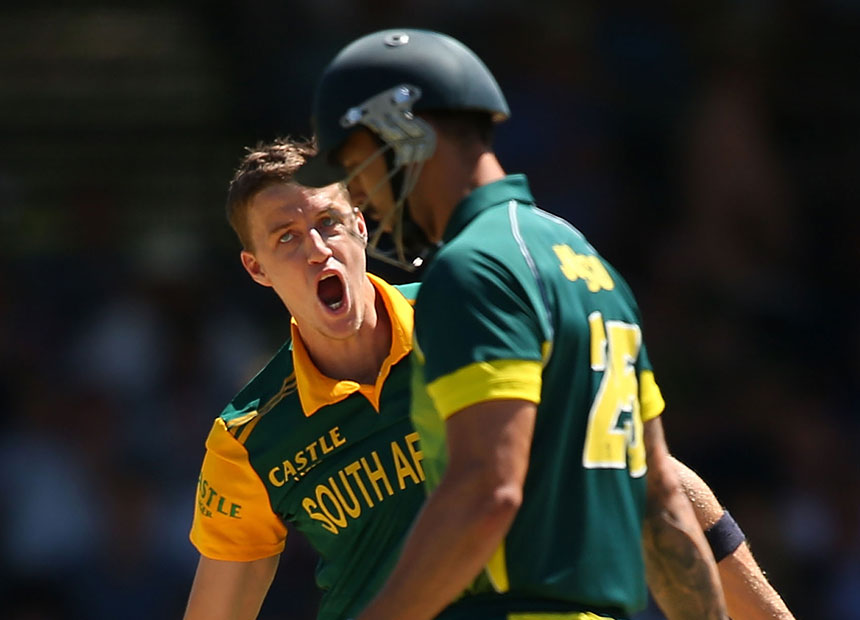 Not long after Pakistani spinners reigned supreme in the UAE, and only days after Rohit Sharma’s Himalayan 264 in a one-dayer for India, cricket was a fast bowler’s game once more at the WACA on Sunday.

And it was a more than entertaining interlude.

The giant Morne Morkel produced a blistering spell of 5-21 off eight overs as the high-pedigree South African pace attack exploited the fastest pitch in world cricket to blast Australia out for 154.

The tourists knocked off the runs with more than 22 overs remaining, levelling the best-of-five series at 1-1, but it was by no means the canter that might indicate.

They lost seven wickets along the way as Josh Hazlewood ‘did a Morkel’ of his own, snaring 5-31 to destroy the backbone of the South African batting.

In fact, even with only a handful of runs needed, the game was alive until Dale Steyn hit the winnings runs, such was the regularity with which wickets were falling and balls were flying over, through and to the catching cordon.

Between them, Morkel, Steyn and Vernon Philander took 9-72, while Hazlewood, MItchell Johnson and Nathan Coulter-Nile did a similar, if less spectacular, job for Australia.

All up, there was little respite for batsmen on either side.

After the run feasts that have dominated international cricket of late, it was a joy to watch batsmen jumping about uncomfortably as the big quickies steamed in to enjoy their moment in the sun.

The Australians, who needed wickets not containment, at one stage deployed four slips, a rarity in the often defensive one-day game.

In the Australian innings, only the inexperienced Mitchell Marsh played with any sense of control, top scoring with 67 (88 balls), an innings that combined great composure with a late, but all-too-brief, assault on Steyn, including a massive round arm six down the ground.

Others, such as Steve Smith and George Bailey, struggled to control the pace and bounce sending attempted pull shots down the throat of mid-on, although the latter, deputising as skipper for the injured MIchael Clarke, did contribute 25.

Hazlewood made the early breakthrough, finding the edge of Quinton de Kock’s bat, with Shane Watson jumping to take a spectacular overhead catch at slip.

He also dismissed Faf Du Plessi (19) and Farhaan Behardien (0) in consecutive balls, and then removed the brilliant AB de Villiers, caught behind for 48 (61 balls) on the charge, to make things really interesting.

With Peter Siddle under pressure to retain his place in the Australian Test line-up, it was an excellent audition for Hazlewood, who at 23, has long been spoken about as a potential Test bowler.

Meanwhile, with Clarke’s troublesome hamstring putting him in doubt for the first Test against India starting on 4 December, South Australian Callum Ferguson, batting in the key No.3 position, made a timely 137 not out against Victoria in the Sheffield Shield match at the Adelaide Oval.

Another perennial Test contender, Phil Hughes, made only seven, and was removed by Siddle, who has 1-34 from 17 overs.