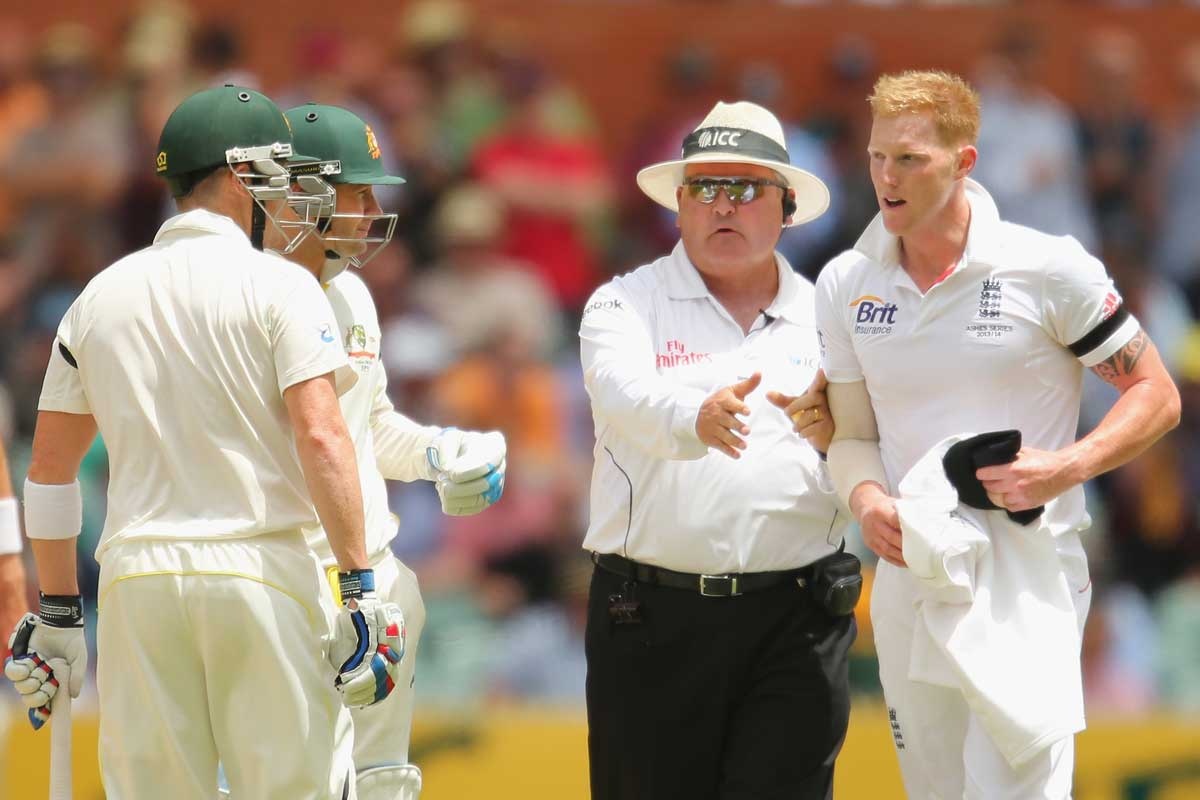 Am I the only one feeling uneasy about the way this Test series has descended into a snarling sledgefest and how cricket, 2013 Australian-style, has become a contact sport?

Am I the only one with a slightly hollow feeling as we take a 2-0 series lead to Perth, the Ashes almost in our keeping?

Or do all the people calling radio sports shows and saying ‘bewdy Clarkey’, ‘onya Mitch’ and ‘stick it right up ’em’, really represent the great Australian sporting public? Does ‘win at all costs’ actually mean debasing ourselves in this way in pursuit of victory?

Seeing Mitch Johnson run in to Joe Root on Sunday and then give him a mouthful after every second ball became utterly tedious and made me want to watch something else.

The Channel Nine camera at mid-on showed the slips cordon behind the right-hand batsman and there was Shane Watson – our Watto – mouthing off incessantly from second slip at Root, Pietersen, Ben Stokes and anyone else at the striker’s end.

The yapping got so much at one point between overs that Pietersen, no-one’s idea of Kofi Annan, told Watson to pull his head in and shut up.

Standing at first slip was the Australian captain Michael Clarke, fined in the last Test for his ‘broken arm’ threat, (later contritely saying “I respect that there is a line and both teams shouldn’t overstep that line”) and the keeper of Cricket Australia’s (almost worthless) Spirit of Cricket code, as mute as Marcel Marceau.

There were those unedifying scenes later when Clarke and Matt Prior – no shrinking violet himself – had a mid-pitch set to. Then Ben Stokes and Johnson collided mid-pitch which sparked off more unpleasantness.

And then the low point, the running spat between Stuart Broad and Mitchell Johnson, and Prior and Brad Haddin and many other spotfires besides, as the two teams left the Adelaide Oval after stumps were drawn.

We’ll always have blockheads like Terry Alderman on ABC Radio parrotting the old ‘gee, this is good, hard cricket’ nonsense, but there comes a time when the ICC must step in and say, ‘Guys, enough’s enough, this is not a great look, cut it out’.

Cricket Australia can’t be trusted to sort the mess out. As they marvel at their TV ratings, and count their gate receipts, they’ll secretly be hoping the aggro and antagonism continues. It’s good for business.

The protagonists themselves – last night it was Peter Siddle and Joe Root who fronted the post-match media conferences – will always maintain it’s good, clean fun, and no harm ever comes of it.

Siddle said in his conference (and I quote indirectly), “this sort of thing’s been happening forever and a day. This is Ashes cricket, this is what it’s all about, it’s war out there, besides a bit of argy-bargy never hurt anyone, what goes on out in the field stays out in the field …. yada yada etc etc.”

What self-serving rubbish. I’d like Peter, or anyone else for that matter, to point me in the direction of any Ashes footage that shows scenes like we witnessed yesterday. (And, no, we’re not counting those involving Javed Miandad or Curtly Ambrose).

When Dennis Lillee and Jeff Thomson were running amok in 1974-75, they largely let their bowling do their talking for them. There was the odd snarl here and there – mostly aimed at Tony Greig – but by and large it was kept in check. Glenn McGrath, Merv Hughes and Shane Warne spat, swore and sledged far too often but even then play never degenerated into outright hostility (although Andrew Hudson would beg to differ).

Yes, the English have their fair share of yappers – Broad, Prior, Pietersen and Anderson among them – and I know that they were in full voice in the home series earlier this year, so all the blame can’t be sheeted home to the Australians.

But virtually all of the flare-ups in this series have been when the 11 Australians are in the field and up against two English batsmen. With Johnson bowling 150kmh, and the batsmen outnumbered 11-2, who among the Three Lions is going to instigate the sledge?

The behaviour of the two captains, the two men charged with the responsibility of keeping some decorum on the field, has also been telling: Alastair Cook, in spite of his woeful form with the bat, has exuded an air of calm; Clarke, however, seemingly has no concept of the responsibilities that go with his role. Rather than moving in and extinguishing these flare-ups, he’s helping to infame them.

I’m not sure what the two umpires, Sri Lanka’s Kumar Dharmasena and South Africa’s Erasmus, are doing out there to restore calm, but whatever it is, it’s not working. Little wonder one of the questions yesterday on Cricinfo’s #politeenquiries segment was: ‘What is the point of Dharmasena?’

I had hoped ICC match referee Jeff Crowe would today step out from his anonymous and well-appointed box at the Gabba, turn his megaphone on full volume and make a very public statement about where the ICC stood on this sort of behaviour.

Well, he did just that, but the message wasn’t quite the resounding proclamation I’d imagined. In fact, I’ve heard mice squeak louder.

Johnson and Stokes were both hit with a level-two charge (by the umpires) for ”making inappropriate or deliberate contact”, an offence which carries a fine of up to 100 per cent of the player’s match fee and/or a ban of one Test. But Crowe is reported to have dismissed the charges, and both players are now free to play in the third Test in Perth.

So the most ill-tempered Test of recent times has come and gone with not one sanction handed down, nor one word of reproach.

In the absence of any leadership from the game’s governing body, we just have to hope that Australia, clearly the superior team so far on the back of Johnson’s remarkable transformation, reconnects with the Spirit of Cricket over the next four days and goes on to win the Ashes with some new-found good grace.