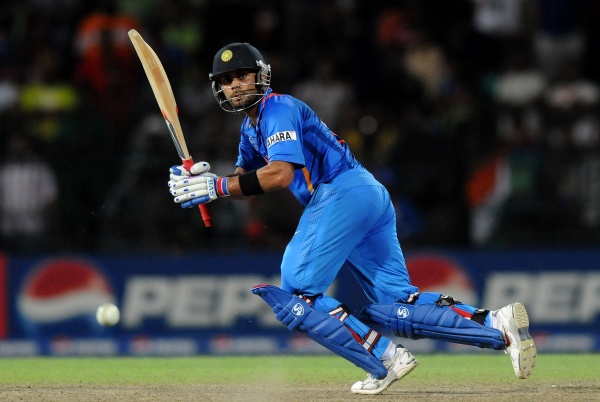 Set a mammoth 360 for victory, after George Bailey (92 not out) and Phil Hughes (83) fired Australia to 5 for 359 from their 50 overs, the task seemed insurmountable during the break of innings.

In the end India did the unthinkable – cruising to a nine-wicket victory with 39 balls to spare, thanks to spectacular centuries from Rohit Sharma (141 not out) and Virat Kohli (100 not out) to go with Shikhar Dhawan’s 95.

At the half-way mark, everything pointed to Australia taking a 2-0 lead in the best-of-seven series.

Every member of Australia’s top-five passed 50, the first such instance in one-day international history, as the score ballooned to their equal sixth-highest international total.

To that point it was also the highest ever score at the Sawai Mansingh Stadium.

What happened next was something Australian cricket fans are becoming increasingly familiar with, having now conceded the four highest one-day chases of all time – all since 2006.

The same small boundaries and docile wicket that eased Aaron Finch, Shane Watson and Glenn Maxwell to half-centuries soon turned against the Australians.

The hosts came out all guns blazing in response, with Dhawan and Sharma putting on a 176-run opening stand.

That was to be outdone by Sharma and Kohli, who piled on 186 at nearly 11 runs an over to close out the game in devastating fashion.

The tourists will rue a missed opportunity to remove Dhawan when he was on just 18.

Wicketkeeper Brad Haddin dropped Dhawan when the 27-year-old hit a massive leading edge off Clint McKay (0-64) that soared soared high into the air.

So high Haddin had enough time to reach square leg to field it – but he made a meal of it and the ball bounced out of his gloves.

It proved costly, with Dhawan making the Australians pay to the tune of 95 runs – scoring 77 after Haddin’s error.

The Australian vice-captain appeared to have redeemed himself with a brilliant stumping when Dhawan was on 42, quickly whipping the bails off after Xavier Doherty (0 for 70) sent a dart wide outside off stump.

Replays showed the decision could not have been closer and after three minutes of deliberation the third umpire ruled Dhawan not out.

Perhaps an extra frame would have worked in Australia’s favour.

But by then, the tide had turned and the momentum was firmly with India.

Not even Dhawan’s dismissal to James Faulkner (1 for 60) could stem the bleeding, with Virat Kohli joining the onslaught with a ruthless 52-ball century that included seven sixes – one so large it nearly left the ground.

Kohli’s was the fastest ODI century by an Indian, and comfortably the fastest ever scored against Australia.

Between both sides, a remarkable 23 sixes and 75 fours were hit on the day.