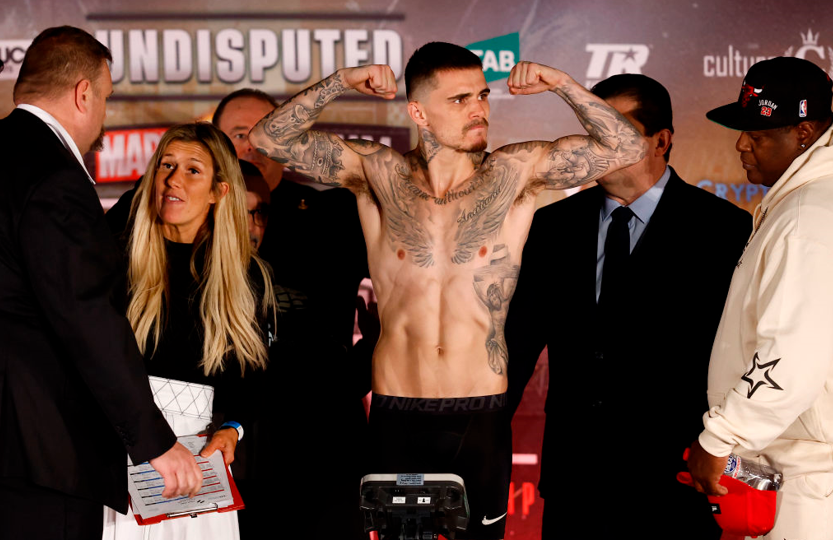 George Kambosos casts a ferocious eye at his opponent's camp after making the weight limit at his second attempt. Photo: Getty Photo: Getty

Aussie slugger George Kambosos Jr has averted disaster, then claimed it was all a deliberate ploy.

Kambosos’ unification world title fight with American Devin Haney will proceed on Sunday after the Australian dramatically came in under the required maximum weight at the second attempt.

In chaotic and explosive scenes at Margaret Court Arena, Kambosos initially missed the 135lb limit for the lightweight blockbuster, tipping the scales at 135.36 pounds.

But he returned 70 minutes later on Saturday after a hot shower and “a piss” at 134.46 pounds to keep alive his dreams of becoming the first boxer in the 18-year four-belt era to unify the lightweight division.

Kambosos then raised his arms in triumph and gestured a throat-slit towards Team Haney.

“Changes nothing. It changes his mindset now. Trust me. Art of war. Deception,” Kambosos said.

“Bring it on. More than ready. Let’s go.

“Let them believe that (was a mistake). Everything is for a cause, for a process. Trust me, tomorrow, just be there.”

Looking to defend his three world title belts and take Haney’s WBC strap, Kambosos even removed all of his clothing as two guards tried to shield his naked body from cameras with towels.

But he was still over the limit on his first weigh-in attempt.

“Maybe I did it on purpose,” Kambosos said before explaining how he made weight the second time.

Officials pleaded with fans not to storm the stage when Kambosos emerged for his second weight attempt, with many Greek supporters chanting their hero’s name.

Haney weighed in at 134.92 pounds and slammed Kambosos, tweeting a clown emoji before calling the Australian a “bitch”.

“We trained for six to eight weeks to be prepared to make weight on our first go, so I told him he’s not a true champion and he’s a bitch.

“He’s mad about it. He’s upset he didn’t make the weight so’s trying to do anything to get down.

“At the end of the day we’re going to fight tomorrow whether he makes weight or not.”

When the combatants faced off one last time, Kambosos’ father, Jim, almost clashed physically with members of Haney’s entourage.

It’s understood the unification bout still would have gone ahead at Marvel Stadium even if Kambosos didn’t make the weight, but the Sydney slugger would have been stripped of his belts regardless of the outcome.

Meanwhile, Haney’s trainer father, Bill, has finally been granted a visa and will make a mad dash from Las Vegas to Melbourne for the fight.

The elder Haney was originally denied a visa due to a 30-year-old drug conviction.