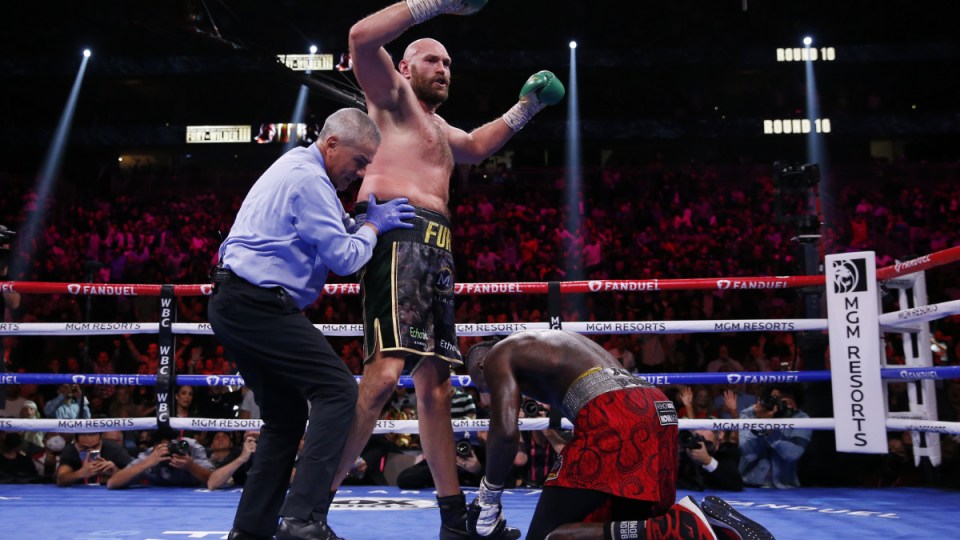 Tyson Fury has stopped Deontay Wilder in the 11th round to retain the WBC heavyweight title. Photo: AP

Tyson Fury has risen from two fourth-round knockdowns to stop Deontay Wilder in the 11th round, retaining his WBC title in a thrilling conclusion to a superlative heavyweight trilogy.

Fury (31-0-1, 22 KOs) finished Wilder for the second-straight time in their trilogy, but only after a wild back-and-forth bout featuring five combined knockdowns in Las Vegas on Saturday night.

“It was a great fight,” Fury said.

“It was worthy of any trilogy in the history of the sport. He’s a top fighter, and he gave me a real (test) tonight.”

Wilder was knocked down in the third round and appeared to be on his way out, but he improbably rallied to knock down Fury twice in the final minutes of the fourth round.

Wilder (42-2-1) absorbed enormous punishment and appeared to be physically drained for much of the bout, but the veteran champion showed his toughness while still throwing power shots on weary legs.

Fury knocked down Wilder again with a concussive right hand midway through the 10th, but Wilder stunned Fury in the final seconds.

Fury finally finished it in the 11th, sending Wilder face first to the canvas with a chopping right hand fired from high in the air.

Fury climbed onto the ropes in weary celebration before a frenzied crowd of 15,820 at T-Mobile Arena on the south end of the Las Vegas Strip.

“Don’t ever doubt me when the chips are down,” Fury said.

“I can always deliver.”

Fury then broke into a rendition of Walking in Memphis, in keeping with his post-fight tradition of serenading his crowds.

The fight likely concluded one of the most memorable heavyweight rivalries in recent boxing history.

A trilogy is a rarity in the fractured modern sport, but Fury and Wilder brought out the best in each other through a series spanning nearly three calendar years.

They met first in late 2018 in downtown Los Angeles, where Wilder knocked down Fury twice in the late rounds of an excellent fight.

The second knockdown in the 12th round left Fury flat on his back and motionless while Wilder celebrated, but Fury improbably rose and reached the bell in a bout judged a split draw.

The second bout was in Las Vegas in February 2020, and Fury’s dominance was clear.

The British champion battered Wilder until the seventh round, when Wilder’s corner threw in the towel on a one-sided victory and Fury claimed Wilder’s WBC title belt.