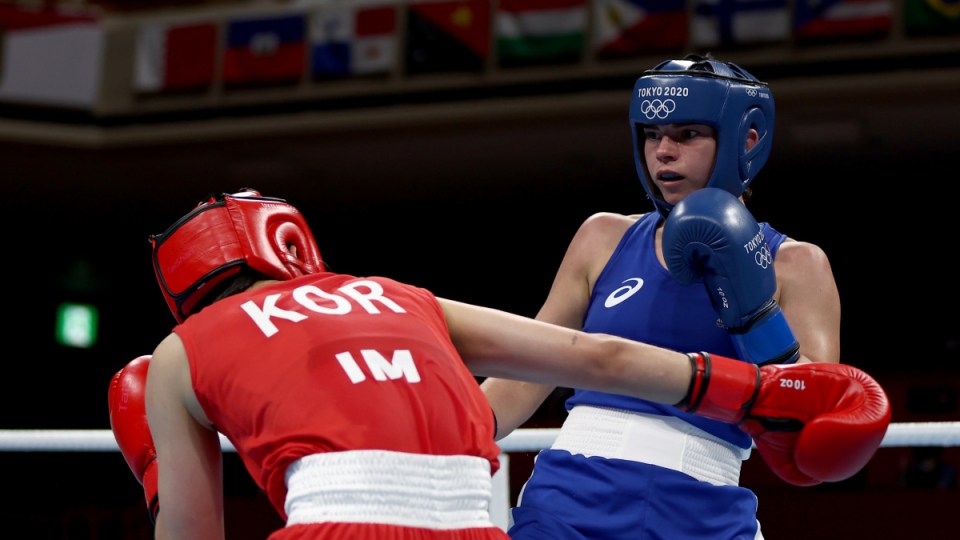 Australian featherweight Skye Nicolson has advanced to the quarter-finals of the Tokyo Olympics, recording a hard-fought and emotive victory over South Korean Im Aeji.

Nicolson is just two wins away from reaching the gold-medal bout, while the first, third and fourth seeds have notably already been eliminated from the tournament.

Nicolson was all smiles after her split-decision triumph on Monday night, having lifted when it mattered most to ensure every judge deemed her the winner of the deciding final round.

Skye is fighting Aeji Im of Korea in the round of 16 in the featherweight (54-57kg) 🥊#TokyoTogether #Tokyo2020 pic.twitter.com/hVFi7SOp5Y

The 25-year-old celebrated at the Kokugikan Arena then turned to the camera, wishing her father happy birthday before blowing a kiss.

The Queenslander is following in the footsteps of her late older brother Jamie, who boxed for Australia at the 1992 Olympics.

Skye’s brothers Jamie and Gavin tragically died in a car accident while en route to boxing training in 1994, a year before she was born.

“It’s so special I can have this connection to Jamie,” Skye Nicolson said earlier this year.

“And for sport to have that power to build such an ongoing connection between us.”

Your winner by split decision, and moving into the featherweight quarter finals…@AUSOlympicTeam's Skye Nicolson!#Tokyo2020 | #7Olympics pic.twitter.com/owr4qHzTyi

Nicolson and Im clashed in the round of 16 having both benefited from an opening bye.

Nicolson landed a jab to the face late in the second round then connected with a few lefts in the final round to trump the South Korean, who was warned over a punch to the back of the head early in the fight.

But the remaining four judges gave the victory to Chinyemba, whose fancy footwork and reach helped secure a spot in the round of 16.

Australia's Alex Winwood is in action against Patrick Chinyemba!

Chinyemba was adjudicated a 29-28 winner on three scorecards, while that was the same margin that Naklam settled on.

Winwood rallied after being outgunned in the opening round, winning the second round in the eyes of all but one judge.

But the 24-year-old West Australian failed to land enough blows to achieve the same result in the deciding round.