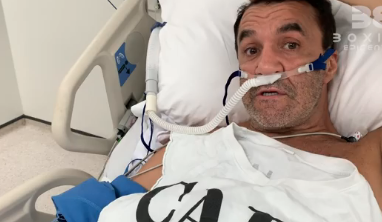 Australian boxing champion Jeff Fenech has undergone heart surgery on an infected valve in Thailand as he is treated for pneumonia. Photo: Facebook

Australian boxing legend Jeff Fenech has undergone surgery on a blocked heart valve in a Bangkok hospital as he is treated for pneumonia.

The 55-year-old underwent a five-hour procedure on Tuesday night after antibiotics failed to mend an infected valve leading to his heart, daughter Kayla said.

Fenech, now a trainer, was in Thailand for a training camp when he fell ill.

Kayla said the surgery was a success but she was yet to speak with her father, who will now miss daughter Jess’ wedding.

Fenech had ignored his discomfort for several days before surgery, unaware of the severity of his problem, she said.

“We landed and literally rushed to the hospital and got there, thank God, he was feeling okay, I guess he was scared. It was good to speak to him and give him a hug before he went in,” Kayla told the Nine Network.

“We’ve never seen him like this before so it’s hard for all of us and especially he’s definitely not attending my sister’s wedding, it’s a really hard time.”

Wife Suzee is also reportedly in Thailand with her husband.

Aussie boxing great Jeff Fenech has emerged from successful lifesaving surgery in Bangkok. 5 hours to replace infected heart valve and drain lung fluid. Beautiful moment when his three children flew in and made it to see him just 10 minutes before surgery. pic.twitter.com/Qv9zuTgWat

“I’ve got some pretty bad news, I’ve got an infected valve that’s connected to my heart,” an emotional Fenech said in a video by Boxing Epicentre.

In his 33-fight professional boxing career, Fenech won 29 bouts, including 21 knockouts, represented Australia at the 1984 Olympic Games and was a world champion in three weight divisions.