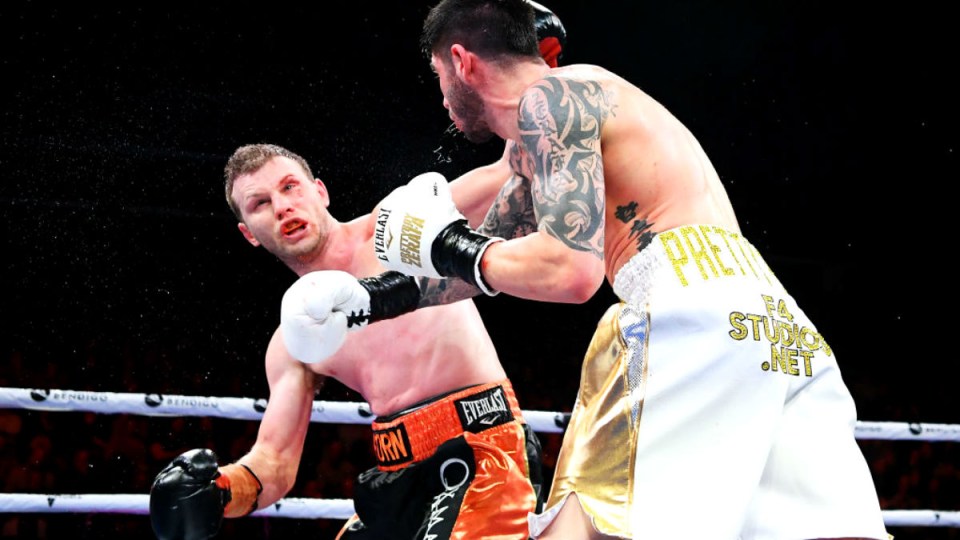 Michael Zerafa lands a punch to Jeff Horn during the Australian Middleweight bout between at Bendigo Stadium. Photo: Getty

Former world boxing champion Jeff Horn says he is more motivated than ever to face Michael Zerafa after copping flack from his opponent’s camp for demanding a re-match.

Horn announced he would invoke a contract clause and fight Zerafa again, likely in December, after suffering a shock middleweight loss in Bendigo in August.

But Zerafa’s trainer Sam Labruna wasn’t happy, accusing Horn of being “un-Australian” for ordering the re-match and denying his charge a big-money world title fight in Japan.

Labruna claimed on social media they had pleaded with Horn’s camp to let Zerafa take up a lucrative WBA middleweight title fight with Ryota Murata, only to be knocked back.

“We meet with Team Horn and plead with him to let Michael Zerafa take this money and opportunity so Michael can get a deposit for a home,” he posted on Facebook.

“Jeff Horn comes back and denies Michael Zerafa the opportunity and enforces a re-match – how very un-Australian is that?”

Horn admitted he was offered big-money fights in the US but wanted a re-match, saying it was the only bout that would motivate him to get back into the ring.

“I did consider giving him that opportunity. He has a world title on the board and it was a hard one for me,” he said.

“But it was like ‘can I get motivated to fight one of these other guys in the US?’ which they offered me to step out of the way but I just couldn’t get myself motivated to do that.

“I need to fight Zerafa again. I really needed to get this back and have the slate clean.”

Horn said he was now more pumped up than ever to face Zerafa after reading the social media criticism.

“It does make it easier to get into the gym when they are calling me all these names,” he said.

“His team have had a lot to say and have been pretty harsh with their words but it was in the contract.

“And he is always going to get big opportunities if he beats me in the re-match – but he has got to beat the real me the second time.”

Horn admitted he underestimated Zerafa in August – a mistake he won’t be making again.

“I was a little bit guilty of cutting corners the last time, nothing massive but little things that made me mentally underestimate Zerafa and he proved his point on the night, so good on him,” he said.

“It was embarrassing (August loss). I definitely didn’t fight the way I normally do.

“But I have a hunger … to get that win back and a world title after that would be great.”

.@jeffhornboxer will forgo retirement to step back into the boxing ring against Michael Zerafa following his defeat in Bendigo. “I’m hungry for the win on this one, I hate losing.” https://t.co/XE83Oq2gFf #7NEWS pic.twitter.com/Kr2T1V3Lnz

A date and venue are yet to be determined for the re-match.

Horn said he hoped to fight at super welterweight but would still be confident if Zerafa insisted on staying at middleweight.