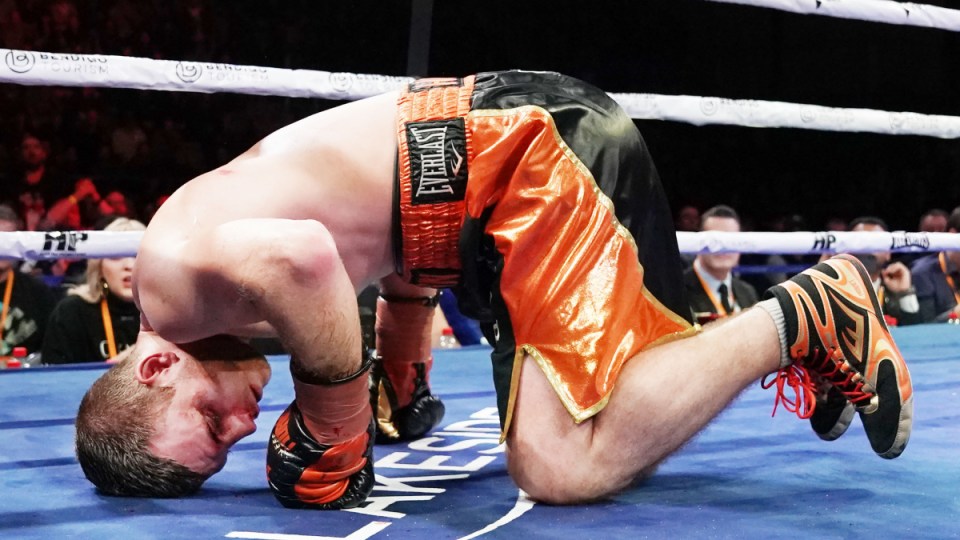 Jeff Horn hits the deck against Michael Zerafa at the 'Battle of Bendigo'. Photo: AAP

Boxing star Jeff Horn has collapsed in defeat in one of the biggest upsets in Australian boxing history.

The man who controversially conquered Manny Pacquiao in 2017 was outboxed by unknown Michael Zerafa in the Battle of Bendigo on Saturday, raising questions over his future.

While there was a a rematch clause in the contact, Horn isn’t sure if he will exercise it.

The ex-champ’s trainer, Glenn Rushton, says it’s a matter of hunger and preparation, not talent, saying Horn needed to focus on commitment.

“‘We’ve got to sit down and have that long, hard talk and say exactly what does that look like, diet-wise, work-wise, and really put the effort in,” Rushton said.

“If it’s going to be at middleweight it means we’ve got to change the body structure a little bit and not eat pizzas and drink Coke … you’ve obviously got to be very disciplined.”

The sensational upset in Bendigo was Horn’s first loss to an Australian professional.

As his distraught family watched – and father Jeff Snr demanded an end to the fight – the Queenslander struggled throughout before he was stopped in the ninth round and slumped to the canvas.

Horn’s mother and wife Jo were screaming in anguish as they watched Horn take blow after punishing blow, barely able to stand.

His brother Ben threw a towel into the ring while a wobbling Horn was convincingly outboxed as his 27-year-old opponent from Melbourne took the biggest scalp of his career.

There was trouble for Horn from the outset when he was dropped by a chopping right hand in round two.

He was finished off in the ninth round when a barrage of shots following the knockdown prompted the referee to halt the bout at Bendigo Stadium.

The shock defeat raises questions about the future of Australia’s biggest boxing star and his shot at a middleweight world boxing title this year.

He had been eyeing a fight against world middleweight champ Ryota Murata in Japan in December, with $2 million prize money.

“I called this weeks ago, I said Jeff will fall and I went out there and proved it,” Zerafa said.

At the time of the stoppage, Zerafa was ahead by three on two judges cards and seven on the third.

Horn got tagged with some more rights in the fourth and Zerarfa was popping his left jab into the Queenslander’s face.

Horn worked his way back in the fifth and started the sixth well but the Victorian came back strongly near the end of the latter round.

Zerafa landed some more big rights in the eighth and by the end of that round he was showboating to the crowd.

After the match, Horn questioned his food intake in the hours leading up to the fight and said he felt sluggish during the bout.

“‘I felt like I couldn’t get my shots off, they weren’t landing as good as I wanted, it was frustrating me from pretty much the beginning,” he said.

His coach, Glenn Rushton, said Horn had just an eight-week preparation after taking three weeks off for the birth of his second child and needed everything to go right, but suffered from sniffles and a sore throat last Monday.

“I don’t want to use the excuse: ‘I’ve been sick’, all props to Michael Zerafa for winning the fight,” Horn said.

Having previously indicated a desire to get out of boxing before it destroyed him, Horn said he would consider his future.

A triumphant Zerafa said he had always believed he was capable of an upset.

“What an experience. I knew this coming in all along,” news.com.au reports Zerafa said. “I saw it, I dreamt it. I’ve got the best team in the world, man.

“I knew this. I’m not surprised, I knew it all along.

“This is electric. I just want to thank everybody that has believed in me and stuck by me since day one. It’s been the longest journey of my life.

“I’ve dedicated my whole life to this.”