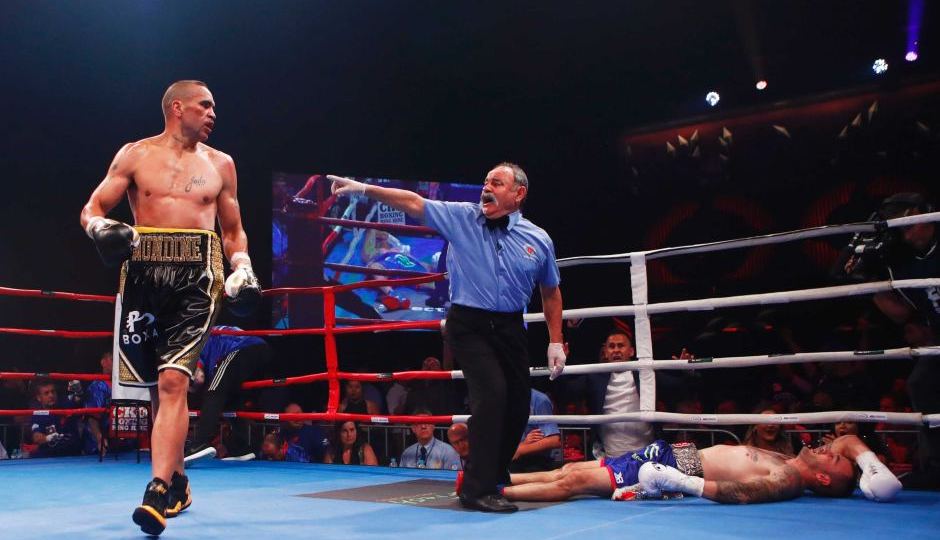 Anthony Mundine has kept alive his hopes of a fight against Jeff Horn with a second-round KO over former featherweight world title contender Tommy Browne in Sydney.

Mundine, 42, backed Browne up on Wednesday night in the closing seconds of the round, tagging him with several shots, before flooring him with a left hand to the head right on the bell.

He wins the vacant WBO Oriental middleweight title, notching his first win in more than three years and his first stoppage in four years.

Browne was the aggressor in the first round at The Star in Sydney, backing up the three-division major belt holder and tagging him with some shots.

But 42-year-old Mundine started to find the range with his jab in the second round and stunned Browne with a right-hand shot in the closing moments.

He tagged him several times, before flooring him with a left hand to the head right on the bell.

“I had him hurt and, when I caught him with a right hand, I knew it was a good state and I came in to finish it.” Mundine said.

Mundine called out WBO welterweight champion Horn after the bout.

Horn is on the verge of signing for a title defence against American superstar Terence Crawford, but Mundine has suggested he should fight him first.

“I think the boxing public and the whole of Australia would love that domestic fight showdown,” Mundine said.

“He can fight Crawford after me. I think we all want that — let’s get it done.

“If Green don’t want me to fight him again, I may retire.”

Mundine, who has fought at super welterweight, made it clear he wouldn’t be prepared to drop down to that level or welterweight to fight Horn but was confident they could reach an agreement.

“Does he (Mundine), stay healthy, does he have the money, all these sorts of ifs and maybes; we’ll just see,” Rushton said.

“But at the moment our focus is on Terence Crawford, Mundine is a maybe.”

Rushton had no doubt about the outcome if the fight did happen.

“Jeff knocks him out, it’s as simple as that,” he said.

“The one time they sparred I said to Jeff, ‘Just back off him, you’re making him look a bit silly.'”

“I’m an extraordinary athlete, age don’t bother me,” he said.

“At the moment I’m ageless. I feel like I’m better now as a fighter, more seasoned.

“I’ve been through one generation, bring on the next generation.”