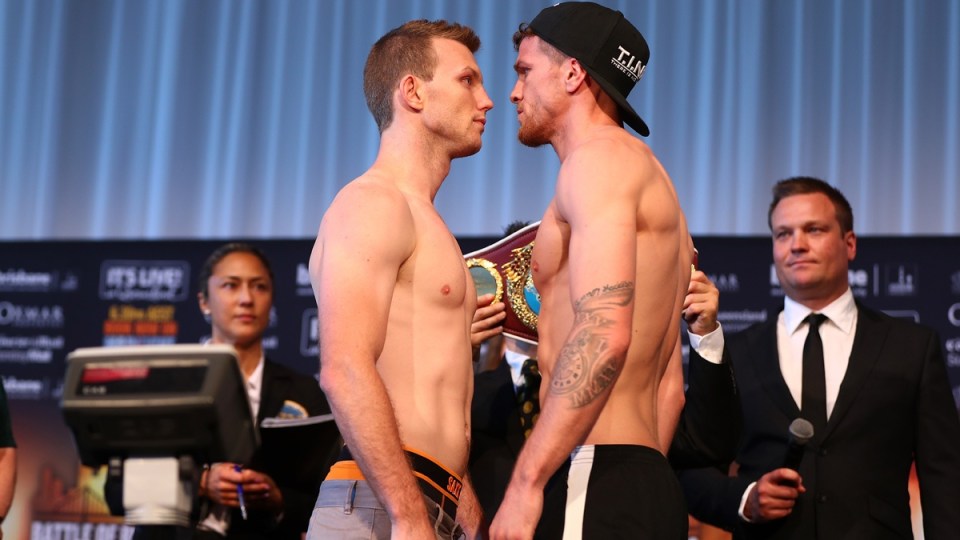 Horn and Corcoran at Tuesday's weigh in. Photo: Getty

Australian boxer Jeff Horn knows the dangers of underestimating an opponent, having exploited Manny Pacquiao’s false confidence in July’s famous ‘Battle of Brisbane’ to win a world title fight that would change his life forever.

Pacquiao said afterwards he “did not expect” Horn to be so tough, while the Filipino’s long-time strength and conditioning coach added Horn “fought better than we ever thought we would”.

It was a mistake that may end Pacquiao’s career, and one that made Horn such a household name in Australia that he told The New Daily in September that he “can’t even go to Woolworths with my wife” anymore.

The 29-year-old has won a swag of sporting awards since as his career, seemingly set for international superstardom, gathers pace, but it will undoubtedly slow if the Queenslander can’t defend his world welterweight title against Englishman Gary ‘The Hellraiser’ Corcoran on Wednesday evening.

A pre-fight injury may make Horn’s task tougher than many expect, according to former world champion Barry Michael, who said he will be affected by a cut above his left eye that required eight stitches and interrupted his training.

“There’s no way that can be healed,” Michael told The New Daily.

“That might take three months to heal – not three weeks.

“That’s a pretty big cut and will never be the same. It can always open.

“I’m worried about the cut and it’s a dead set certainty to open. Corcoran throws punches non-stop and is a rough opponent.

“So Jeff will be cut and then it can become a really dangerous fight.”

Horn’s struggle to make weight has slightly concerned Michael, given the lead-in time for the fight, but he still thinks the Aussie will prove too good.

“There’s been a lot of talk with Jeff seriously struggling to make weight,” he said.

“But if Jeff is on form, he has too much firepower. He has better punches and all things equal, he should stop this bloke.

“Corcoran’s a chance and in boxing, anything can happen. He lives in a caravan … it’s a great story.

“But Jeff should be confident. When I won my world title, I was that determined to defend it. I was in brilliant condition and in boxing, so much is mental and psychological.”

Much of the pre-fight build-up has centred on the allegation from the Corcoran camp that Horn is a “dirty fighter” who uses his head too much when in close proximity with his opponent.

Corcoran’s co-trainer Frank Greaves also showed journalists vision of Horn’s past fights, and vision of him leading with his head, before producing a baseball cap with a boxing glove on it and placing it on his own head.

Aussie boxing icon Michael rejected that talk, despite admitting that “Jeff is pretty good with his head”.

“It’s not a dirty tactic. It’s one of those things,” he said.

“When you’re in the clinches, heads bang. Jeff’s not deliberately dirty.”

Horn said the talk was “frustrating”, perhaps giving him more motivation before the much-anticipated fight at the Brisbane Convention and Exhibition Centre.

Michael hopes Horn wins – and wins well – to help boxing’s “resurgence” Down Under.

“Jeff is carrying the weight of the boxing community in Australia right now,” he said.

“There’s been a bit of a resurgence in Australian boxing and it’s down to Jeff, who is a clean-cut and intelligent school teacher who just happened to beat one of the greatest fighters ever. It’s fantastic.

“And Jeff’s got a bomb in his right hand. He is a hell of a puncher. I think Jeff will stop him – and within the first six rounds. He has the power.”