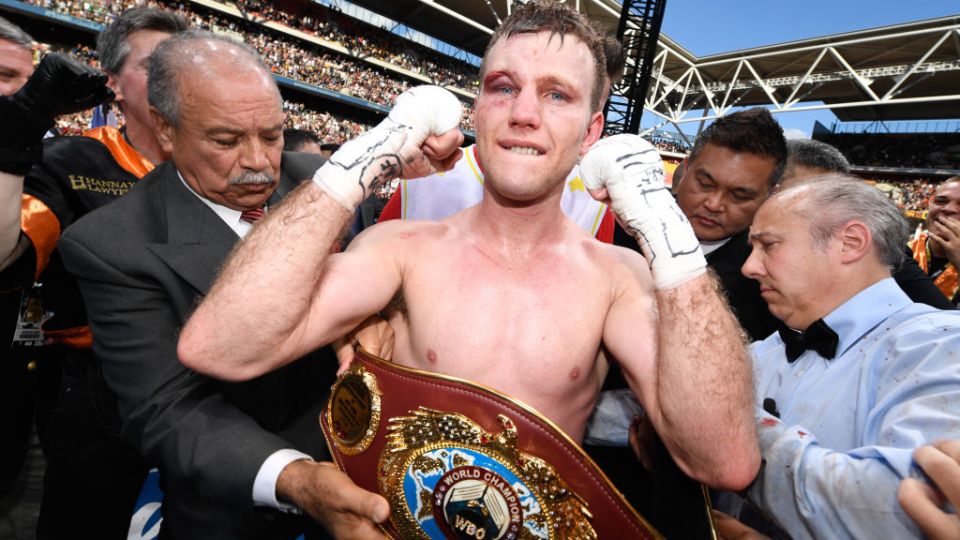 Horn claims his belt after his unanimous victory over Pacquiao at Brisbane's Suncorp Stadium. Photo: Getty

Speculation over future big-money fights has become a distraction for Jeff Horn ahead of next week’s WBO welterweight world title defence against unheralded British foe Gary Corcoran in Brisbane.

Horn admitted he was also struggling to make weight for the December 13 bout.

If Horn defeats the Brit, the 29-year-old is set to take on the highly-rated Crawford in Las Vegas in April.

Khan – currently on the Gold Coast shooting UK TV show I’m a Celebrity Get Me Out Of Here  – has also been sounded out for 2018 and is tipped to attend next week’s fight.

Horn admitted he still getting used to the constant speculation since his life changed when he upset 11-time world champion Manny Pacquiao in July.

“It’s a distraction when you hear all these guys wanting to fight you but it happens all the time,” he said.

I will just get used to it, worry about Gary and whatever happens after that if I get past him.”

“There’s been a lot of awards nights and functions that I have had to attend but training always comes first and I am fit and ready for a hard 12-round fight.”

Horn tipped the scales at 73kg and needed to lose at least seven kilos in a week to make the cut for the December 13 bout.

“It’s coming down but it is always a difficult task,” Horn said.

“Sometimes I feel it just doesn’t want to come off like I want it to.

“I am about to hit 30 and they say it sticks on you a bit more. Hopefully I feel good on fight day after I make the weight.”