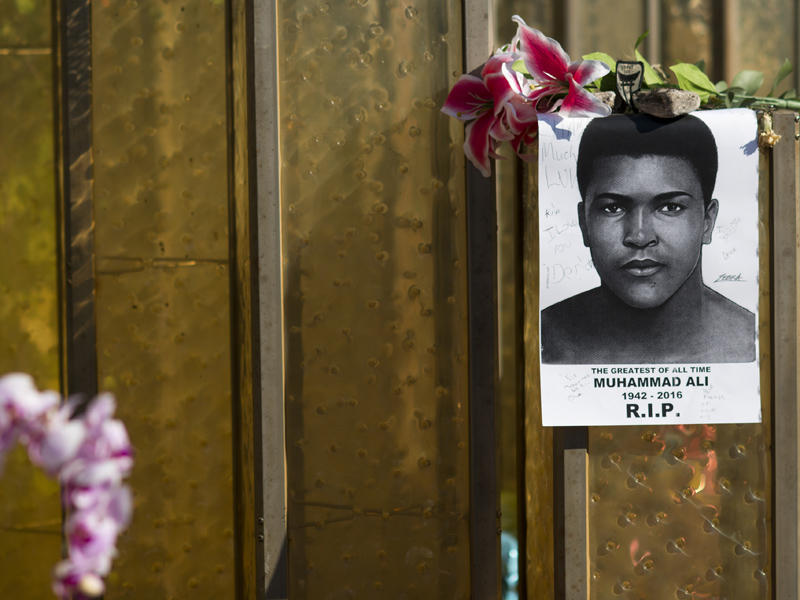 Boxing legend and US icon Muhammad Ali has been farewelled in an emotion-charged memorial service.

It’s estimated 100,000 people lined the streets of his hometown of Louisville, Kentucky on a hot and sunny Friday (local time) to honour Ali, with fans hurling flowers and chanting “Ali, Ali”, along the 37km procession route.

The huge gathering of fans was joined by a cross-section of sports and movie stars, religious and political figures who paid their respects to arguably the greatest sportsman of all time.

Ali died a week ago aged 74, and his passing has underlined his stature as one of the most respected men in the US – a civil rights campaigner who converted to Islam and lost three years in the ring after refusing US military service during the Vietnam War.

As the funeral motorcade wound past his boyhood home, the city’s Muhammad Ali Centre and other important sites in his life, residents held up photos of “The Greatest”, as Ali dubbed himself, while others tried to run or bicycle alongside, as if unwilling to let him go.

Hollywood actor Will Smith and former heavyweight boxers Lennox Lewis and Mike Tyson were pallbearers at the funeral, before an inter-faith service was held at the KFC Yum Centre to celebrate Ali’s life.

About 15,000 free tickets were snapped up for the event, which was attended by celebrities including David Beckham and Arnold Schwarzenegger, and broadcast to millions of viewers around the world.

Speaking at the service, former US president Bill Clinton described Ali as a “universal soldier of our common humanity” who fought heroically against Parkinson’s disease.

“I will always think of Muhammad as a truly free man of faith,” Mr Clinton told the crowd.

“He refused to be imprisoned by a disease that kept him hamstrung longer than Nelson Mandela was kept in prison in South Africa.”

Sportscaster Bryant Gumbel said: “What does it say of a man, any man, that he can go from being viewed as one of his country’s most polarising figures to arguably its most beloved?”

Ali’s widow Lonnie told the service her family were “humbled” by the “heartfelt expressions of love” from around the world since her husband’s death.

“He did not fear death. He saw the good soul in everyone.”

US President Barack Obama sent a letter to be read at the service as he was attending his daughter Malia’s high school graduation ceremony.

In the letter, read by White House senior adviser Valerie Jarrett, the President described Ali as “more original and influential than just about anyone of his era”.

“His jab knocked some sense into us and pushed us to expand our imagination,” President Obama wrote.

Comedian Billy Crystal drew laughter from the crowd when he impersonated Ali on stage in a moving tribute.

“Thirty-five years after he stopped fighting he is still the champion of the world,” Crystal said.

“He was the most perfect athlete you ever saw … and those were his own words.

“He taught us life is best when we build bridges between us, not walls.”

“Only once in a thousand years or so do we get to hear a Mozart, or see a Picasso, read a Shakespeare. Ali was one of them,” Crystal said. “And yet, at his heart, he was still a kid from Louisville who ran with the gods and walked with the crippled and smiled at the foolishness of it all. He is gone, but he will never die.”

In a direct message to her father, Rasheda said: “You were the greatest father to us. It was God’s will to take you home.

Attallah Shabazz, daughter of slain Nation of Islam leader Malcolm X, added: “Having Muhammad Ali in my life somehow sustained my dad’s breath for me just a little while longer — 51 years longer until now.”

The funeral procession and memorial marked the second day of services honouring Ali.

A traditional Islamic prayer ceremony – known as a jenazah – was held on Thursday at Freedom Hall, where Ali made his professional debut with victory over Tunney Hunsaker in 1960.

Ali ‘ran with gods, walked with the crippled’