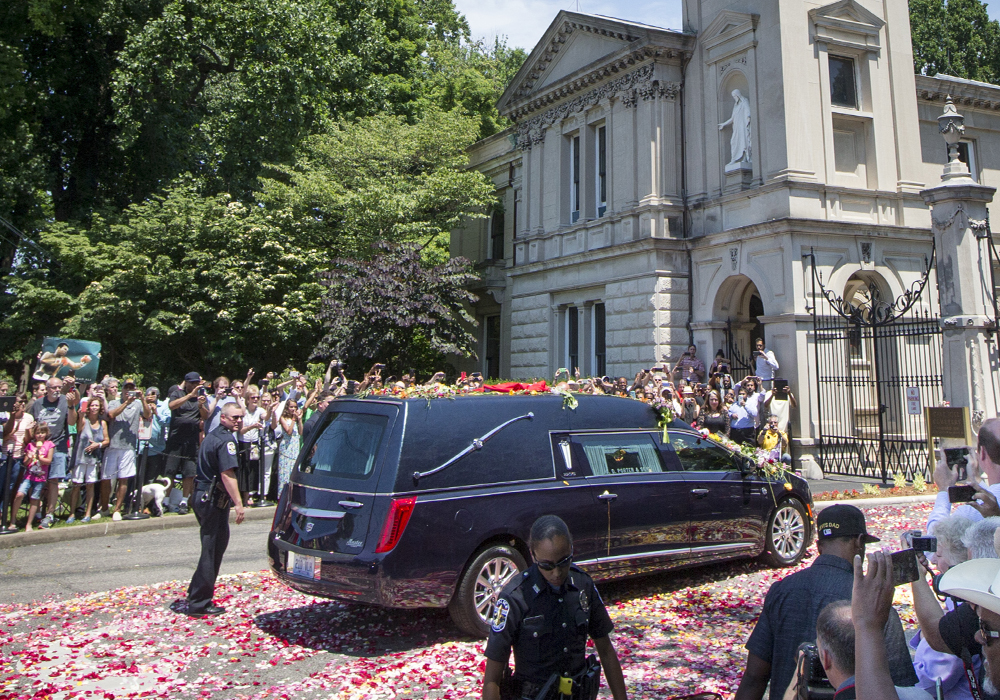 Religious and political leaders of many stripes have joined the sports world and tens of thousands of ordinary mourners to bid farewell to Muhammad Ali, the boxing champion who jolted America with his showmanship and won worldwide admiration as a man of principle.

One of those paying their respects was controversial former champion Mike Tyson, who had been so distressed about Ali’s passing that there was doubt he’d be able to attend the service.

Tyson made a last-minute decision to attend and took a red-eye flight Thursday evening from Las Vegas to get to Louisville.

Tyson was a pallbearer alongside actor Will Smith, boxer Lennox Lewis and some of Ali’s family and friends.

Ali, a once-controversial convert to Islam who lost three prime years of his boxing career for refusing military service during the Vietnam War, died a week ago at age 74 as one of the most respected men in the US.

Fans chanting “Ali!” and throwing flowers lined the streets of Louisville, Kentucky, for a funeral procession on Friday.

Ali’s hearse snaked through the city, pausing for a huge crowd outside his boyhood home, en route to a cemetery for a private burial beneath a headstone reading simply “Ali”.

City officials estimated 100,000 people came out to honour Ali, many travelling from across the country and across the world.

Some tossed flowers atop the hearse carrying his casket as part of an 18-car procession over 37 km in a memorial unlike any other in recent US history.

After Ali’s body was put to rest, former President Bill Clinton and celebrities such as Billy Crystal, Smith and Tyson were among those gathered at a 20,000-seat sports arena for an interfaith memorial service that began with Muslim prayers.

Earlier on a hot day, some 1500 people gathered outside Ali’s boyhood home in a traditionally African-American section of town.

As the hearse arrived, police standing shoulder-to-shoulder cleared a path, much like a fighter’s entourage clears his way to the ring.

The hearse stopped at the pink house as the people, many of whom waited in the sun for more than three hours, chanted his name.

“It was important for me to be here,” said Matt Alexander, 63, who travelled from Florida. “I cried like a baby when I heard he’d died. I just didn’t want to believe it because I wanted him to live forever.”

Rickey Martin, 55, compared him to civil rights leader Martin Luther King Jr. as a towering figure of the 20th century.

“Ali and MLK instilled in our generation that you didn’t just have to sit back and do as you were told,” Martin said. “You could go to school, you get a good job. In the years after segregation … he was an inspiration to all of us.”