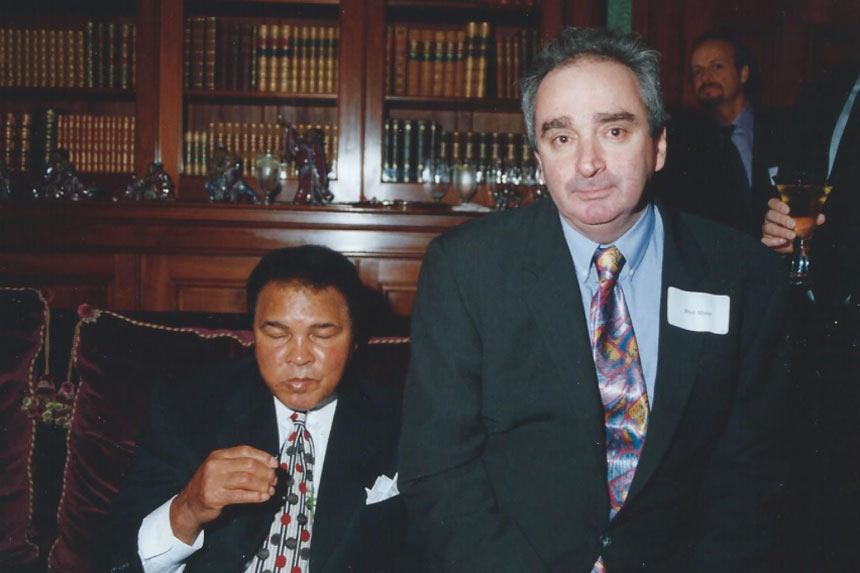 It was a cool autumn night in the United States.

The year was 1999 and at a function near Atlanta, Georgia, I met the greatest fighter of all time.

It was an evening I’ll never forget.

• Revealed: The dark side of Muhammad Ali
• How Ali’s heart kept beating after his body shut down
• Clinton, Crystal to speak at Ali funeral

I was always interested in boxing. My father loved it and would take my brother and me to fights. It was one of the ways we bonded.

We saw names like Johnny Famechon, Tony Mundine and Bobby Dunlop; but, of course, we never saw fighters like Muhammad Ali. There never was one.

So, what was I doing in the US meeting Muhammad Ali?

The occasion was a party to celebrate the opening of a VISY cardboard making plant, thrown by the late Richard Pratt.

The Pratts had spread their packaging behemoth to the US under the control of Pratt’s son Anthony, and the function was part of a campaign to announce their arrival to the locals.

A small coterie of Australian and US journalists were flown in to document proceedings. I was lucky enough to be one of them.

And what a party it was.

Ray Charles had the music covered, delivering a memorable performance.

The 41st President of the United States extolled the virtues of the Pratt family and predicted that his two sons, George W, then the Governor of Texas, and Jeb, then Governor of Florida, would make it to the White House.

I remember being sceptical at the time. But he proved prescient on one count.

There are some tunes that are instantly recognisable.

The theme from Rocky is one of them. When it blared through the room, Muhammad Ali made his entrance.

Instantly, everyone rose to their feet and applauded as Ali weaved his way through the crowd like they were 500 Sonny Listons.

By then, Parkinson’s disease had taken hold in him, making him a bit shaky on his feet. But, on some levels, he still had the magic.

He captivated the audience with his smiles and hellos and even pulled a few mock shape-ups when the moment demanded.

He was introduced to the crowd but, given his condition, he didn’t speak.

I was later offered the chance to share a few words with him in an adjoining room. I didn’t have to think twice.

I strode into the room, said hello and we had a brief conversation about Australia. The experience was bittersweet.

This was the athlete who captivated the world with his power, grace and articulation.

He was, clearly, losing the great gifts of his bodily and verbal prowess. He shook a little – but not all the time.

When I shook his hand, there was a strength there. But the power and flexibility that characterised his fighting days was gone.

He spoke quietly as we made small talk but his heart didn’t seem to be in it.

Whether that was because conversation was by then an effort for him, or he felt depressed or humiliated by his role as what seemed almost a corporate promotional prop, I cannot say.

At that stage, he was doing lots of corporate gigs to help fund life after the collapse of three marriages and caring for nine children left holes in his finances.

He and his last wife, Lonnie, had been befriended by Anthony Pratt, who was based in the United States.

The affection and care between Ali, Lonnie and Pratt did seem genuine.

Nonetheless, it was profoundly sad to see the great man – who used to “float like a butterfly and sting like a bee” – reduced to selling memories of what he used to be.

From afar, he was – almost – the same showman. But, up close and personal, you saw how he battled.

I’m still glad I spent some time with him.

It was a great honour for me. It was an experience I will treasure all my life.

The night I met the great Muhammad Ali