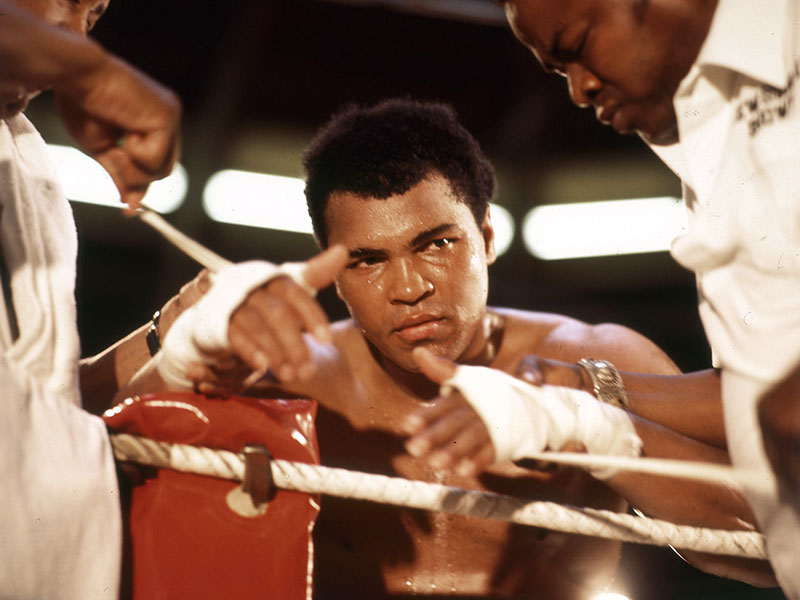 He was the greatest. Photo: Getty

Boxing legend Muhammad Ali, arguably the greatest athlete of all time, has died of a respiratory illness at a hospital in the US town of Phoenix at the age of 74.

Ali, known as much for his cocky remarks and controversial stance against conscription as his stellar heavyweight boxing career, was hospitalised this week following reports of a respiratory ailment.

It was reported early Saturday morning, Australian time, that Ali had been placed on life support and that his family, including daughters Laila, Hana and Maryum, had rushed to his bedside in Phoenix.

A source who had spoken to Ali’s wife Lonnie said Ali’s state of health had become “extraordinarily grave” overnight.

“Funeral arrangements are already being made,” the source, who spoke on the condition of anonymity, claimed.

Bob Gunnell, Ali’s spokesman, heightened concerns for the former world heavyweight champion’s health when, in the lead-up to the passing, he refused to comment on Ali’s condition.

For the past three decades he battled Parkinson’s disease, while in December 2014 he was admitted to hospital with suspected pneumonia.

He was later diagnosed with a severe urinary tract infection, and received further treatment in January 2015.

Ali had kept a low profile as of late, making his last public appearance in April at the ‘Celebrity Fight Night’ gala in his home town in Arizona.

Ali, born in Louisville, Kentucky, as Cassius Marcellus Clay Jr, changed his name in 1964 after his conversion to Islam.

At the height of his career, Ali was known for his dancing feet and quick fists and his ability, as he put it, to float like a butterfly and sting like a bee.

Nicknamed The Greatest, he retired from boxing in 1981 with a 56-5 record. Ali’s diagnosis of Parkinson’s came about three years after he retired.

He won the world heavyweight title in 1964, then twice more in 1974 and 1978 after a long absence from the sport due to his refusal to take part in the Vietnam War after being conscripted into the armed forces in 1967.

His rivalry with George Foreman, also a heavyweight champion, produced a number of incredible fights, most notably the “Rumble in the Jungle” held in Kinshasa, Zaire, in front of about 60,000 fans.

Ali won the clash after tiring his opponent, moving around the ring and absorbing punches with an impressive display of endurance.

His rivalry with ‘Smokin’Joe Frasier was equally fierce.

The pair’s first meeting, which was held soon after Ali’s absence from the sport was billed as the “Fight of the Century”.

Ali lost the fight – and his perfect record – by unanimous decision that night, but had his revenge in the rematch called the “Thriller in Manilla”.

Australian boxer Danny Green paid tribute to Ali, who he described as “the legend”.

“Thanks to this champion, boxers like myself were able to make a living from the sport we love,” he wrote on Facebook.

“He was responsible for bringing the great sport of boxing to the masses. He captured the imagination of everyone.”

“No Viet Cong ever called me nigger”

One of the many things that made Ali’s career so sensational, was his forced absence from the sport during his prime, from age 25 to 28.

He was convicted by a US court for refusing to fight in the Vietnam War after being conscripted in 1967.He was sentenced to five years in prison.

Asked why he refused to fight for his country, Ali famously said: “No Viet Cong ever called me nigger.”

He was not sent to jail while he was appealed the case.

In 1970 his boxing licence was reinstated and he immediately returned to the ring.

In 1971 the US Supreme Court overturned Ali’s conviction with an 8-0 verdict. There was one abstention.

During his ban from boxing, Ali became a political activist, speaking against the Vietnam War and in favour of racial equality at universities around the USA.

“If you even dream of beating me you’d better wake up and apologise”.

“I have been so great in boxing they had to create an image like Rocky, a white image on the screen, to counteract my image in the ring. America has to have its white images, no matter where it gets them. Jesus, Wonder Woman, Tarzan and Rocky”.

“I done wrestled with an alligator, I done tussled with a whale; handcuffed lightning, thrown thunder in jail; only last week, I murdered a rock, injured a stone, hospitalised a brick; I’m so mean I make medicine sick”.

“Only a man who knows what it is like to be defeated can reach down to the bottom of his soul and come up with the extra ounce of power it takes to win when the match is even”.

“Cassius Clay is a name that white people gave to my slave master. Now that I am free, that I don’t belong anymore to anyone, that I’m not a slave anymore, I gave back their white name, and I chose a beautiful African one”.