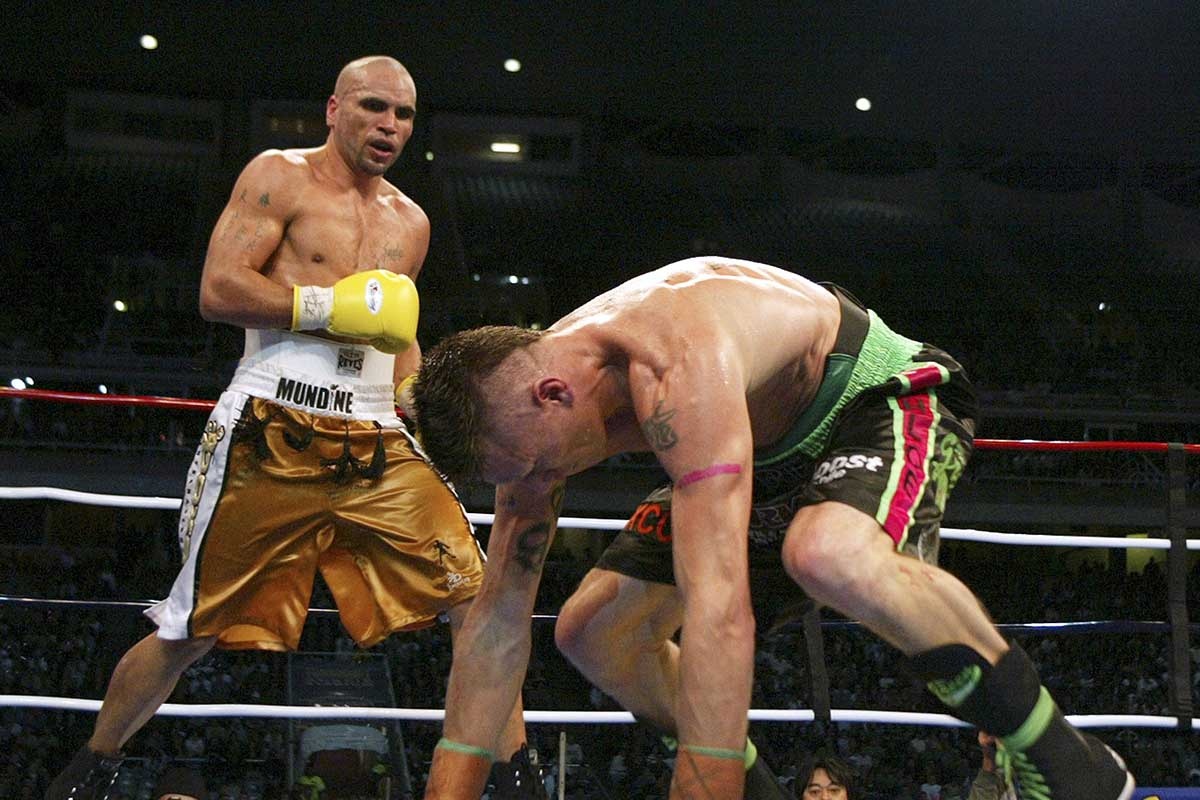 Anthony Mundine has laid out weight and purse stipulations for a mooted boxing rematch with arch-rival Danny Green to go ahead.

Both boxers will be in action in Melbourne in coming weeks.

Mundine, 40, the No.4 contender for the WBC super welterweight title, will defend that organisation’s Silver belt on November 11 against American Charles Hatley, rated 13th.

• Anthony Mundine: when the music’s over
• Why I’m breaking up with boxing
• Davey Browne dies of brain injury

Talk of a sequel to their May 2006 bout in Sydney won by Mundine has grown since Green ended the 33-month hiatus in his career in August this year.

Since their first contest Green has jumped two divisions to cruiserweight and Mundine has dropped down two to super welterweight.

Mundine said on Friday probably the only fight he would place ahead of a second bout with Green would be one against a massive name like Canelo Alvarez, Miguel Cotto or Gennady Golovkin.

“I’m on the cusp of getting big, major fights especially if I can make a statement in this (Hatley) one,” Mundine said.

“Depending what happens after this fight, money talks (on a fight with Green).

“Obviously there’s got to be something worked out with both parties coming to common ground on weight.

“For the right carrot, the right deal, 60-40 (purse split) in my favour, It’s more than likely I would fight him at that weight.

Green weighed in six kilos above the light heavyweight limit for his cruiserweight comeback fight.

Mundine, who said he normally walks around at about 75 to 76 kilos between fights, has to get down to 69.85 to fight at super welterweight.

He is wary of Green stacking on weight after the eve-of-fight weigh in and coming into the ring much heavier than him and would want another weigh in on the day of the contest.

“There would have to be a stipulation in there that he can’t be 10 kilograms more than me on the night of the fight,” Mundine said.

Green has previously asserted the battle to make the super middleweight limit for his first fight with Mundine drained him of energy.

“He’s talking about the weight factor, but his whole career at that time was at super middleweight,” Mundine said.

“He fought championships at super middleweight and then all of a sudden when I whupped his ass, there’s a weight problem.

“I didn’t know how to manage my weight and I didn’t eat the right foods and diet properly, I was struggling to make weight.”

Mundine has been nursing niggly elbow and hip issues which have reduced his amount of sparring preparation, but he insisted he will be fully fit for the Hatley fight.

“Nothing major, but it’s niggling enough to be irritating,” Mundine said.

“There’s almost a month to go, so I’ll start ramping up training in the next two, three weeks.”

Mundine willing to come up in weight for Green