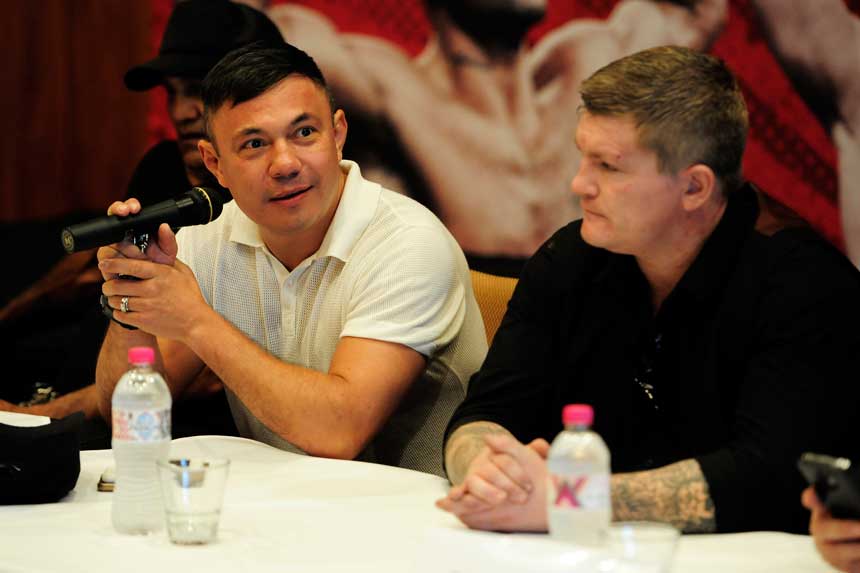 Reunited with famous foe Ricky Hatton after nine years, Kostya Tszyu wants to put boxing behind him, but says it’s an impossible task.

Tszyu and Hatton hugged and mugged for the cameras in Sydney on Saturday in their first meeting since the Briton dethroned the Russian-born Australian in an epic light welterweight world title bout in Manchester in 2005.

The mutual respect they showed in their gracious post-fight interviews was evident again.

“As tough as that fight was, once you’ve gone through that together, there’s a bond that will never die.”

Tszyu hasn’t fought since that bout and has never officially retired, but on Saturday made it clear he had no plans to return to the ring.

“I have a very good agreement with my mum, who never wants to see me in the ring, that’s why I’m not there,” Tszyu said.

“I enjoy myself. I’ve got other things in my life, I’m very busy.”

Now living in Moscow, Tszyu is a businessman with an interest in the water industry.

He has no major involvement in boxing, though he still retains his gym in Sydney and his son Nikita is a promising amateur fighter.

“I’m trying to walk away from boxing, but I think I’m stuck there forever.

“It’s impossible. I started training at nine. That means 36 years (he has been involved in boxing).

“I know I’m just kidding myself. It’s not going to work, I’m always going to be involved with boxing.”

Tszyu was one of the first fighters from eastern Europe to enjoy success as a professional and isn’t surprised the region is now producing several dominant champions and hard-punching fighters.

“Technique, they learn how to hit properly,” Tszyu said.

Hatton who promotes hard-hitting Belarus light middleweight Sergey Rabchenko, who fights Anthony Mundine in Melbourne on November 12, is another unabashed admirer of the wave of eatsern European boxers.

“I don’t know what they put in the cornfakes or the milk in that part of the world, but they always seem to be naturally very very strong, hard people,” Hatton said.