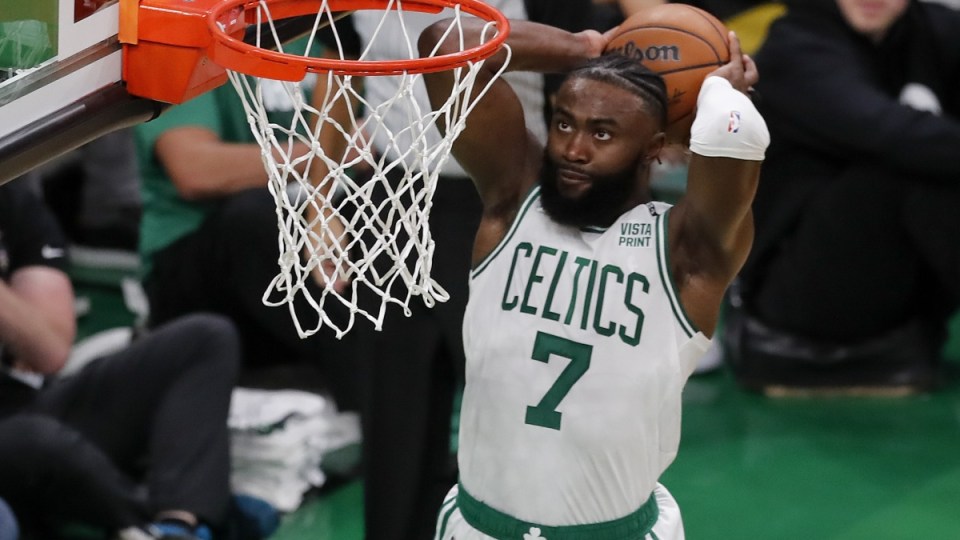 The Boston Celtics have moved a step closer to the NBA championship with a 116-100 win over Golden State Warriors to grab a 2-1 lead in the NBA Finals.

Jaylen Brown scored 17 of his 27 points in the first quarter and Jayson Tatum finished with 26 points to lift the hosts in Game 3 on Wednesday.

The fourth game in the best-of-seven series is set for Friday in Boston.

Tatum had nine assists and Brown added five to go along with nine rebounds.

Boston’s Marcus Smart finished with 24 points after mustering just two in the Celtics’ 107-88 loss in Game 2 on Sunday.

Al Horford collected 11 points, eight rebounds and six assists for Boston, who shot 48.3 per cent from the floor to improve to 7-0 after a loss in the playoffs.

“Game 2, they brought the heat to us,” Smart said. “For us, that left a bad taste in our mouth because what we hang our hat on is effort on the defensive end and being a physical team.

“It definitely woke us up a little bit.”

Tatum said the fact the Celtics didn’t hang their heads after the Warriors’ third-quarter flourish is something they didn’t always do in the regular season.

“I think that’s when we are at our best when we respond to tough situations. We respond to teams going on runs and things like that,” he said. “I think we did that several times tonight.”

Curry remained in the game with 4:07 to play in the fourth quarter despite appearing to injure his left leg while scrambling for a loose ball.

Despite Curry’s noticeable limp after the play with Horford, Warriors coach Steve Kerr said it was not why he pulled him from the game in the closing minutes.

“The injury didn’t force him out of the game, but I took him out down 14 with two minutes left because we weren’t going to catch up,” Kerr said. “We will know more tomorrow.”

Klay Thompson had 25 points and Andrew Wiggins added 18 for the Warriors, who benefited from their third straight strong third quarter in the series to trim their deficit to four points entering the fourth.

Tatum made two foul shots to start the fourth quarter and steer Boston to a 107-96 lead with 5:53 to play.

Golden State, who outscored Boston by a 73-38 margin in the third quarter of Games 1 and 2, hoped for similar domination on Wednesday after entering the period with a 12-point deficit.

Curry drained back-to-back 3-pointers and made two more to give the Warriors an 83-82 lead before Smart answered from beyond the arc on the next possession.

Brown responded from a sluggish 5-for-17 shooting performance on Sunday with an aggressive start on Wednesday.

He made six of nine shots, including three of four from 3-point range in the first quarter.