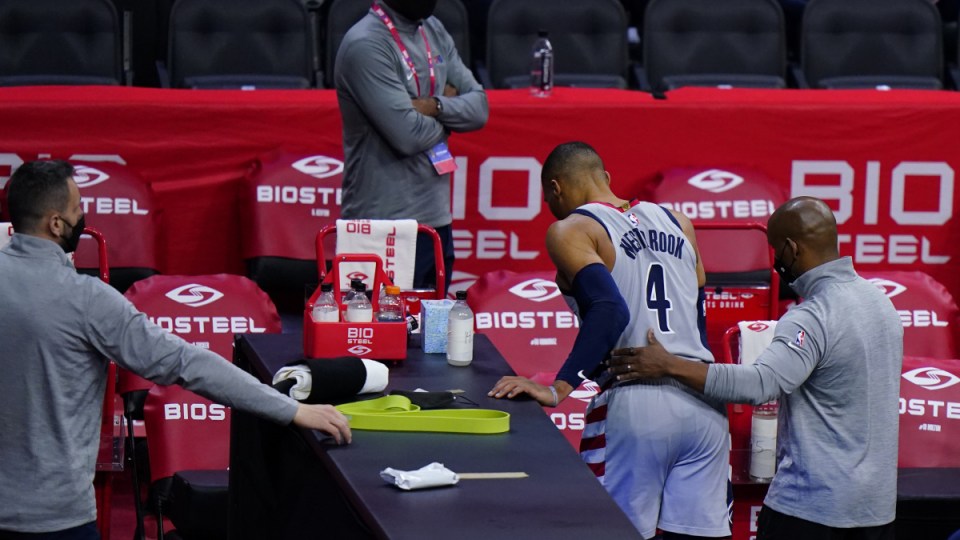 Russell Westbrook is helped off the court, just before a 'fan' adds insult to injury. Photo: AP

NBA superstar Russell Westrbook was left incensed after a fan poured popcorn on his head as he left the court with an injury during a play-off game.

The Washington Wizards point guard had to be restrained as he limped off after rolling his right ankle against the Philadelphia 76ers.

Westbrook exited the game with more than 10 minutes remaining in the fourth quarter after stepping on the foot of 76ers guard Furkan Korkmaz.

Popcorn was dumped on Westbrook’s head as he went through the tunnel and he had to be held back by the team and Wells Fargo Centre security.

“I wouldn’t come up to me on the street and throw popcorn on my head, because you know what happens,” Westbrook said after the game. “In these arenas, you gotta start protecting the players. We’ll see what the NBA does.”

The Sixers responded with a statement after the game.

“This was classless, unacceptable behaviour, and we’re not going to tolerate it at Wells Fargo Centre,” read a statement from Sixers president of business operations Valerie Camillo.

“We’re proud to have the most passionate fans in the country … but this type of behaviour has no place in our arena.”

“By the way WE AS THE PLAYERS wanna see who threw that popcorn on Russ while he was leaving the game tonight with an injury!! There’s cameras all over arenas so there’s no excuse!”

The fan was eventually ejected from the arena.

The end of the video appears to show other fans sitting just above the entry to the tunnel pointing up to identify the person who threw the popcorn.