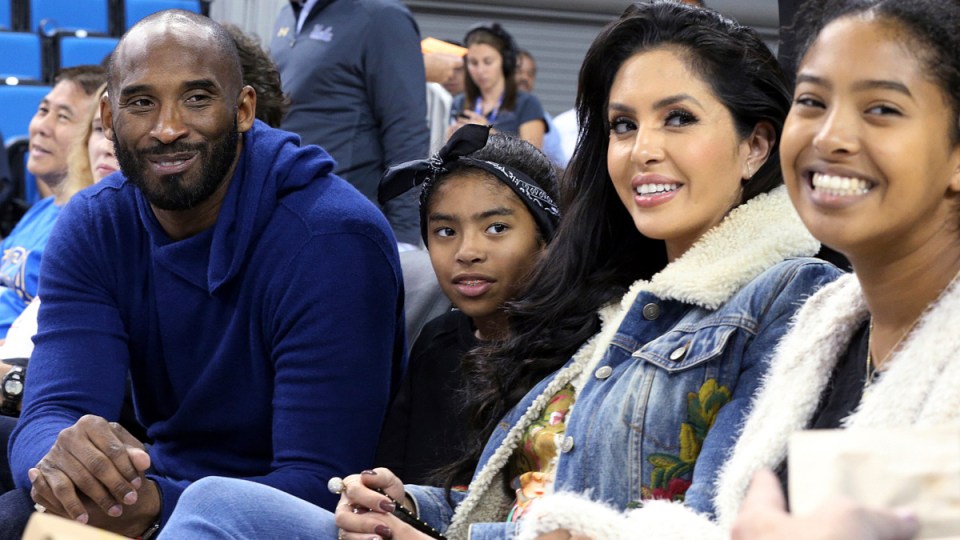 Kobe Byrant in 2019 with wife Vanessa and daughter Gianna, who died with her dad when their helicopter fell from the sky. Photo: Getty

It was a moment of pride tinged with tears as Vanessa Bryant, widow of basketball superstar Kobe Bryant, stood at the podium as the man she loved was posthumously inducted into the Naismith Memorial Basketball of Fame.

And laced with humour, too, as she noted that she had always avoided praising the former Los Angeles Lakers star in public.

She regularly heard thousands of fans and other people heaping praise on the five-time NBA champion, 18-time NBA All-Star and 2007-08 MVP.

“Someone had to bring him back to reality,” Vanessa Bryant said.

“Right now, I’m sure he’s laughing in heaven because I’m about to praise him in public for his accomplishments on one of the most public stages.”

Kobe Bryant died at the age of 41 on January 26, 2020, in a Southern California helicopter crash that also claimed the life of 13-year-old daughter Gianna and seven others.

Ms Bryant’s speech was the highlight of the ceremony in Connecticut, in which Kobe Bryant was one of the nine members of the 2020 Hall of Fame class.

“You’re a true champ. You’re not just an MVP, you are an all-time great.

“I’m so proud of you. I love you forever and always, Kobe Bean Bryant.”

The 2021 Hall of Fame class, with Australian Opals superstar Lauren Jackson among the nominees for induction, is slated to be announced on Sunday.

NBA legends Tim Duncan and Kevin Garnett were among the other inductees in the 2020 class.

Among those inducted on Saturday were NBA player and coach Rudy Tomjanovich and star women’s player Tamika Catchings.

The induction ceremony was delayed a year due to the coronavirus pandemic.

Kobe Bryant was presented by Michael Jordan, a player he looked up to as a child.

Vanessa Bryant said Kobe was greatly looking forward to the induction ceremony with the award basically being the topper to his stellar 20-year NBA career.

“Kobe’s personal stats speak for themselves, Kobe was on a different level,” Vanessa Bryant said.

“He never took shortcuts when it came to basketball. He gave this game his all.”

Duncan, a five-time NBA champion who spent his entire 19-year career with the San Antonio Spurs, was presented by former Spurs teammate David Robinson, the 2009 Hall of Fame inductee who was the face of the franchise when Duncan was selected No.1 overall in the 1997 draft.

Garnett spent most of his 21-year career with either the Minnesota Timberwolves and Boston Celtics.

The 15-time All-Star, who won a title with the Celtics in 2008, was known for high-level intensity that never took a calming break.