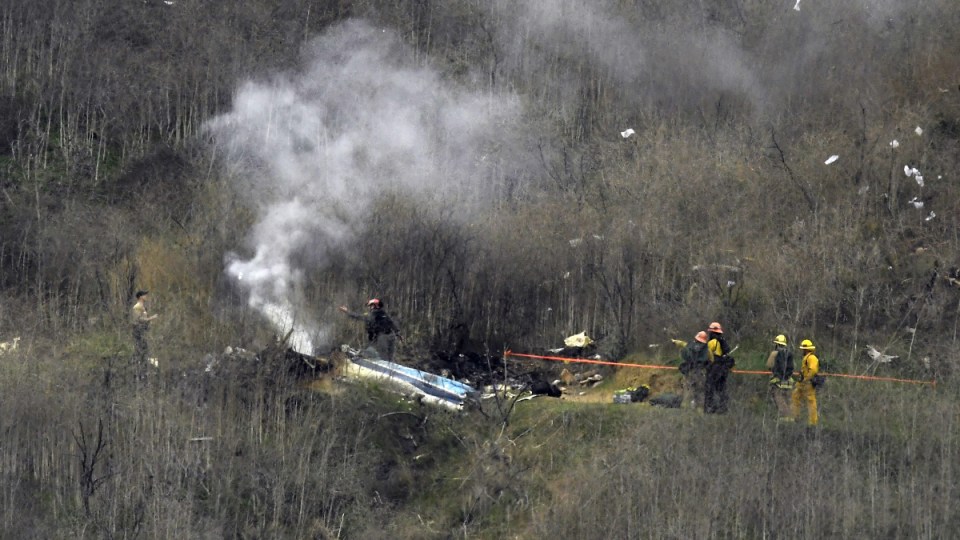 A team of investigators from the National Transportation Safety Bureau and the Federal Aviation Authority are on scene as the coroner's office works to recover the nine passengers and pilot. Photo: AAP

Los Angeles police have confirmed there were nine people on board a helicopter which crashed in Calabasas California, killing retired basketball legend Kobe Bryant, 41, and one of his daughters.

Sergeant Benjamin told reporters on Monday at 9.30am (AEDT) there were no survivors on board the Sikorsky S-76 after it crashed in steep terrain about 10am local time on Sunday about 65 kilometres northwest of downtown Los Angeles on the hillside at Las Virgenes Road and Willow Glen Street.

“We have a manifest to indicate there were nine people on board of the aircraft. The pilot plus eight individuals,” he said.

The helicopter was believed to be en route to a basketball game in Thousand Oaks carrying Bryant and his daughter Gianna (Gigi), 13.

A NBA insider reported other passengers included another parent and her daughter.

Investigators are trying to determine the cause of the fatal crash. There was extensive fog in the Los Angeles area on Sunday morning.

As news broke of the tragedy, sports stars from around the globe have begun paying tribute to retired basketball legend Kobe Bryant who was killed along with eight others in a helicopter crash in Calabasas California.

Bryant, who was married with four daughters, was an 18-time All-Star who won five NBA championships and became one of the greatest players of his generation during a 20-year career spent entirely with the Los Angeles Lakers.

Hundreds of people have begun gathering outside the home of the LA Lakers, the STAPLES Centre, leaving tributes and flowers, and where, in two hours’ time, the 62nd Grammy Awards are to be held.

Retired NBA star Kobe Bryant, a basketball prodigy who went on to win five championships with the Los Angeles Lakers, died in a helicopter crash in California https://t.co/9lxGzVSHLs pic.twitter.com/7oIjDfzST4

The National Basketball Players Association says it is stunned and devastated by the news of Bryant’s death.

“Words cannot express his impact on our players, the NBA and the game of basketball,” it tweeted.

“This is a monumental loss for the entire basketball community and our hearts are quite simply broken.”

We are devastated to learn of the passing of Kobe Bryant and his daughter Gianna. Our thoughts go out to all the families involved in the tragedy and everyone in the Lakers, Los Angeles and NBA communities. pic.twitter.com/NDcCDP0GtM

Kobe was so much more than an athlete, he was a family man. That was what we had most in common. I would hug his children like they were my own and he would embrace my kids like they were his. His baby girl Gigi was born on the same day as my youngest daughter Me’Arah. pic.twitter.com/BHBPN5Wq8V

Laker Nation, the game of basketball & our city, will never be the same without Kobe. Cookie & I are praying for Vanessa, his beautiful daughters Natalia, Bianka & Capri, as well as his parents Joe & Pam & his sisters. We will always be here for the Bryant family. pic.twitter.com/WWxmtEAJqZ

Laker legend Kareem Abdul-Jabbar tweeted: “Most people will remember Kobe as the magnificent athlete who inspired a whole generation of basketball players. But I will always remember him as a man who was much more than an athlete.”

Former President Barack Obama, who hosted Bryant and the Lakers at the White House following their 2010 championship, wrote: “Kobe was a legend on the court and just getting started in what would have been just as meaningful a second act”

“To lose Gianna is even more heartbreaking to us as parents. Michelle and I send love and prayers to Vanessa and the entire Bryant family on an unthinkable day.”

Philadelphia 76er Joel Embiid tweeted: “Man I don’t even know where to start???? I started playing ball because of KOBE after watching the 2010 finals. I had never watched ball before that and that finals was the turning point of my life. I WANTED TO BE LIKE KOBE. I’m so FREAKING SAD right now!!!! RIP LEGEND.”

Continuing to move the game forward @KingJames. Much respect my brother 💪🏾 #33644

Bryant’s own last tweet was praising LeBron James, who had just surpassed him on the NBA’s all-time points scoring list. James is now the third behind Kareem Abdul Jabar and Karl Malone.

“Continuing to move the game forward @KingJames. Much respect my brother #33644,” he tweeted on Saturday.

After James passed Bryant on Saturday local time, he remembered listening to Bryant when the superstar came to speak at a childhood basketball camp.

“I remember one thing he said: If you want to be great at it, or want to be one of the greats, you’ve got to put the work in,” James said. “There’s no substitution for work.”

James later teamed up with Bryant on the 2008 US Olympic team in Beijing.

“You backed off of him, he could shoot the 3. You body him up a little bit, he could go around you. He could shoot from mid-range. He could post. He could make free throws. … He was just immortal offensively because of his skill set and his work ethic,” he said.

In 2017, Bryant collaborated with animator Glen Keane on a short film entitled Dear Basketball, which won an Oscar for the Best Animated Short in 2018.

Voiced by Bryant, the five-minute film speaks deeply and lovingly about the sport that he dominated for many years.

Online news site TMZ says wife Vanessa Bryant was not among those on board.

“There was a debris field and steep terrain with a quarter acre brush fire that was occurring at the time. Our firefighters hiked into
the site with medical equipment and hose lines to extinguish the fire as it included the brush fire debris from the helicopter.

Unfortunately all the survivors were determined to have been perished. Firefighters and hand crews worked to extinguish the fire while carefully preserving the incident for investigation.

We are following media reports the Kobe Bryant was among those killed in a crash of an S-76 helicopter near Calabasas, CA this morning. Initial data indicate N72EX is the aircraft involved. Data for N72EX is available at https://t.co/47EEtYA3uP pic.twitter.com/XZSFafHgmU

Federal Aviation Administration spokesman Allen Kenitzer said it was a Sikorsky S-76 and it was not known what caused the crash.

It’s reported that eyewitnesses heard the helicopter’s engine spluttering before it went down and caught fire.

Bryant was known to travel by private helicopter dating back to when he played for the LA Lakers.

He was a basketball superstar for his entire adult life. He entered the NBA draft straight out of high school in 1996 after a childhood spent partly in Italy, where his father, former NBA player Joe “Jellybean” Bryant, played professionally.

The Lakers acquired the 17-year-old Bryant in a trade shortly after Charlotte drafted him, and he immediately became one of the most exciting and intriguing players in the sport alongside O’Neal, who had signed with the Lakers as a free agent.

Bryant won the Slam Dunk Contest as an upstart rookie, and the Lakers gradually grew into a team that won three consecutive championships.

He was the league MVP in 2008 and a two-time NBA scoring champion, and he earned 12 selections to the NBA’s All-Defensive teams.

He teamed with Shaquille O’Neal in a combustible partnership to lead the Lakers to NBA titles in 2000, 2001 and 2002.