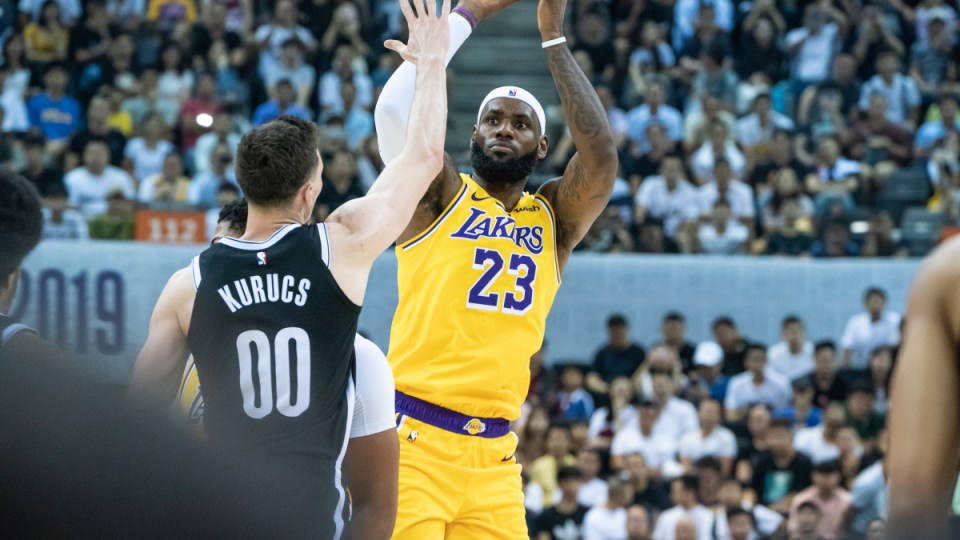 Protesters in Hong Kong have trampled on LeBron James jerseys in response to the sports icon's comments on the NBA-China tweet controversy. Photo: Getty

LeBron James’ previously untouchable standing among basketball fans in Hong Kong has taken a battering after comments the NBA star made about free speech.

James found himself front and centre in fallout between the NBA and China in the wake of his observations about a league executive who started the dispute with what the Los Angeles Lakers superstar derided as a “misinformed” tweet.

Politicians, human rights groups and fans on social media have blasted  James, who is rarely short of an opinion. Many called into question the true motivation of his comments.

James spoke out Monday, his seven-minute session with reporters putting him squarely in the centre of the ongoing international schism.

Houston general manager Daryl Morey was “not really educated on the situation,” James asserted, when he sent out that since-deleted October 4 tweet showing support for Hong Kong’s pro-democracy protests.

On Tuesday, James acknowledged the criticism and said he expected that it would be coming.

“Obviously, it’s a tough situation that we’re all in right now, … I think when an issue comes up, if you feel passionate about it or you feel like it’s something you want to talk about, then so be it,” James said.

“I also don’t think that every issue should be everybody’s problem as well.”

Monday’s comments unleashed a backlash against James, who has often spoken out on social and political matters, with some expressing dismay that this time he seemed to be more concerned about protecting his own brand and financial interests in China, where he enjoys enormous popularity.

“I’ve been to China probably 15 to 20 times … to have this beautiful game that we all love to be able to bring people together in the most positive way.”

That is not the case right now.

Protesters in Hong Kong on Tuesday trampled on James’s jerseys, burning one, and threw basketballs at a photo of the four-time NBA MVP – a global sports icon whose image has taken a clear hit.

Among James’ comments Monday night, his first publicly shared thoughts on the matter: “So many people could have been harmed, not only financially but emotionally, physically and spiritually” by Morey’s tweet.

That fanned the fallout fire, including from US lawmakers who said they believed the NBA’s primary goal had been to protect the league’s massive financial interest when it comes to its relationship with China instead of more vigorously defending Morey’s right to free speech.