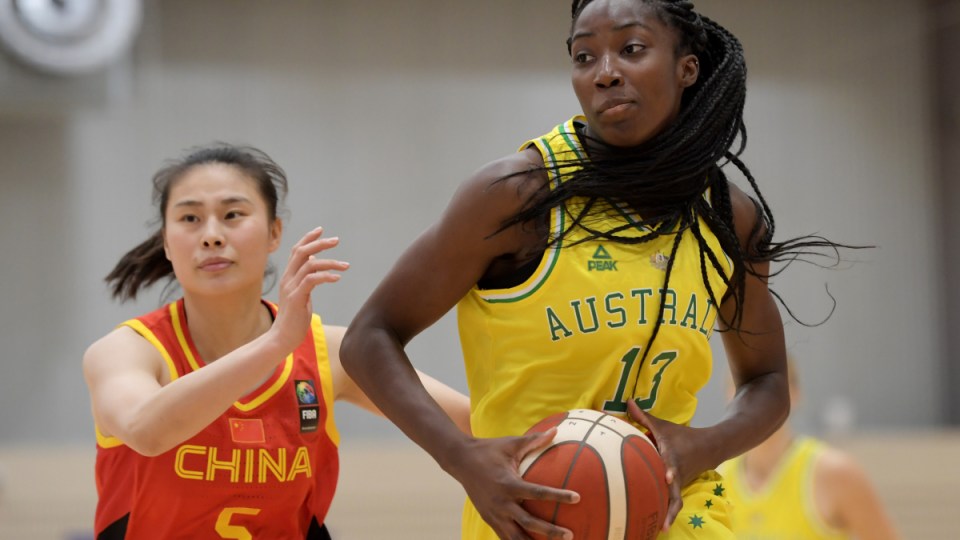 Australia has thrashed China 98-63 in a women’s international basketball friendly on Thursday as Ezi Magbegor starred in Canberra.

The Opals dominated from start to finish and put the nail in the coffin with an 18-point run in the third quarter led by Stephanie Talbot.

The match was a tune-up for the Asian Cup, with Australia’s campaign kicking off against the Philippines in Bangalore, India, on Tuesday.

The Opals were without stars Liz Cambage and Marianna Tolo but still justified their world No.3 ranking with a clinical performance at the AIS Arena.

The @ChemistWhouse Opals will head to India in winning form after an impressive effort on both sides of the floor in Canberra tonight!

None of the Chinese players hit double digits on the scoreboard, while Magbegor (20), Rebecca Allen (15) and US-based Talbot (11) led the Opals attack.

“Adapting to the group is easy. I’ve played (coach) Sandy’s system a fair bit over the past few years so coming back in is natural to me,” Talbot said.

“We have a culture where any time we come together, it doesn’t take long for us to mesh together.”

Australian coach Sandy Brondello singled out Magbegor after she bounced back from some sub-par performances.

“To be quite honest she wasn’t too good but we know what she’s capable of. We put her in positions tonight which we knew would help her be aggressive,” Brondello said.

“She’s a great player, so that was a great performance from her and that’s what we need. They’re all different, they’re all versatile but Ezi gives us something different.”

Brondello said only a gold medal at the Asian Cup would be a pass mark before the 2020 Tokyo Olympics.

“Definitely. We have high expectations for ourselves,” Brondello said.

“Everything is important now. We’re leading into the Olympics with all of these qualifications. If we finish No.1, it gives us a better ranking and a better group for the November qualifier.

“If you finish No.1 there, you have a No.1 seed going into a pre-Olympics. Last time there was a pre-Olympics, I was actually a part of that team and we missed out on going to Barcelona (1992). I know what it feels like.

“These girls are very professional. I don’t have to push them too much, because they push themselves.”

Ezi does it: Magbegor stars as Opals thrash China in Canberra in Asian Cup warm-up