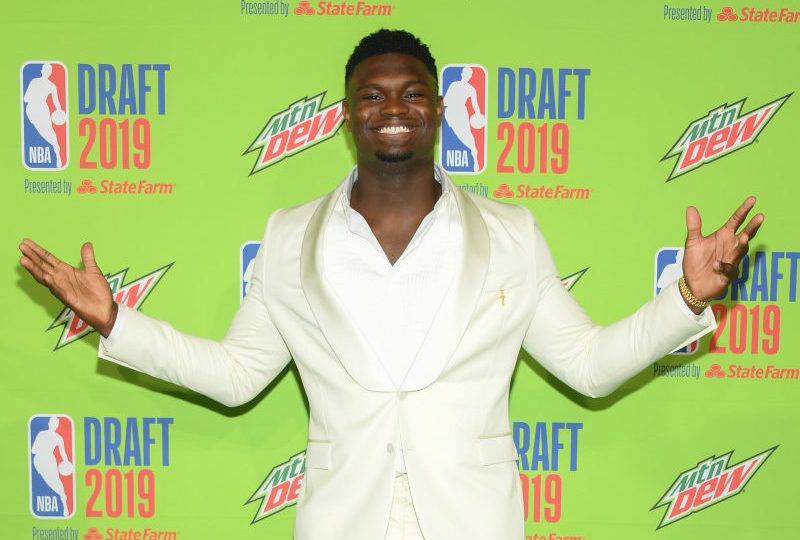 I have a couple of sons who are NBA crazy, so despite my complete and total indifference to sport of any type, I am privy to NBA Draft day. And I am now obsessed, but for pure fashion reasons.

If you want to see some of the best looking young athletes on the planet in the freshest suits, then this is your Met Gala.

There has always been a tradition for the ballers to dress up in seemingly self designed or customised threads, in over-the-top colours and fabrics – and, during the 90’s and early 2000’s, suits that were massively, and almost comically, oversized.

Fast forward to today and these young men all look like they’ve stepped off the men’s runways in Milan. Given they all hover between 6 ft. and 7 foot and have not one ounce of body fat, they have the perfect proportion for a finely fitted suit, unlike their more brawny football counterparts who often look like they are going to bust out of their suits, Incredible Hulk-style.

The suits are jaw dropping, in a myriad of colours like hot pink, red, bright blue and all the classic Easter egg pastels. The jackets are all tailored to fit like a glove, the trousers tapered and worn cropped above the ankle, such a great look on their long pipe-cleaner legs. 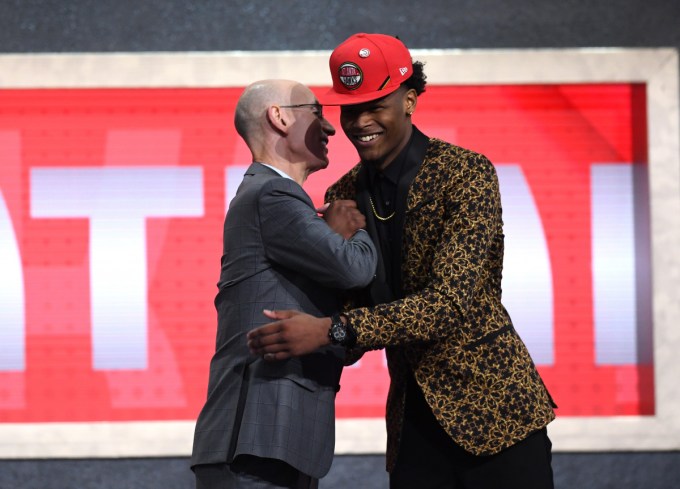 Cam Reddish poses with NBA Commissioner Adam Silver after being drafted with the tenth overall pick by the Atlanta Hawks. Photo: Getty 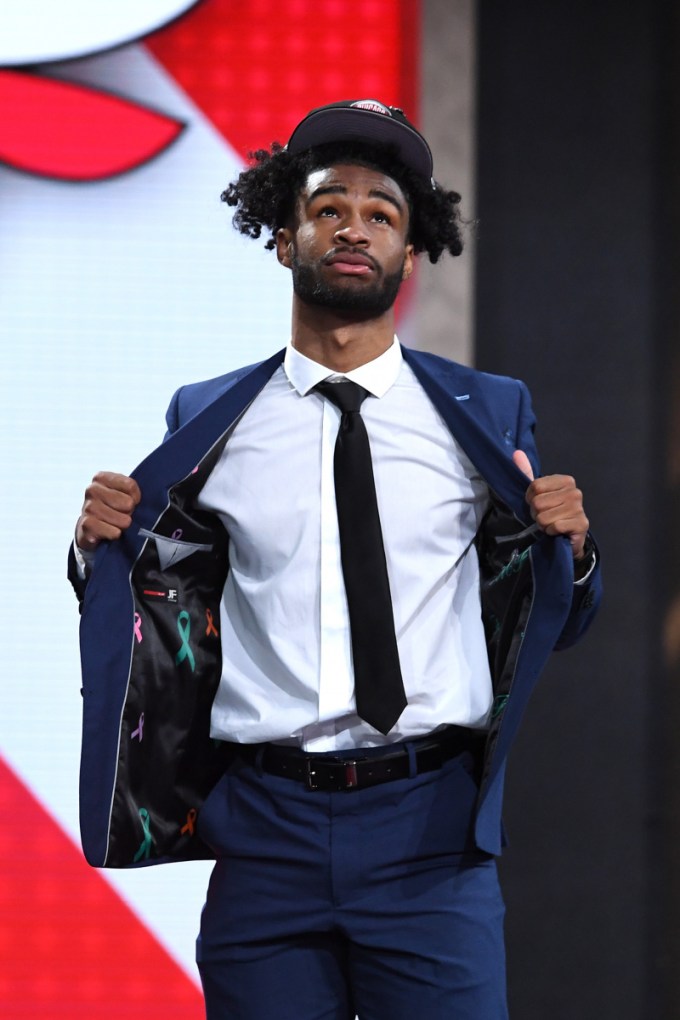 Coby White reacts after being drafted with the seventh overall pick by the Chicago Bulls. Photo: Getty 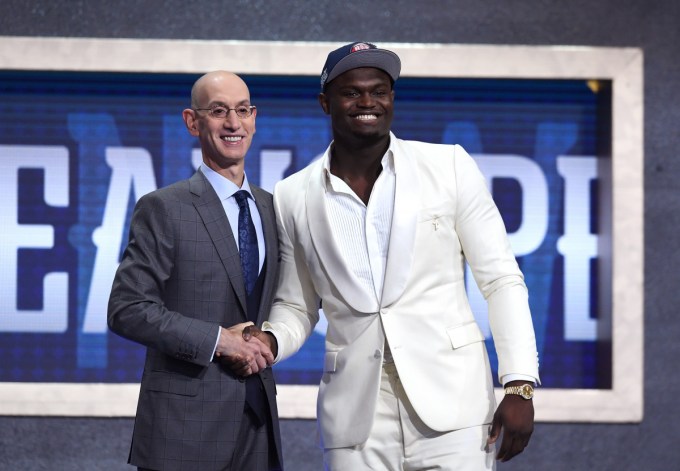 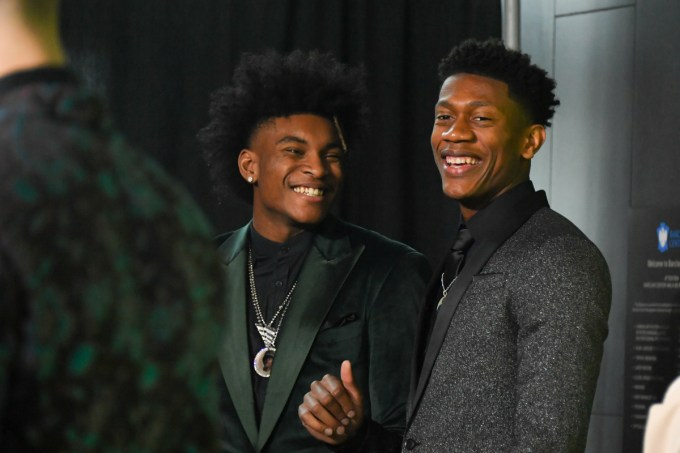 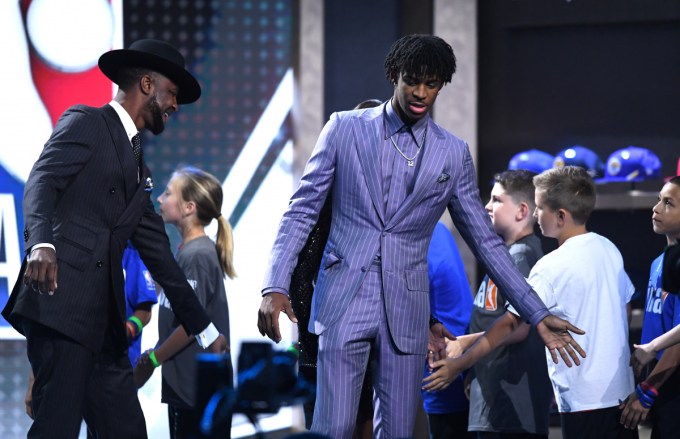 Ja Morant is introduced during the draft. Getty 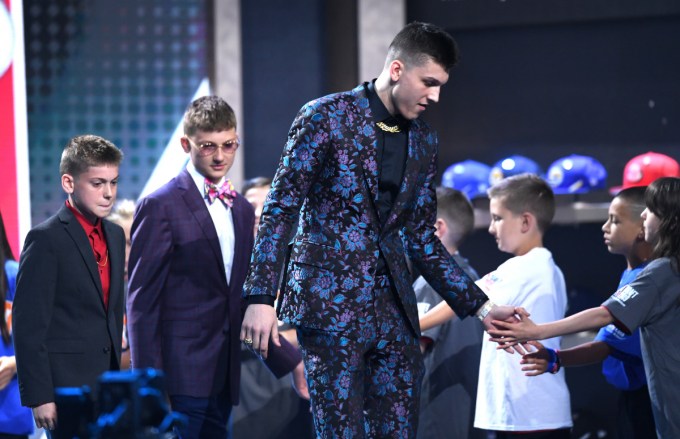 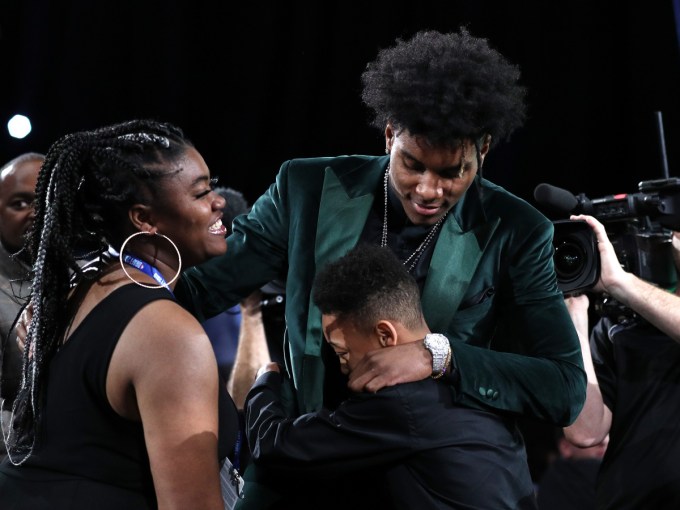 Kevin Porter Jr. hugs his family after being drafted with the 30th overall pick by the Milwaukee Bucks. Photo: Getty 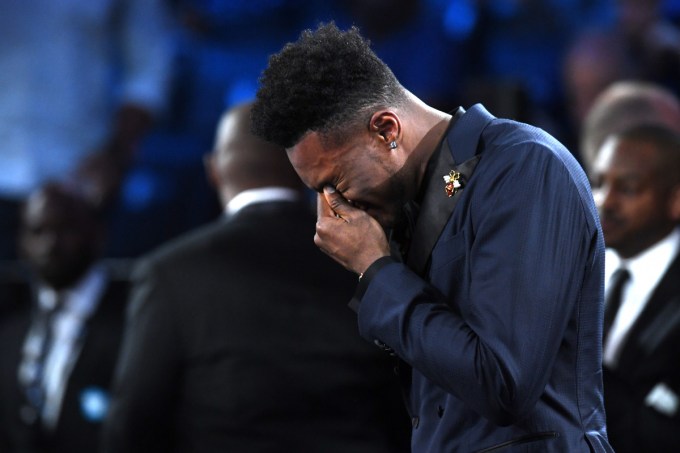 Bruno Fernando reacts after being drafted with the 34th overall pick by the Philadelphia 76ers. Getty

The look is worn sockless, with loafers or slippers that are sometimes jewel encrusted, along with some the best haircuts you’ll ever see.

The teens all find a way of weaving some sort of homage into their lining of their jackets: whether it be a loved one, their country of origin, or their jersey number, their blazers tell the story of their journey to this all-important night.

I also watch for the pure emotionality of the event – these kids are elite athletes who have worked long and hard to excel at their craft, and are on the verge of hitting the big time, both financially and professionally.

Even better, as their names are called, they appear on stage with their family members, mothers, fathers, sisters, and brothers.

I love watching the mothers who are so nervous, and so proud, holding the hand of the son they have raised to greatness. They, too, are dressed to the nines, hair done, best dress on.

This is where I normally turn to my sons, and say something along the lines of: ‘Gee isn’t she lucky, her son is just about to score a US$100 million Nike deal and he’s going to buy her a house and I’m here taking your dirty plates into the kitchen, woo hoo, why didn’t you ever get good at anything?’

But really, the NBA draft is a visual feast, like the cast of Peaky Blinders were crossed with Miami Vice. The boys wear pocket watches and necklaces and pochettes, and vests; it’s a sartorial benchmark for any man.

The number one pick, Zion Williamson, was resplendent in a cream suit with a pintucked white shirt accompanied by his proud parents and his excited little brother wearing a tiny, perfect suit.

The perfect pairing of fashion flair and outstanding talent. Game over.

Kirstie Clements: Want a style lesson? The NBA’s rising stars have it all