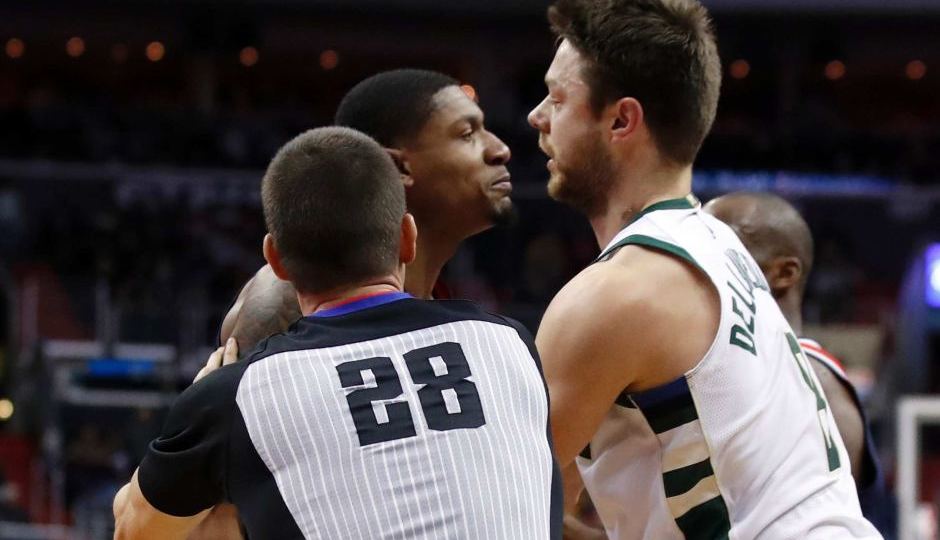 Beal and Dellavedova had to be separated by officials and players after the crash tackle. Photo: AP

Matthew Dellavedova has been labelled a “dirty player” by Washington superstar John Wall after a contentious incident that saw the Australian ejected from the Milwaukee Bucks’ game against the Wizards.

Dellavedova, who has built his NBA career on physicality and hustle, was thrown out of Sunday’s (AEDT) match for wiping out Bradley Beal with a reckless arm over the shoulder as the Wizard made a move for the basket.

The foul caused a brief scuffle between the two teams, before the referee threw Dellavedova out of the game.

Dellavedova’s Bucks would go on to win 110-103, but the Wizards’ rage continued into the post-match when Wall, an All Star point guard, let fly on the Aussie.

“Whatever their team can say and other people can vouch for him, to me, I always thought he was a dirty player,” Wall said.

“There’s a difference between making a play on the ball and wrapping your arms around somebody’s neck.

“I give him credit, he plays hard, I take nothing away from him for that, but I just feel like he’s a dirty player.”

Dellavedova stood up for himself after the match, saying Beal slipped before the contact was made.

“Wall threw the ball up to Beal and I tried to run him off the three. He decides to drive it, so I tried to hold him up and he slipped because he went down,” Dellavedova said.

“I was just trying to hold him to prevent him from getting the and-one, and then he just went to ground.”

Dellavedova also said he was surprised the referee ejected him.

“I wasn’t expecting that,” he said.

“I thought it was a foul, or maybe a flagrant one, but I definitely wasn’t expecting that. But that’s what they called, it is what it is.”