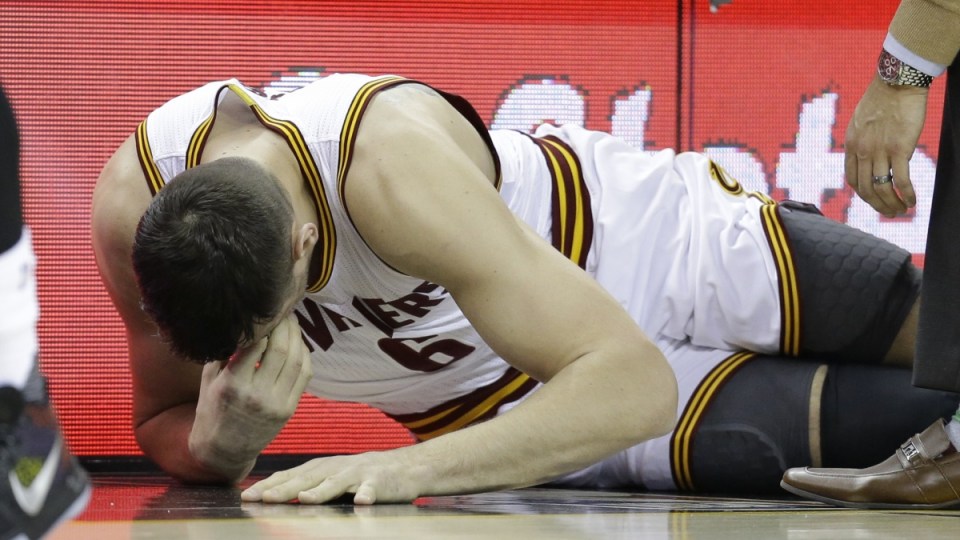 Bogut grabs his face in pain after his devastating injury. Photo: AAP

Andrew Bogut’s debut with LeBron James and his NBA defending champions Cleveland has ended disastrously with a broken leg after just 58 seconds on the court.

Bogut’s left shin collided with Miami Heat forward Okaro White’s knee early in the second quarter at Cleveland’s Quicken Loans Arena on Monday night, the big Australian centre fell to the floor in agony and immediately told team-mates and medical staff he thought it was broken.

The break was so loud TV microphones captured it.

Despite the noise from 20,000 fans, superstar James said he heard the sickening crack.

“I heard it break,” James said.

Bogut was carried off the court by team-mates Tristan Thompson and James Jones, unable to put pressure on the leg, and soon after the Cavaliers confirmed X-rays showed a fractured tibia.

A minute into Andrew Bogut's Cleveland Cavaliers debut and he was helped off the court with an apparent leg injury. pic.twitter.com/TUEkiHLtic

Bogut only signed with the Cavaliers on Thursday and his season is almost certainly over. 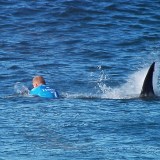 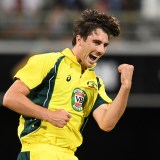 An hour before the game he was in great spirits and excited to have joined the reigning champions and eastern conference leaders, considered to have one of the deepest teams in history with 12 players who would be legitimate starters in other clubs.

James had also glowed pre-game while speaking about the rim protection, deft passing and solid screens the 213cm tall Bogut would bring to the Cavaliers.

“We were excited about the acquisition to bring him in here.

“It’s a tough one, not only obviously for him, but for our ball club.”

Bogut had reporters in stitches before the game as he joked about advice former Cavaliers’ guard and fellow Aussie, Matthew Dellavedova, gave him about Cleveland.

“He said it is a terrible city,” Bogut said.

Bogut also joked about how he was able to clear up a work visa issue he had with the US government caused by his move from the Dallas Mavericks to the Cleveland Cavaliers, via the Philadelphia 76ers, the past fortnight.

The issue forced him to sit out Monday’s pre-game shootaround.

“I came to the facility and they said ‘You can’t go right now. You have immigration issues’ so I called Vladimir Putin and got it done’,” Bogut, scoring more laughs, said.

The injury is just the latest in a long list that have dogged his 11-season career.

Discussing his past injuries, Bogut hauntingly described to reporters how his playing style often led to issues with his body.

“I play hard-nosed style so I get hit and deal with the repercussions after it happens,” Bogut said.

The Heat dominated the lacklustre Cavaliers on the night, winning 106-98.