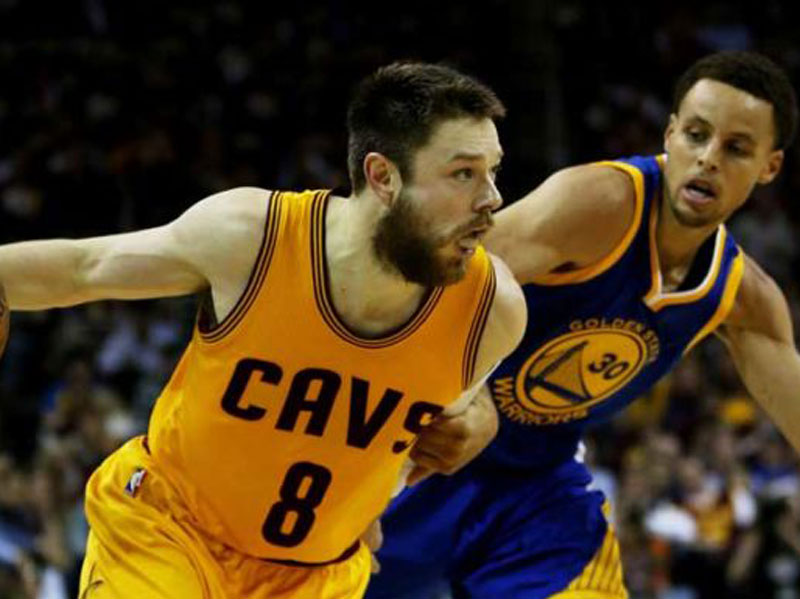 Matthew Dellavedova has hit the NBA jackpot with a four-year, $US38 million deal to play for the Milwaukee Bucks.

The point guard from country Victoria – known for his scrappy, aggressive, blue-collar effort on the basketball court – will now be anything but working-class as he becomes one of Australia’s highest paid sportsmen.

Dellavedova was one of the Cleveland Cavaliers’ lowest paid players last season with a salary of $US1.2 million.

LeBron James, Dellavedova’s leader during the Cavaliers’ recent NBA championship winning run, was quick to congratulate what is now likely to be his former teammate.

“Congrats to my brother! @matthewdelly on his deal,” James wrote on Twitter.

“Good luck to you in Milwaukee!

“Very deserving to you and your family.”

Congrats to my brother! @matthewdelly on his deal! Good luck in Milwaukee! Very deserving to you and your family. 1

The Dallas Mavericks, Sacramento Kings and the Atlanta Hawks were all reportedly in the hunt for Dellavedova.

Cavaliers had offered Dellavedova $US1.4 million to retain his services and they could keep him if they match the Bucks’ offer.

Dellavedova, who is in Australia preparing for the Olympics, and the Bucks will not be able to sign the contract until July 7.

However, as the tone of James’ tweet suggests, it is unlikely the Cavaliers would be willing to sign Dellavedova for such a high price.

As beloved as Dellavedova was by James, Cavaliers’ teammates, coach Tyronn Lue and team management, the Australian had a sub par playoffs and lost his back-up point guard role to veteran Mo Williams in the last two games of the finals against the Golden State Warriors.

Dellavedova did not leave the bench in the Cavaliers’ decisive game seven win.

If Dellavedova does join the Bucks he will play alongside 216cm tall Australian rookie Thon Maker, selected by Milwaukee last week with the 10th pick of the draft.

The huge offer by the Bucks was just one of many announced by teams the past 24 hours as a gold rush type atmosphere to sign players overtook the league when free agency began.

A new nine-year, $US24 billion TV deal signed by the NBA has kicked in and increased team salary caps from last season’s $US70 million to 2016/17’s $US94 million.

Australian big man Aron Baynes’ teammate at the Detroit Pistons, centre Andre Drummond, is reportedly nearing an agreement on a five-year, $US130 million deal to stay with the team, despite recording the worst free throw percentage in NBA history.

Drummond shot just 35.5 per cent of his free throws in the regular season, smashing Wilt Chamberlain’s deplorable 38 per cent record set in 1967-68.

Andrew Bogut, on the final year of a three-year $US36 million contract with the Warriors, remains Australia’s highest-paid NBA player.

Baynes signed a three-year, $US19.5 million contract with the Pistons while recent number one draft pick Ben Simmons will earn about $US15 million in his first three years with the Philadelphia 76ers.

‘Delly’ cashes in with $US38 million NBA deal