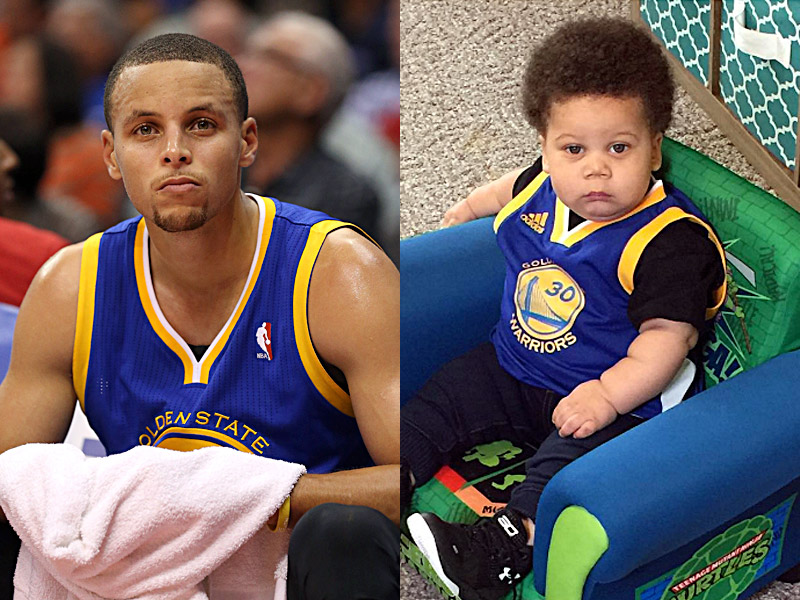 Steph Curry, take a seat. There’s a new star of the NBA playoffs and his name is “Stuff Curry”.

Landon Benton, a baby doppelgänger of the Golden State Warriors point guard, has gone viral after a stranger gave him the nickname in February.

But she quickly decided to embrace it to “take control” of the issue.

“I wanted to really turn it into something good and take control of it and say, ‘OK, we’re gonna own this name. Yeah, we’re Stuff Curry. We look like the famous basketball player’,” she said in an interview with ESPN.

What many didn’t know when Landon, or “Stuff”, who is 10 months old and from Illinois, first went viral, was that the Benton family lost their 20-year-old son when Jessica was pregnant.

He was reportedly bullied in high school and she wouldn’t have another one of her children subject to the same duress.

“I can’t say it’s directly due to bullying or anything, but I have one kid who’s not here with me who told me that people made fun of him,” she said.

“I’m not going to have another kid think that the whole world was laughing at him.”

After deciding to embrace the “Stuff” moniker, Jessica took to Google to gather more information on Steph Curry.

Her research ended up with numerous purchases from the Golden State Warriors, including an official playing shirt and a basketball.

Then, she decided to dress Landon in Curry’s kit and gauge the response.

Fans flocked in their thousands as “Stuff” quickly became an internet sensation.

He currently has over 40,000 followers on Instagram. Now, nobody is laughing at Stuff Curry.

Unfortunately for the NBA star, his Golden State Warriors team – the defending NBA champions – were beaten by the Oklahoma City Thunder on Wednesday (AEST).

The Thunder’s 118-94 victory in Game 4 of the Western Conference Finals gives them a 3-1 lead in the best-of-seven match series.

Curry, who was again voted the NBA’s Most Valuable Player this season, was unusually quiet, shooting just 19 points at 6-of-20 from the field and, even more surprisingly, at 2-of-10 from three-point territory.

The winner of the series will meet either the Cleveland Cavaliers or the Toronto Raptors in the NBA Finals.

That series is tied at 2-2 after four matches.