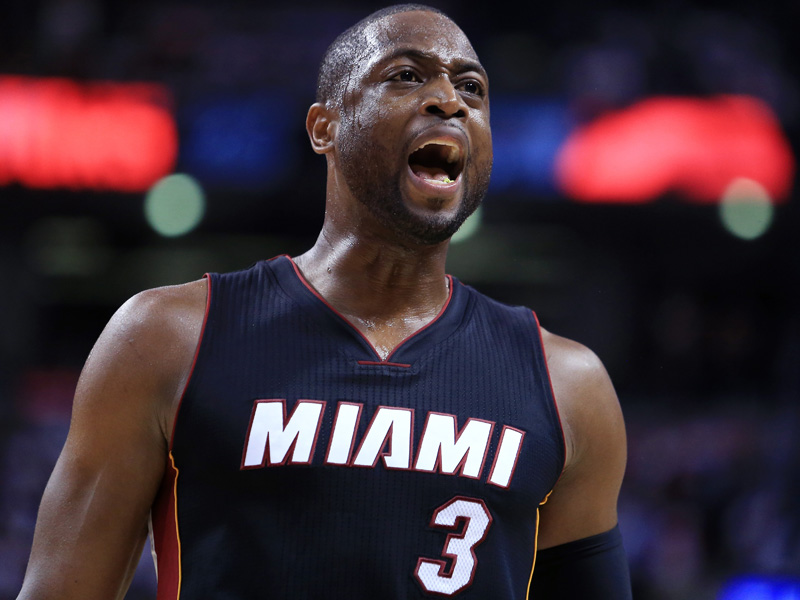 Basketball megastar Dwyane Wade has sparked outrage after failing to line up with his teammates for the Canadian national anthem.

The Miami Heat guard was taking practice shots while O Canada was sung, prior to his team’s NBA Playoffs loss to the Toronto Raptors in Miami on Monday (AEST).

Members of Toronto’s local parliament said they were “disturbed” by the incident, while the NBA warned Wade that he had broken a rule pertaining to conduct during national anthems.

Despite that, Wade defended his actions and his character after the match.

“I’m not a disrespectful person,” Wade said. “So if anybody thinks I’m being disrespectful to a country, then they don’t know who Dwyane Wade is.

“If people aren’t here, they see video footage of what they want to see.”

Wade said he meant no harm and blamed poor time clock management for the incident. He stood with his teammates for the United States national anthem.

Watch a video of the incident below:

The outrage was led by Ontario legislature member Mike Colle, who released a statement addressed to NBA Commissioner Adam Silver.

“As an elected member of Ontario’s provincial parliament in Toronto, I am most disturbed by Mr. Dwayne [sic] Wade’s total disrespect for our national anthem shown prior to last night’s game,” Mr Colle wrote.

“On behalf of many Canadians and my constituents who respect Mr Wade as an exceptional athlete and who love basketball, I ask you as NBA Commissioner to formally seek a public apology from Mr Wade whom I’m sure regrets his mistake.

“Thank you for your hoped immediate attention to this urgent matter.

“I’m certain that similar disrespect for the American anthem would not be tolerated.”

This was followed by tweets from Toronto’s mayor John Tory and city councillor Norm Kelly:

There should be no music played in the @AirCanadaCentre when @MiamiHEAT is back in Toronto. Just the national anthem. The whole game.

NBA spokesman Tim Frank said the league would work with Wade and Miami Heat players to make sure pre-game routines would not “interfere with either anthem going forward”.

There was no indication that Wade would be punished by the NBA.

All other games have only the US anthem played prior to tip-off.

In 1996, Denver Nuggets’ Muslim player Mahmoud Abdul-Rauf was suspended without pay by the NBA for failing to stand during the US national anthem due to his religion.

“The NBA’s rule on this point is very clear, and all our rules apply equally to all players,” NBA deputy commissioner Russ Granik said at the time.

Despite receiving widespread condemnation in Canada, Canadian sports columnist Bruce Arthur defended Wade and blamed the mishap on a problem with timing by those running the event.

“National anthems before pro sporting events are kind of silly anyway. Just play Thunderstruck by AC/DC, or something like that, and off you go,” Arthur wrote for thestar.com.