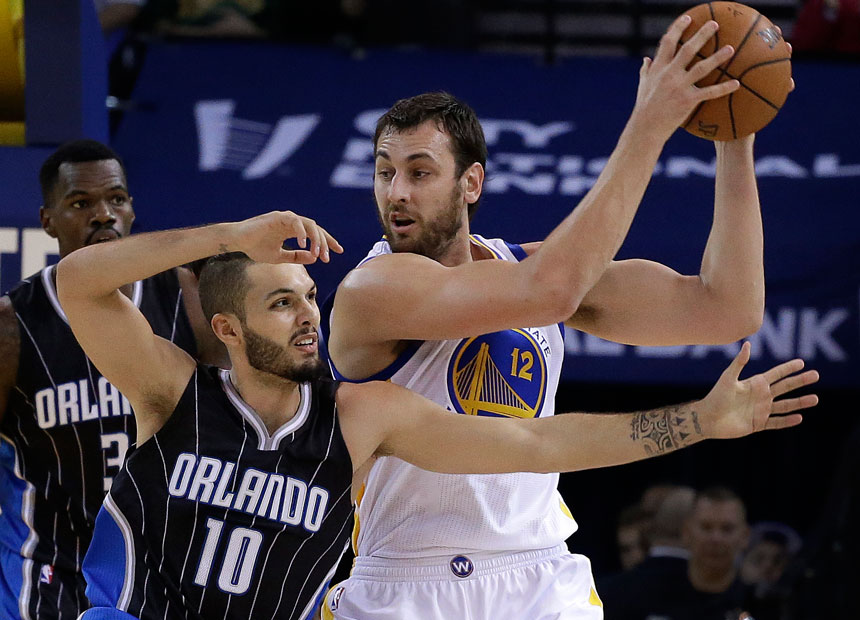 Built around a boy from a working class suburb in Melbourne’s south-east, the Golden State Warriors are beginning to feel like true NBA championship contenders.

The Warriors currently lead the league with a win-loss record of 21-3, despite having their 16-game winning streak broken on Wednesday by the Memphis Grizzlies.

That loss came without Bogut – who describes himself as “awkward and lanky” – who has missed the past four matches with knee inflammation.

Several commentators believe the 213cm centre’s absence over the past four games has seen an overall drop in the team’s performances, though the man himself would laugh off any such suggestions.

Bogut is no stranger to injury – he describes his recent years on the sidelines as just “the trials and tribulations that everyone goes through in life”.

“This is just mine.”

Cynics may suggest injury in the middle of a reported three-year $US44 million contract isn’t a “trial and tribulation” at all and that he is trivialising the struggles of those less fortunate than himself.

But Bogut knows all too well the importance of hard work given his background and body.

His huge frame is both a blessing and a hurdle in a league where games are played in such quick succession meaning durability is vital.

He has played 11 of his 20 games this year off only one day’s rest, while four matches were played back to back.

Bogut says he reached his potential and peak form in the 2009/10 season but further injuries since a horrific arm break in 2010 have slowed him down.

“It’s frustrating when I know I can do more … I am playing my role fine but I known I can offer more,” he told The New Daily.

“There is plenty of room for improvement.”

Bogut’s quest to the NBA began when both sides of his family migrated to Endeavour Hills in Melbourne’s south-east from Croatia when “tensions started again” in the 1980s.

Like many outer suburbs of Melbourne, it was a mix of European and African immigrants with an Anglo origin population.

Purposefully created with plenty of walking tracks, open reserves and sporting facilities, Bogut says it was an environment that’s helped him greatly.

“I grew up in a working class suburb in and around what some people would say are some undesirable suburbs like Dandenong and Doveton,” explained Bogut.

“I became street smart at a very early age and very aware of my surroundings and how the world works.

“It hardened me up a fair bit and prepared me for being in the world of NBA.”

More importantly, his surroundings speak to him having a humble appreciation of his current position.

“It just goes to show anything is possible in all walks of life,” he says.

“It’s all labourers (in his hometown) there isn’t many suits in those areas and generally most people are working in a factory – my parents did, so you just come to respect and know that anything is possible in life with hard work.”

“Out in the suburbs we had to entertain ourselves for the most part so we played a lot of sports. And basketball was starting to boom in the 90s with the NBA, you know.

“When that was happening we had one of the biggest (grassroots) basketball facilities in Dandenong and I think it still is. “

A 2014 report into Sport & Active Recreation by the City of Greater Dandenong found that more people over 15 played basketball as opposed to soccer, cricket, tennis and Aussie Rules, and that the area’s basketball participation levels are significantly higher than national averages.

But just because it is popular, doesn’t mean it was easy to follow in the 1990s.

“At school in Information Technology I’d try to sneak on NBA.com and print out the stats and bring them home with me to study and that was basically all I got,” he says.

How Bogut went from battler to NBA star