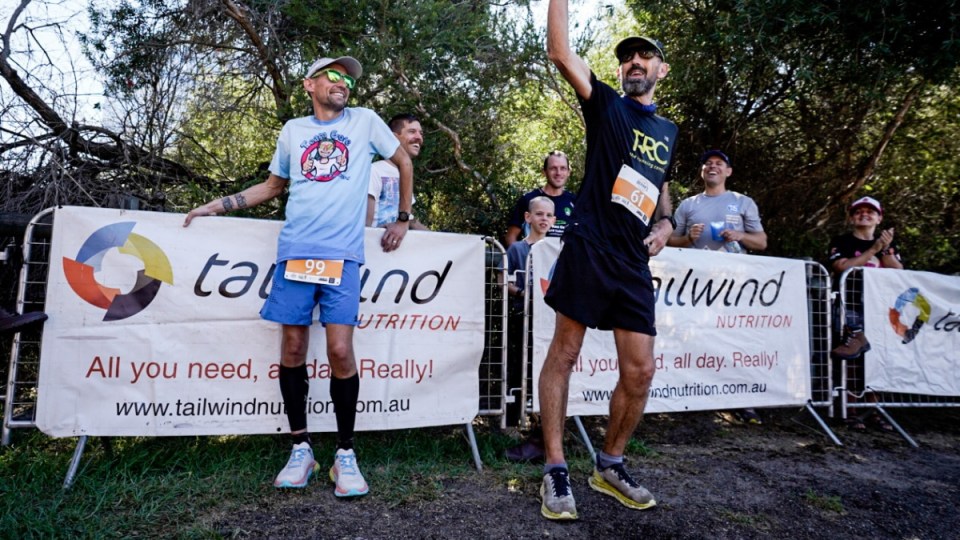 Phil Gore (left) and Kev Matthews at around the 44th lap of the ultra marathon. Photo: Marco Noé/Mnfilm

Phil Gore ran almost 322 kilometres in 48 hours last weekend, beating the previous Australian record of 46 hours. He estimates he got just one hour of sleep.

Mr Gore competed in an event called Herdy’s Front Yard Ultra, in which participants compete around a 6.71-kilometre circuit.

They have one hour to compete each lap. If a runner finishes a lap in under an hour they can use the time to rest, before the runners set off together again on the next lap.

The winner is the last person to stop running.

No aim to beat record

Mr Gore told ABC Radio Perth’s Christine Layton he entered the race hoping to beat his personal best of 39 hours, and get close to the Australian record of 46 hours.

“In these sorts of events, you can only go as far as the second last person pushes you,” he said.

By lap 42, just two runners remained in the race – Gore and Kevin Matthews.

“Kevin Matthews, or big Kev as he is known in the running community, he was a trouper.

“I was talking to him at about lap 42, I was dragging him around the course, saying ‘come on, get this one done’.

But despite nearly two days of running, both men found extra reserves of energy.

“But then [Kev] pushed himself all the way to lap 47 and credit to everyone else that encouraged him along the way.

“If he hadn’t done that 47 hours then I wouldn’t have done that 48th lap, because you can only go one lap more than the second last person.”

Finishing the final lap, which brought him to 321.6 kilometres, was an exhilarating experience.

“That last lap, for the first three kilometres I was going a lot faster than what I had been,” he said.

“I slowed it down but still came in at a fairly quick pace and I crossed the line in about 33 minutes.

“It was just relief, elation, everyone was there cheering me on.

“I could hear them as soon as I started coming down that last hill, people could see me and they started erupting into applause.”

Training and preparation the key

He puts his success in this race down to thorough preparation and training.

“The last event I did like this I got to 39 hours and I was absolutely broken at the end of it.

“I had to be carried away from the start line.

“[This time] I was doing a lot more k’s leading up to it, working with a coach and had a proper training plan in place, so I think my body was just better prepared.”

To get through the laps, he spent his time chatting to other runners, listening to audio books and thinking about what he needed from his support crew at the end of the lap.

“I think towards the end what is going through your head is why did I sign up for this?

“Why am I running for this long? I just want to go home and go to sleep.”

Sleep was only possible during the race in the short breaks at the end of each lap.

“On the first night, for six of the laps I was getting in quicker so I could have about 20 minutes to just close my eyes.

“The second night it was a bit easier to try and fall asleep because I was a lot more tired.”

The day after the race, and a night’s sleep, he was feeling better than expected.

“I am a little bit sore this morning, but I actually pulled up a lot better from this race than a few of the other big ones I have done.

“Normally I am hobbling round on crutches.”