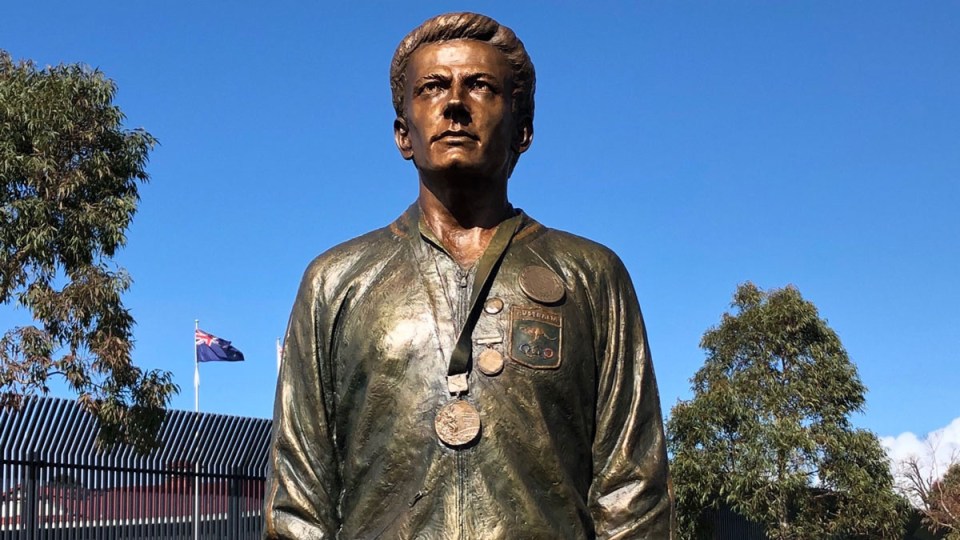 He went there: 1968 Olympic silver medallist Peter Norman helped stand up to racial injustice and has since been immortalised in bronze. Photo: Tom Cowie/Twitter

It’s one of the most iconic podium protests in world sporting history.

The Black Power Salute, and the US civil rights movement at large, was thrust onto a global platform.

The simple act of showing compassion for his fellow man became fodder for Australian athletics officials to bar him from future Olympics teams, despite qualifying for the 1972 Munich Games.

He was forgotten by the history books for half a century. But now, they look kindly upon one of Australia’s most revered athletics legends.

In 2006, the USA Track and Field Federation moved to declare October 9 – the day of his Melbourne funeral – as Peter Norman day.

His US competitors became his pallbearers.

Federal Parliament took the extraordinary step to correct the record in 2012, apologising for the mistreatment Norman faced for standing up to racial injustice.

And 13 years after his death, his legacy has been immortalised with the unveiling of a bronze statue outside Lakeside Stadium, south of Melbourne’s CBD.

Victorian Parliamentary Secretary to the Treasurer Steve Dimopoulos said Norman’s bravery serves as a reminder of values Australians should aspire towards.

“Peter Norman made a stand for humanity 51 years ago and it is a great thing that future generations of Victorians will know his story of strength and decency,” Mr Dimopoulos said.

Wednesday’s unveiling ceremony was attended by a large cohort of Norman’s family.

The group included mother Thelma who, without fail, always carries a bag emblazoned with the famous photograph.

The athlete’s daughter, Janita, said her father never felt fully embraced by Australia before his death. But, he would have been thrilled to have his memory honoured in such a way.

“It’s a good representation – he’s standing tall and proud as he did on the dais,” Ms Norman said.

Family gather in Melbourne at the unveiling of a statue honouring Peter Norman, recognised not just for his 200m silver medal at the 1968 Mexico Olympics, but his brave stand in solidarity with two American athletes in a silent civil rights protest on the dais. @abcmelbourne pic.twitter.com/4Sr7UbQE59

“He was never one to seek recognition or to push his own agenda or story but I think he would have been absolutely delighted.

“People will now see Peter, and people will know Peter Norman – who he was, what he did and what he stood for. Inspirational then, inspirational now.”

And perhaps now, with his stoic, political stance on full display, budding athletics champions may be inspired to walk, or run, in his formidable footsteps.