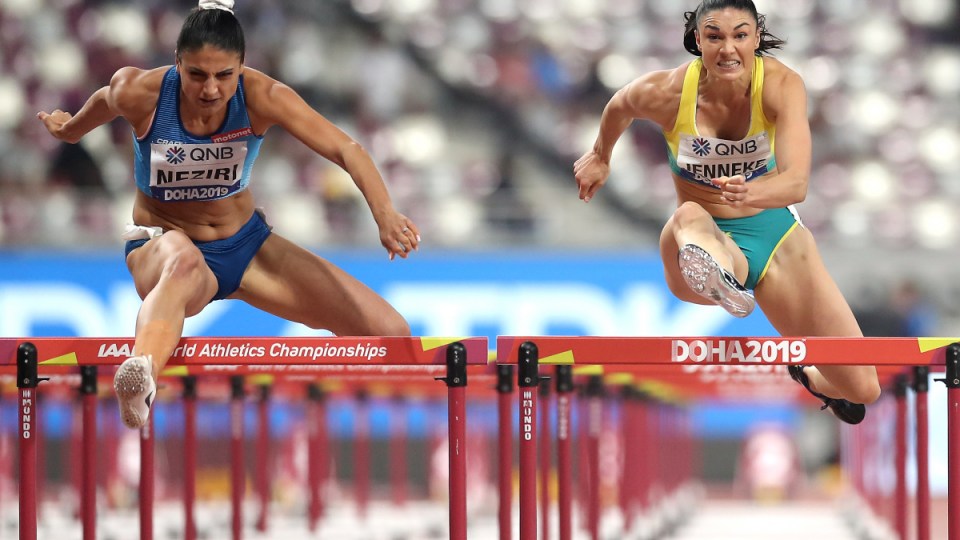 Michelle Jenneke has paid tribute to Sally Pearson’s legacy for the next generation of Australian 100m hurdlers at the World Championships in Doha.

Having reluctantly announced her retirement two months ago after a long battle with injury, Pearson’s only official role in Doha has been as a part-time commentator with the BBC.

But she still casts a giant shadow over the sport of track and field – particularly the 100m hurdles, the event in which she won Olympic gold in 2012 and two world titles.

As the 2017 world champion, Pearson had a guaranteed wildcard for Doha 2019, had she chosen to take it up.

But in her absence it was left to Jenneke, Brianna Beahan and Celeste Mucci to fly the Australian flag.

Jenneke clocked 12.98 seconds in the heats on Saturday night – the first time she had broken the 13-second barrier this year – and advanced to the semis along with Beahan.

“Sally is a great loss,” said the 26-year-old Jenneke. “She is an amazing competitor and she was an amazing athlete and I loved racing her every single second, she pushed me to fast times.

You see the cohort of girls we have got racing now, we have got three girls at the world championships which is absolutely amazing and Sally has to take a lot of credit for that.</p> <p>

“The way she has pushed us along, we have probably got one of our best eras of hurdling at the moment.

“It is a huge loss not being able to race against her.”

Beahan, 27, is far less known in wider Australian sporting circles than Jenneke. But she has also benefited from competing in the same event as the sport’s long-time Australian standard-bearer.

“It’s so nice having Sal there with us and it’s disappointing seeing her go injury-wise,” said Beahan. “It would have been nice for her to be able to finish on her terms.

“Sal is a friend, she’s someone who comes out and helps us athletes now that she has the time to be able to do it – and even when she was an athlete she did it for us. But we’re all our own athletes and I have to have the attitude of going out there and doing it for me.”

Australia’s two 4x400m relay squads were both eliminated in the opening round in Doha on Saturday night.

The women’s team who finished sixth in their heat included 16-year-old Queenslander Ellie Beer, the second youngest athlete to represent Australia at a world championships.

London Olympics individual 400m finalist Steve Solomon got the inexperienced men’s 4x400m team off to a flying start, but they trailed off to finish eighth.