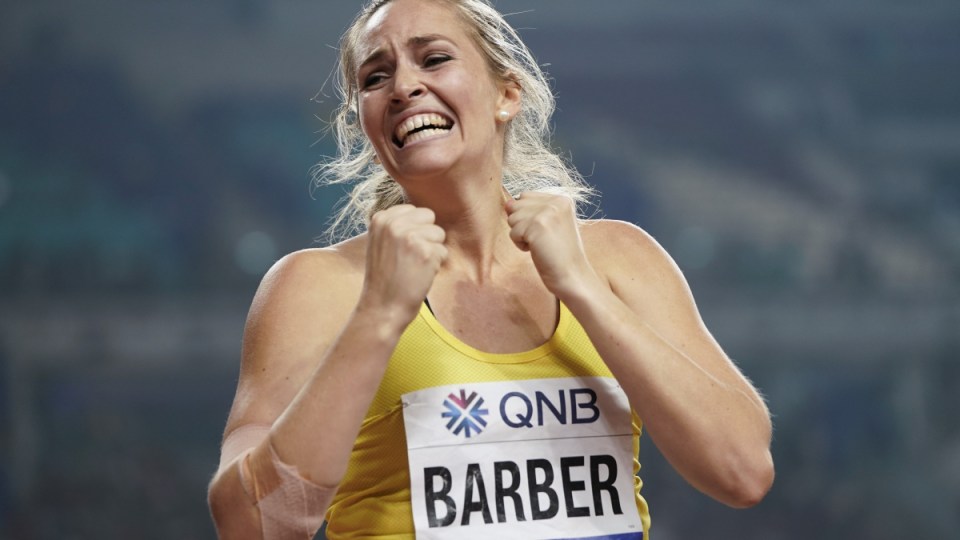 A huge final-round throw has earned Kelsey-Lee Barber the gold medal in the women's javelin at the world championships. Photo: AP

Australian Kelsey-Lee Barber has produced a clutch final-round throw to triumph in the women’s javelin at the world athletics championships in Doha.

The 28-year-old claimed the world title in stunning fashion, leaping from fourth place to first after her closing effort achieved a distance of 66.56m.

“I didn’t know how far it was as I was still waiting to watch it fly over that line but it certainly felt like a really clean throw,” she said.

Having lengthened her run-up on the advice of coach and husband Mike Barber, the South African-born athlete was able to produce the goods with a throw that bettered her previous efforts by nearly three metres.

“With easy, clean throwing you normally know they are quite good throws.

“I thought it had snuck over 65 so I was just waiting to see the numbers come up.

“Then to see 66 and jump into first place my head was spinning a bit.

“But I was like ‘wait, I can’t celebrate too early because I have still got three girls to go’.”

She needn’t have worried, as the throw proved too much of a challenge for the remaining competitors.

Barber came into the championships ranked No.2 in the world this year courtesy of a brilliant season highlighted by a personal best of 67.70m in Lucerne in July.

But she looked out of sorts in the qualifying round in Doha on Monday, only scraping through to the 12-woman final in 10th place.

Barber settled her nerves on Tuesday night with a solid opening throw of 62.95m, but with one round to go in the final she had only improved to 63.65m and a podium finished looked unlikely.

Afterwards Barber paid tribute to her coach and husband.

“It’s wonderful and I wouldn’t be able to do this without him,” she said.

“And especially tonight my performance couldn’t have been achieved without him on the fence.

“There were technical cues as much as anything but just to have the support to say ‘you’re good’ or ‘cool, calm down a little bit’.

“The emotional connection is what makes it so special and so enjoyable.”

It was only the second throwing gold medal won by an Australian at a world championships.