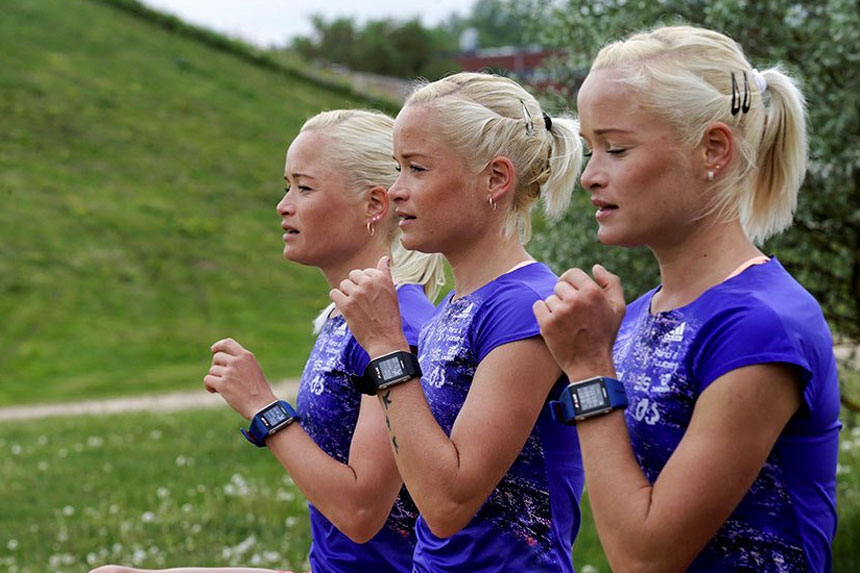 Sport is full of stories of twins competing in the same event.

Cricket stars Steve and Mark Waugh are perhaps the most famous in Australia, while Bob and Mike Bryan have ruled the doubles world in tennis.

Tales of triplets are far rarer and, until now, have not been told at the Olympic Games.

That’s all about to change, though, with Leila, Liina and Lily Luik of Estonia set to make history when they compete in the women’s marathon this year.

The trio, from Tartu, are 30 years old. Amazingly, they had not been interested in competitive running only six years ago.

But that has quickly changed and their rapid adaption – and obvious skill – will see them compete for gold in Rio de Janeiro in August.

“We have been active since childhood, we love dancing, we love to be active and this pushed us to professional sports,” Lily said.

It was the urging of Liina that got the sisters running – and they prefer long-distance because of its simple nature compared to the highly technical process of sprinting.

A couple of years into their running, the sisters realised they were good enough to compete internationally.

And, from there, an Olympic dream was born.

The sisters coined the term ‘Trio to Rio’ and ramped up their training in their ambitious bid.

Lily added: “After one year we had good results in Estonia and we thought we could achieve something good – also outside of Estonia.

“(We wanted) to do some big competitions like European Championships and the Olympic Games.”

They live separately in Estonia and do occasionally train apart, but most of the time they practice together.

Their winters are spent together at a high-altitude training camp in Kenya and during races they often support each other, taking it in turns to act as wind breakers.

Ahead of a pre-Olympics training camp in Italy in June, Leila said: “It’s boring to train alone.”

Despite their lofty dreams, chances of success for any of the Estonian trio are unlikely in Rio.

The women’s event is often dominated by African runners, with Ethiopia’s Tiki Gelana running a superb 2 hours, 23 minutes and 7 seconds to win the 2012 race in London.

Times for the silver and bronze medals were also within two hours and 24 minutes.

Liina’s personal best is just inside 2 hours and 40 minutes, while Lily is slightly slower.

It means that glory – in terms of medals – seems highly unlikely.

“It’s like our dream – and we know that we have to live in reality.

“It is very hard to compete against the Kenyan runners. We are not at the same kind of level as they are now, but in two or three years we can do that.”

Instead, the glory on offer for the sisters is personal bests. They want to finish the race together, too.

The world will be watching.