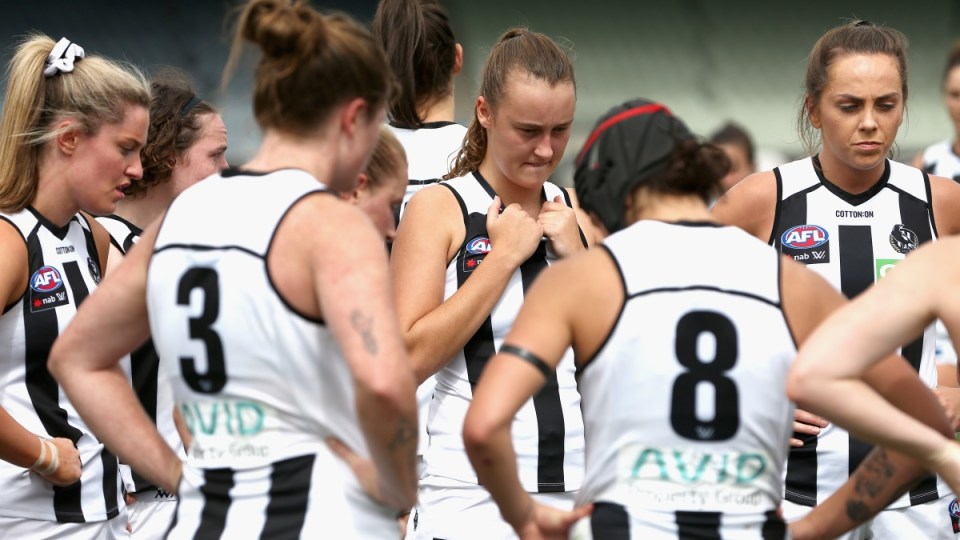 An AFLW final between Collingwood and Brisbane has been postponed because of a COVID-19 outbreak. Photo: AAP

The AFLW knockout final between Brisbane and Collingwood has been postponed at the Magpies’ request after a host of players entered COVID-19 health and safety protocols.

The outbreak on the eve of the finals threatens to wreak havoc on another season climax after the 2020 campaign was suddenly cancelled at the start of the global pandemic.

The league is working with the Magpies to determine a new date for the qualifying final, which was due to be played on Saturday at the Gabba.

Saturday’s other qualifying final between North Melbourne and Fremantle will go ahead as planned.

Adelaide and Melbourne are scheduled to host preliminary finals the following weekend.

AFLW rules state teams must have at least 16 squad members available for selection for a game to proceed.

The team can be topped up by players from outside the AFLW program, but the Magpies have reportedly been left with just 14 regulars to pick from.

Details of Collingwood’s issues emerged on Wednesday as Victoria recorded a five-week high of 9426 new cases, with NSW also reporting a dramatic spike.

The Magpies’ men’s team has also been affected, with coach Craig McRae revealing forward Will Hoskin-Elliott and assistants Brendon Bolton and Josh Fraser are all isolating at home.

They will all miss the round-one meeting with St Kilda at Marvel Stadium on Friday night.

The Eagles also have a raft of injuries to deal with and may have to call on top-up players for Sunday’s game against Gold Coast.

All 18 men’s teams have lists of top-up players available this season in anticipation of COVID-19 continuing to affect the league.

But the AFL is adamant that the season will go ahead as scheduled.