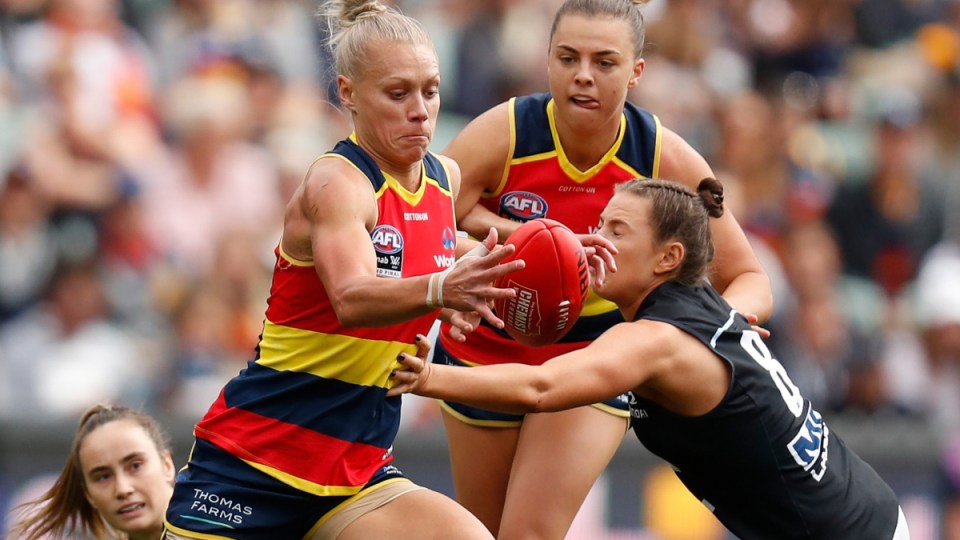 Erin Phillips was one of the key drivers lifting the Crows to end the home and away season on top of the ladder.Photo: AAP Photo: Getty

Chelsea Randall has made a successful return from injury as Adelaide secured the AFLW minor premiership with a 39-point win over lowly St Kilda.

Star pair Ebony Marinoff and Erin Phillips shone as the Crows took control after quarter-time on Sunday, kicking away to post a 7.11 (53) to 2.2 (14) victory at RSEA Park.

The result gave Adelaide a 9-1 record for the season, with a superior percentage lifting them above Melbourne at the top of the ladder.

Adelaide are the only team in the women’s competition with multiple premierships and are aiming for a third flag this season.

They will start the finals series as favourites to atone for last year’s near miss, when they were beaten by Brisbane in the grand final.

Saturday’s win was a comfortable tune-up, with Marinoff (25 disposals) and Phillips (19) finding plenty of the ball against the lowly Saints.

Woodland’s 2.3 made her the competition’s leading goal-kicker for the home-and-away season with 19, one clear of both Melbourne star Tayla Harris and GWS forward Cora Staunton.

Crows captain Randall had sidelined by a right hamstring injury since round four and got through her comeback match in a positive sign ahead of the finals.

She finished with 10 disposals, while first-round draft pick Zoe Prowse enjoyed a win on her debut.

But there is concern over experienced forward Justine Mules, who hurt her left arm in a marking contest late in the match.

St Kilda benefited from a strong breeze at their backs in the opening term and took a three-point lead to the first break after Hannah Priest kicked the first goal of the match.

But the Crows asserted their authority in the second quarter, piling on 3.4 and holding the hosts scoreless.

The Saints also failed to score into the wind in the final term as the visitors extended the margin.

It would have been greater if not for some wayward Crows kicking in front of goal.