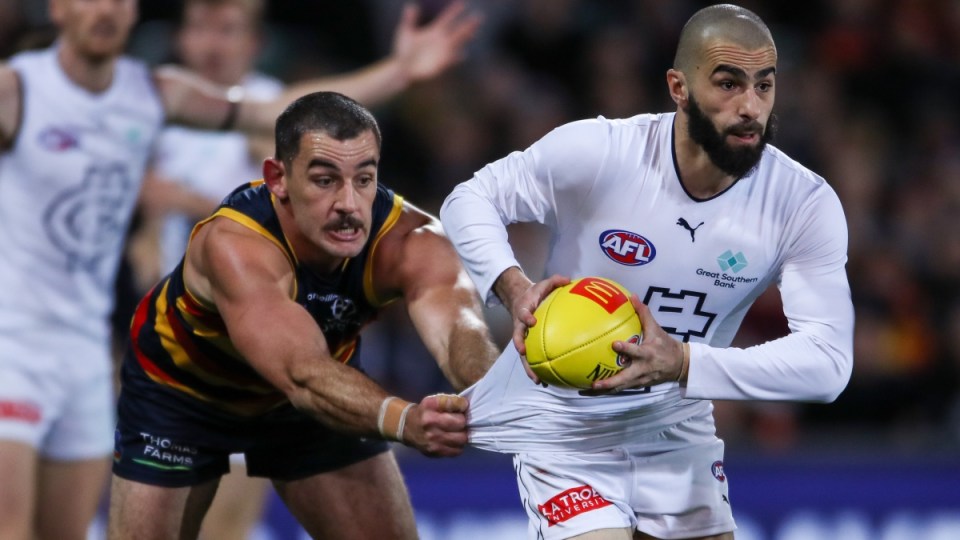 The AFL is investigating claims Adam Saad was racially abused during Carlton's loss to Adelaide on Saturday night. Photo: AAP

Carlton defender Adam Saad believes education is key to stopping racial abuse at AFL matches after claims he was called a “terrorist” by a spectator during the Blues’ shock loss at Adelaide Oval.

The AFL is investigating the allegation, made by a Carlton cheer squad group against a member of the crowd, following the Blues’ clash with Adelaide on Saturday night.

Saad, an Australian Muslim, addressed the issue at Adelaide Airport on Sunday.

“We’ve just got to educate around making comments like that,” the 28-year-old told reporters.

Adam Saad has spoken with the grace & class we all know him so well for. Such an incredible human being. This is via his Instagram Account: pic.twitter.com/HM4SndxdW9

“At the end of the day I know who I am as a person and us as a Muslim community.

“As long as we can educate the person and move things forward.

“Those things shouldn’t be said, but hopefully the club and the AFL will investigate and look after it.”

AFL officials are looking into the alleged incident

“The AFL is currently investigating alleged comments made by a spectator at AO (Adelaide Oval) last night,” a league statement read.

“Football is a place of inclusion and belonging and there is no place for racist behaviour in our game.”

Carlton is working with the AFL’s integrity unit to determined what happened.

“The club is fully aware of the seriousness of the alleged comments, and has been providing the appropriate level of support to its people as the matter is investigated,” a Blues statement read.

“The club makes clear that vilification of any kind is disgraceful, unacceptable and has no place in society, let alone our game.

“Further comment will be provided once the investigation is completed in full.”

The Crows are also looking into the claims made on social media.

“The Adelaide Football Club is investigating reports of an alleged racially motivated comment made by a spectator during Saturday night’s game against Carlton,” the statement read.

“We do not tolerate and strongly condemn any form of discriminatory behaviour and it has no place in football or society.

“Adelaide Oval should be an inclusive and family-friendly environment.

“Nobody in our game or in the community deserves to be discriminated and vilified against due to their faith or race and there is simply no excuse for it.”

In 2018 when Saad was playing for Essendon, the dashing backman tossed the coin with Richmond premiership hero Bachar Houli as a sign of solidarity for the Muslim community.

The gesture was prompted by an inflammatory anti-immigration speech from former controversial federal Senator Fraser Anning.