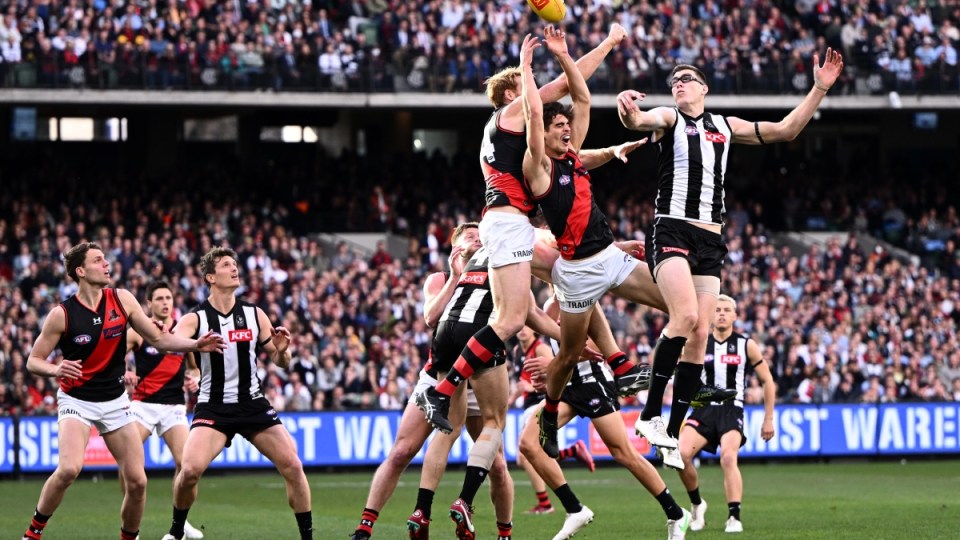 Collingwood has overcome Essendon in an MCG thriller with an after-the-siren goal by Jamie Elliott. Photo: AAP

Jamie Elliott has kicked Collingwood into the AFL’s top four after nailing a difficult after-the-siren goal to defeat Essendon in a four-point thriller.

The star forward marked about 40 metres from the boundary, before going back to calmly slot the goal after the siren blew at the MCG on Sunday.

Elliott was mobbed by all his Magpies teammates as 72,402 fans went ballistic.

The extraordinary 12.8 (80) to 11.10 (76) result makes it nine straight wins for the Magpies and puts them above Fremantle into fourth on the ladder.

Collingwood’s record in close games is bordering on ludicrous but this win was the most improbable of the lot.

After flying out of the blocks with the first six goals to lead by 37 points at quarter-time, Collingwood conceded 11 of the next 13 to Essendon as the Bombers grabbed a 21-point buffer in the final term.

But the Magpies resilience again came to the fore, kicking the last four goals of an exhilarating contest.

After Fremantle’s bizarre draw with Richmond on Friday night, the Magpies leapfrog the Dockers into fourth.

The only downside for Collingwood was a shoulder injury to Brayden Maynard, with the ace defender subbed out early in the last quarter.

The young forward did not receive a free kick after a tackle from Essendon defender Mason Redman made contact around his neck in the first quarter.

The umpire calling play-on sparked the Magpies crowd into action, jeering harder than they did all afternoon.

Incredible goal one week, high-flying the next for Sam Draper 😤#AFLPiesDons pic.twitter.com/NnnLZQuFcz

Redman was subbed out of the game in the third quarter after suffering internal bruising.

Nick Daicos grabbed all the attention last week when he starred with 40 touches and three goals in Collingwood’s win over Adelaide but it was older brother Josh who created a buzz this time.

Josh Daicos scored one of the goals of the season when he kept the ball in right on the boundary line, took two bounces, before snapping successfully at full pace.

Essendon has been one of the disappointing teams of 2022 but it is finishing the year with some promise, despite the agonising defeat.

The Bombers have claimed two top-eight scalps Sydney and Brisbane in the past five weeks and comfortably defeated other finals contenders St Kilda and Gold Coast.

Collingwood hosts Port Adelaide at the MCG next Saturday as it attempts to win a 10th straight game, while Essendon faces lowly North Melbourne.