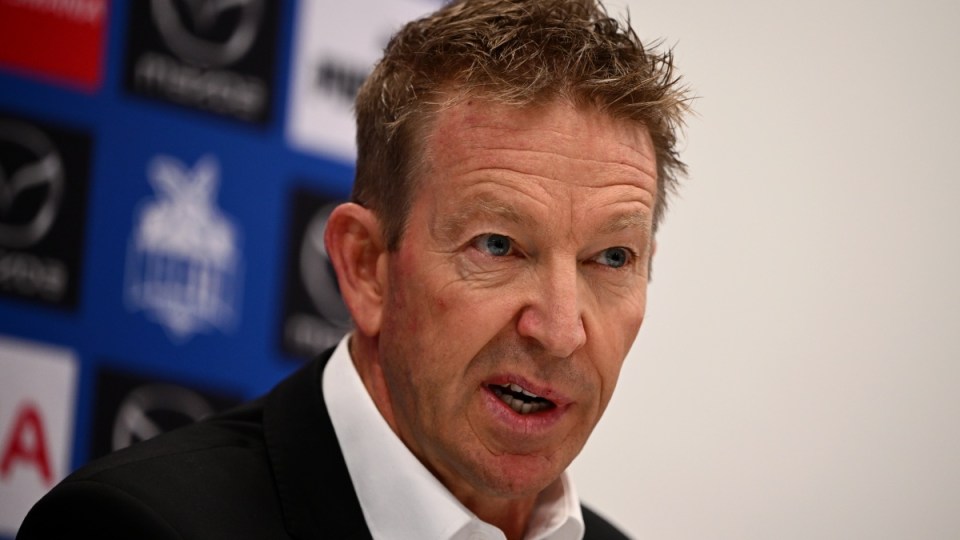 David Noble's stint as North Melbourne coach has come to an end with his sacking. Photo: AAP

Noble says he’s not surprised at being removed from a job he held for less than two seasons, describing it as the “right call” for himself and club.

“I am comfortable that I gave my all … but ultimately the scoreboard doesn’t make for great reading,” Noble told reporters on Tuesday.

Noble said he had laid a foundation for success in the longer term.

“There’s a little bit of pain to go before the team really kicks into gear,” he said.

“Until you get that next group of 20-gamers into the 50s and the 70s into the hundreds, there is still a little bit to go.

“But it’s a great club, it has got a great future … it’s a great opportunity for a coach to come and take on board the challenge.

“I am not going to be here, but we will survive. We will get better, we will make this turn around.”

The Kangaroos finished bottom last season and have won just once this year. Noble leaves a club on a 14-game losing streak.

“While we appreciate we are at the beginning of a rebuild, it doesn’t give us a free pass in terms of expecting competitive performances,” Hood told reporters.

“We entered this season optimistic … the pre-season sentiment internally was overwhelmingly positive.

“Resisting the urge to dream big, we set a simple benchmark: improve on last year … put simply, we have failed to live up to those expectations.

“We need time. The one thing you can’t fast-track in this industry, and any industry, is time.”

Hood refused to comment on whether the club had approached Clarkson, a four-time Hawthorn premiership coach who played with the Kangaroos.

Clarkson is taking a year away from coaching and has spoken to GWS about taking their vacant head coaching role next season.

“I am not even going to speculate on it,” Hood said.

She denied speculation the Roos had sounded out current West Coast coach Adam Simpson about returning to the club where he played.

Kangaroos players assembled at the club’s Arden Street headquarters on Tuesday morning and Noble told them of his departure, describing it as “one of the hardest things I have ever done”.

“They were shattered,” he said of the players.

“There was a lot of tears, a lot of emotion … it was bloody tough.”

He was sacked at crisis meetings on Monday by a club which was also rocked in May when national recruiting manager Mark Finnigan and list manager Glenn Luff walked out.

Assistant coach Leigh Adams will be North’s interim coach for the rest of the season, starting with Saturday’s clash against Richmond.