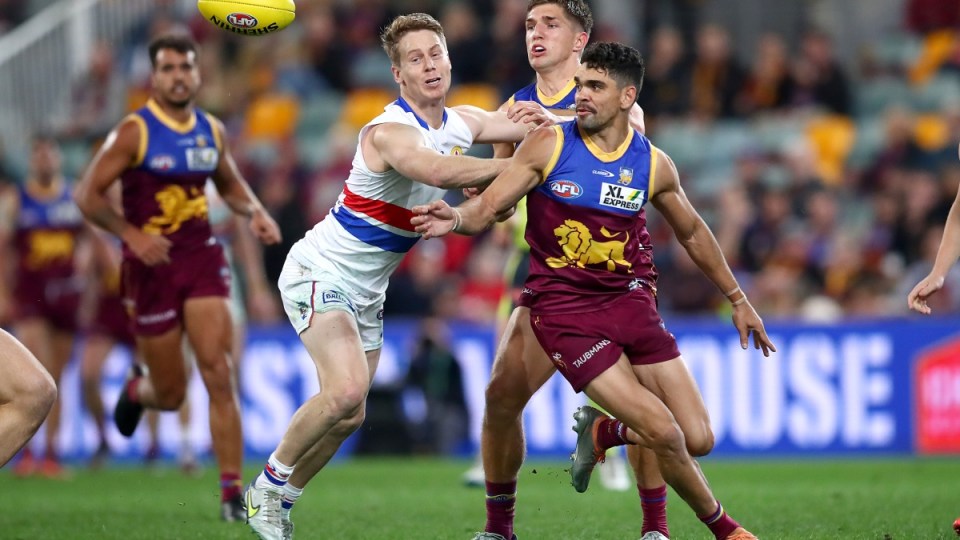 Dayne Zorko and Daniel Rich were early casualties but Charlie Cameron blasted Brisbane Lions back into the AFL winner’s circle with a 41-point defeat of Western Bulldogs.

Keen to respond after last week’s 64-point loss to Melbourne, the Lions were wobbling when down by 18 points early in the second quarter at the Gabba on Thursday night.

But their captain Zorko lasted just five minutes in his return from a hamstring injury that appeared to flare up, while All-Australian teammate Rich was also done before half-time with a hamstring complaint.

The Bulldogs (8-7) had won five of their past six games and beat Brisbane by a point in last season’s Gabba semi-final.

But the loss will likely see them on the outside looking into a tight top-eight battle, while Brisbane (11-4) moved back into second place.

Stoic full-back Harris Andrews and precise half-back Keidean Coleman turned the screws from defence to ensure the Lions remarkable regular season record at the Gabba since Easter Thursday in 2019 improved to 33-1.

Luke Beveridge’s Bulldogs had controlled the early stages, the Lions dropping off more than half their tackles to make just seven compared to the visitors’ 16 in the first quarter.

Tom Liberatore had five clearances – as many as the Lions combined – in a 11-disposal first term that also included a brilliant snapped goal from deep in the pocket.

The Bulldogs led by 18 points in the first quarter when debutant Dominic Bedendo was mobbed by teammates for kicking his first AFL goal.

But it was then that Brisbane responded, the buzz only dulled slightly when Oscar McInerney’s sneaky drop-kicked goal in traffic was curiously overruled as touched on the stroke of the main break.

Brisbane also hit the post four times in the first half, Zac Bailey snapping off the ground with the woodwork denying him a goal of the year contender.

Lions wing Jimmy Tunstill kicked his first AFL goal too, showing flashes of speed and skill in his second game.

Lachie Neale had 33 disposals for the Lions, while Liberatore matched him and Jack Macrae had 32 touches and 10 clearances for the Bulldogs.