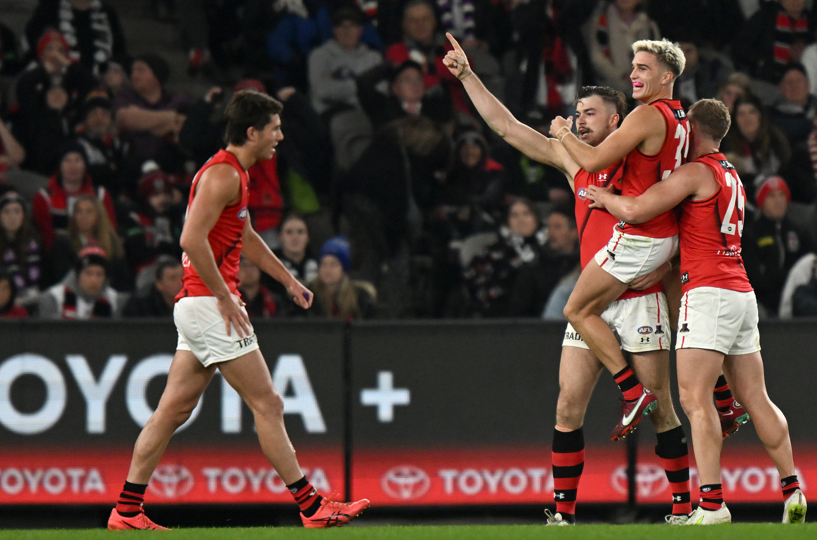 Watch the Bombers fly up! Sam Draper and Matt Guelfi celebrate another score in a six-goal blitz. Photo: AAP

They said they were down and out and not to be taken seriously – but nobody told Essendon, which powered to a runaway victory over much fancied St Kilda with a display of teamwork that was all spirit and never-say-die dedication.

Jake Stringer’s crucial third-quarter contribution has helped Essendon find a circuit-breaker in their horror AFL season with a 35-point upset of St Kilda.

The Bombers, missing prolific ball-winner Darcy Parish through injury, did it the hard way in their 15.17 (107) to 11.6 (72) triumph at Marvel Stadium on Friday night.

They were left stunned when a 28-point half-time advantage vanished at the start of a see-sawing third term.

The Saints piled on five goals in 14 minutes before the Bombers hit back with the next six majors, including two from Stringer at important stages, to rebuild a match-winning lead.

There was pressure on Stringer after what coach Ben Rutten dubbed a “poor” return from injury the previous week and he had no impact in the first half against St Kilda.

However, the explosive forward provided the spark when needed with 2.1 from nine disposals in the third term to help stave off the Saints’ challenge.

It led to Essendon’s third win of a disappointing campaign, snapping a four-match losing streak in the process.

For St Kilda (8-5), the result was a blown chance to move into the top-four amid a hot race for finals spots.

Andrew McGrath impressed in defence, where the Bombers were undermanned but stood tall.

St Kilda’s forwards had a distinct height advantage but rarely managed to make it count, with Max King (one goal) and Tim Membrey having little impact against Jordan Ridley and Jayden Laverde.

Small forwards Jade Gresham (three goals), Jack Higgins and Jack Billings (both two) were dangerous around goal for the Saints.

Gresham was outstanding with 28 disposals and four clearances, with Jack Sinclair (31 disposals) busy as always.

Criticised for a flat start to their 150th anniversary match against Carlton last week, the Bombers turned up the pressure and pounced on St Kilda’s early errors.

It led to a 16-point Essendon lead at the first break that would have been greater if not for some wayward shots at goal.

The margin grew to 28 points by halftime as seven different goal-kickers gave the Bombers their second-highest first-half score of the season.

Rowan Marshall and Paddy Ryder kicked the opening two goals of the second half from marks to kick-start the Saints’ challenge before Essendon steadied and hung on for a big upset.

Who was the King? How Elvis Presley devoted his life to a consuming passion
Tigers hold off Blues in tight tussle at wet MCG
Today's Stories

AFL: Underdog Bombers give Saints a lesson in teamwork and determination