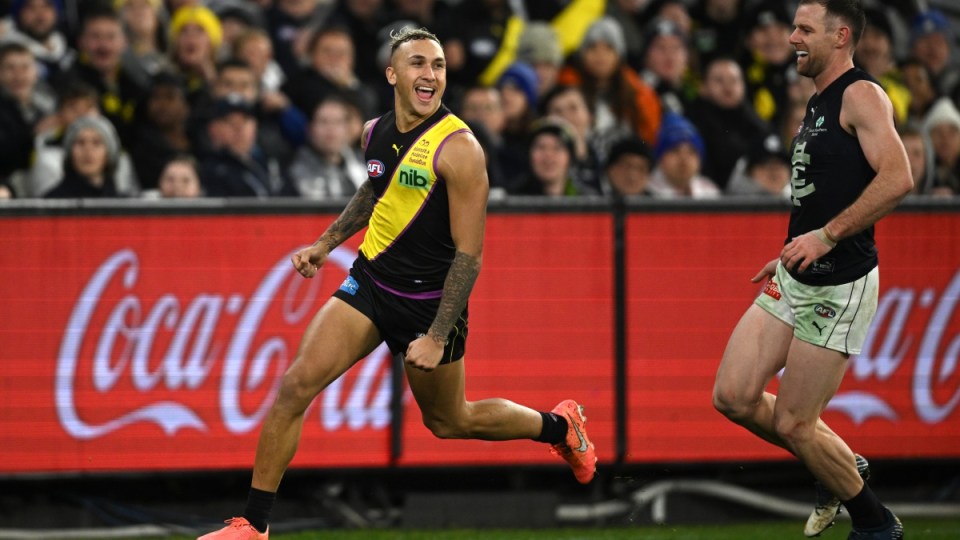 Richmond star Shai Bolton celebrates a goal after taunting his Carlton opponents at the MCG on Thursday night. Photo: AAP

Bookends Tom Lynch and Dylan Grimes have helped Richmond to a 15-point win over a fast-finishing Carlton, lifting the Tigers back into the AFL’s top eight.

The Tigers, with three goals from Lynch and Grimes keeping Charlie Curnow quiet, led by as many as 35 points and rode a huge fourth-quarter challenge to prevail 11.15 (81) to 9.12 (66) at a wet MCG.

Richmond (8-5) has now won six of its past seven games and is looming large ahead of a huge game against Geelong next week.

But there was a sour note to its latest triumph, with tall utility Noah Balta substituted out of the match with a hamstring injury in the final term.

The Blues (9-4) also squandered the chance to draw level with each of the top three teams with 10 wins apiece.

Richmond kicked the first six goals in persistent rain on Thursday night and led by 28 points early in the final term before three goals from Harry McKay in four minutes flipped the game on its head.

A Jack Newnes’ snap appeared to have put the Blues back within three points with all the momentum on their side, but was correctly ruled touched on review.

Less than a minute later, Shai Bolton won a contest with Sam Docherty at half-forward and set up Maurice Rioli Jr, who passed off to Shane Edwards for the Tigers’ steadying goal.

Bolton had caused controversy at the start of the final term when he taunted Docherty on the way into an open goal and it almost came back to bite him.

The incident seemingly stemmed from an exchange during a three-quarter time melee, which flared up when Patrick Cripps took exception to a push from Dion Prestia that caused the Blues’ skipper to hit his head on teammate Sam Walsh’s leg.

Richmond midfielder Prestia (33 disposals, 13 clearances) stood up in the absence of superstar Dustin Martin, who missed through illness.

Liam Baker (27 disposals), Kane Lambert (22) and ruckman Toby Nankervis were also influential as the Tigers’ engine room got on top.

Cripps had 34 disposals in his 150th game and Walsh (34) was busy throughout against the tide, while McKay finished with four goals.

Richmond hung on in a performance coach Damien Hardwick described as “winning ugly”.

“We’re doing a lot of things right but our scoring profile is not where we need it to be,” Hardwick said.

“We’re getting a lot more inside-50s than our opposition and that’s been a staple of when we’ve had success.

“We want the game to look a certain way but we’ve just got to get better at generating shots at goal.”

Carlton, held goalless in the final quarter against Essendon in round 13, didn’t manage a major against Richmond until George Hewett’s hurried snap floated through at the 16-minute mark of the second term.

Who was the King? How Elvis Presley devoted his life to a consuming passion
AFL bans Bulldogs’ star Smith for two games
Today's Stories

Tigers hold off Blues in tight tussle at wet MCG