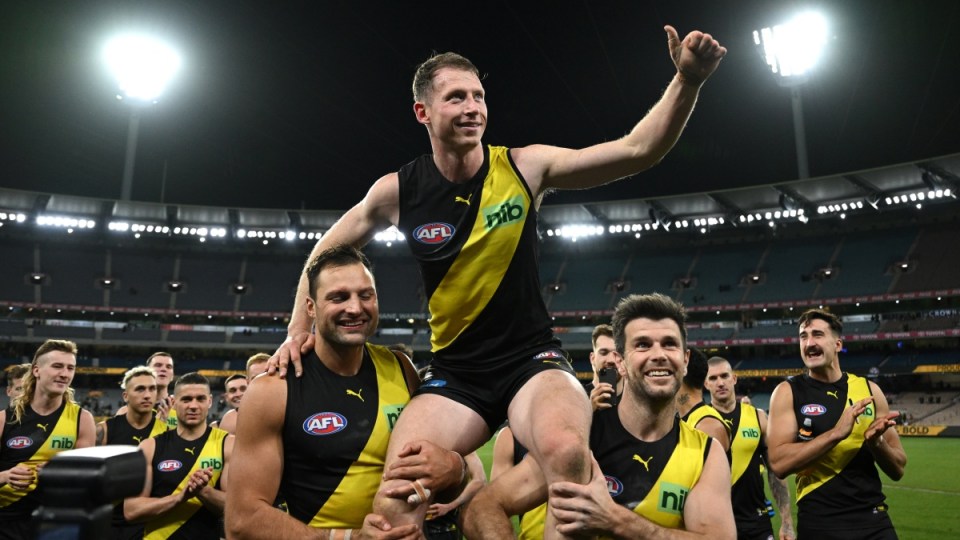 Richmond has scored a crucial 12-point AFL win over Port Adelaide, holding off the Power in a pulsating last quarter at the MCG.

It puts the Tigers back in the top eight with a 7-5 record, while the Power drops to 5-7.

Port suffered a triple blow early in the last quarter, with Tom Jonas and Zak Butters colliding heavily on the wing.

Jonas and Butters returned to the field with their faces bandaged heavily, but Butters had to go off again for more treatment.

It is unclear whether Power medical staff put the two players through concussion protocols while off the ground.

Connor Rozee kicked an outstanding goal on the run to reduce the margin to three points, but then Liam Baker snapped his only goal for the night and that gave Richmond enough of a buffer.

Baker was outstanding and his move into attack late in the game was crucial, while Shai Bolton and Jayden Short also gave the Tigers plenty of drive.

Port’s Karl Amon had a game-high 29 possessions, Tom Clurey was superb in the defence and Todd Marshall kicked three goals.

After Port kicked the first two goals of the game, Richmond took control and 18-year-old Judson Clarke had a dream start to his AFL career.

Clarke’s first kick was a goal and he kicked another a few minutes later as the Tigers threatened to take the game away from the visitors.

Shortly after Kamdyn McIntosh kicked the opening goal of the second term, Richmond led by 26 points.

But Port rallied and turned the tables.

Clearances and contested possessions have been an issue for the Power and after Richmond led the first stat 12-7 at quarter-time, Port turned it into a 27-14 advantage at the main break.

Likewise, Port led contested possessions 83-66 at halftime and only trailed by eight points.

A bit of razzle-dazzle from Rozee and the Power are back within a kick!#AFLTigersPower pic.twitter.com/Fwvx3xvtYr

After Richmond kicked the opening two goals in the third term, the Power rallied again.

When Kane Farrell took full toll of a 50m penalty and kicked a long bomb, the Power were only one point behind at the last break.

Martin sent a major scare through the Tigers in the third term when teammate Jack Riewoldt kneed him in the back of the head in a marking contest, but the Richmond star waved off medical staff.

The Power lost Trent Dumont to a leg injury late in the third term.