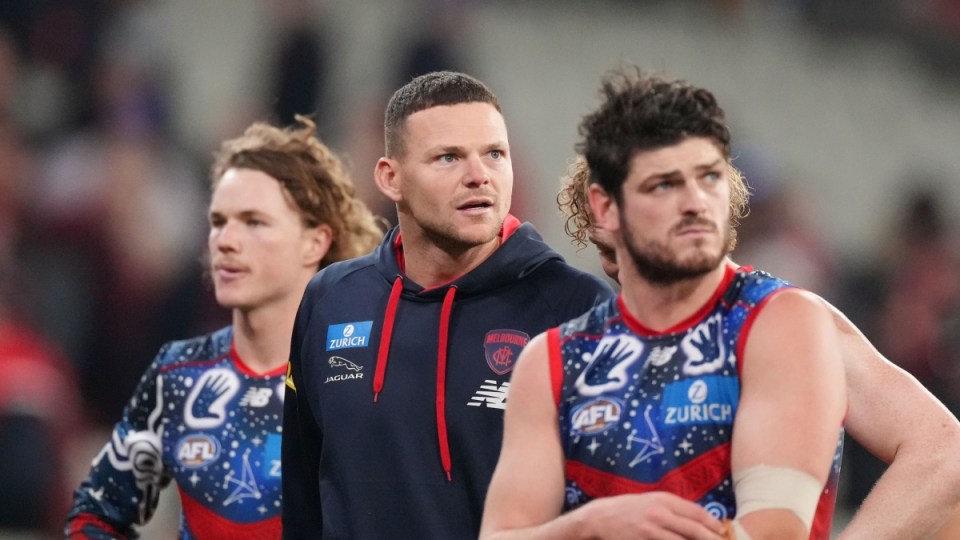 The AFL is investigating Steven May [centre] and Jake Melksham's fight at a Melbourne restaurant. Photo: AAP

Melksham required surgery on an infected hand injured in the fight, while May was suspended for the Queen’s Birthday blockbuster against Collingwood after the pair brawled inside and outside Prahran restaurant Entrecote on Sunday night.

“The AFL confirms it is looking into the incident between Steven May and Jake Melksham that transpired on Sunday evening,” the AFL said in a statement.

“No matter what the situation or circumstances, violence is never the answer.

“As professional footballers, as people, we expect better and while the club has taken the matter extremely seriously, the AFL is currently conducting its own investigation.”

“It’s a poor look,” McLachlan said at a press conference in Hobart.

“Max Gawn, he’s embarrassed, it’s unacceptable. I think Max is one of our great leaders and I agree with him.”

Melksham and May had both been drinking at the dinner with several teammates, when what captain Gawn described as “hurtful banter” escalated into the “horrible act” of a physical fight.

May received a one-match ban from the club for drinking while in the AFL’s concussion protocols and apologised on Tuesday while both he and Melksham are required to complete community service.

The Demons have lost two on the bounce and could have done with the services of star defender May, who was concussed in the loss to Fremantle and sidelined in the defeat to Sydney, against Collingwood.

But Melbourne stressed their club values came ahead of picking May.

On Wednesday, Gawn admitted he was disappointed the other players at the restaurant hadn’t stopped May from drinking but stressed the buck ultimately stopped with the 30-year-old.

May had said he and Melksham were still friends but Gawn expected it to take time for the relationship to fully mend.