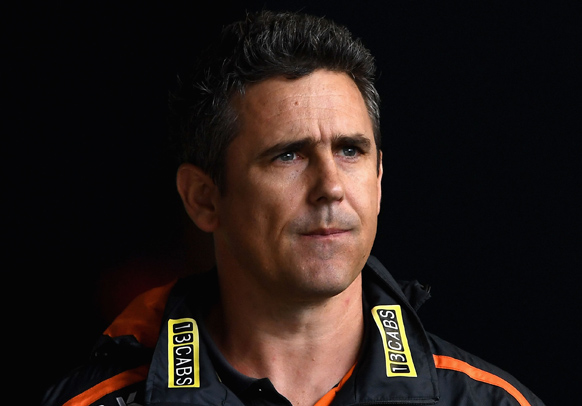 Giants head coach Leon Cameron is stepping aside after nine years in charge of the AFL club. Photo: Getty

Cameron said on Thursday it was a mutual decision.

Assistant coach Mark McVeigh will take over as assistant after Sunday’s match against Carlton.

“As much as sounds hard, it’s a good decision,” Cameron, 49, said at a club media conference.

Giants chief executive David Matthews and chairman Tony Shepherd paid tribute to Cameron, saying he had not just built a team, but a football club.

Cameron will end his nine-year tenure at the Giants with the club languishing in 15th spot on the ladder with just two wins from eight games.

The Giants were poor last Saturday when Geelong beat them by 53 points in Canberra, with Cameron lamenting “we were boring at times”.

Cameron’s departure will pave the way for the Giants to chase renowned master coach Alastair Clarkson to become the club’s third coach since joining the AFL in 2012.

Clarkson is taking a year away from football after departing as coach of Hawthorn, where he won four premierships between 2005 and 2021.

Cameron has been at the helm of the Giants since 2014 when he replaced Kevin Sheedy, who coached the club for their initial two seasons.

Cameron has a record of 94 wins, 81 losses and four draws. He took the club to the 2019 grand final when thrashed by Richmond and reached the finals in five of his nine seasons, including last year.

But he was widely expected to not be offered a fresh contract for next season amid the Giants’ middling results in 2022 when they have beaten only Gold Coast and Adelaide.

After his club’s win over the Suns on April 2, Cameron revealed his future beyond this season had been put on hold.

“We had a really good meeting with the club just before the season started and we’ll assess that at the end of the year,” Cameron said at the time.

“I’m a nine-year coach, 10 years at the footy club, and sometimes trying to work through a contract in the hurly burly of week-in, week-out footy is pretty full-on.

“I think it’s a really smart decision from the footy club. It’s an honest decision.”

Melbourne coach Simon Goodwin said it was always a sad day in the game when a person of Cameron’s quality steps away.

“I’m sure as a coaching fraternity we’ll reach out to Leon and get that support around him.

“But I’m sure it won’t be the last we see of Leon in our industry, he’s a fine coach and a fine person.”