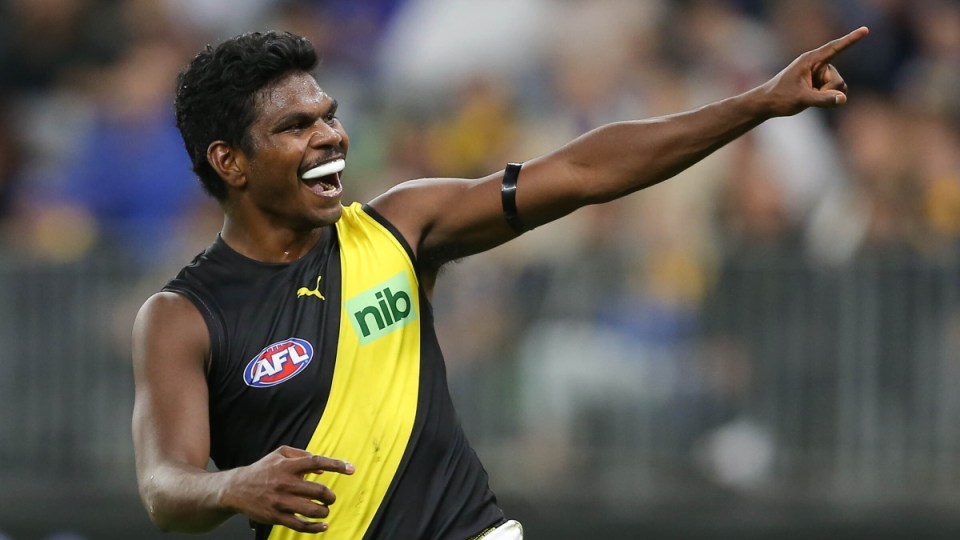 Josh Kennedy’s 700-goal milestone has been soured after West Coast produced yet another Friday night flop on the way to a crushing 109-point AFL loss to Richmond at Perth’s Optus Stadium.

Just two weeks after conceding the first 56 points of the match against Sydney, West Coast trailed Richmond 67-10 in the second term.

The Tigers continued to pile on the pain in the second half to post the percentage-boosting 25.15 (165) to 8.8 (56) victory, with the result leaving West Coast on the bottom of the ladder with a 1-5 record.

Kennedy’s fourth goal late in the match brought up his 700-goal milestone, becoming just the 25th player in AFL/VFL history to achieve the feat.

But by that stage a significant chunk of the 39,430 crowd had already left in disgust.

Richmond forward Tom Lynch reached his 400-goal milestone in the opening term before finishing the match 7.5 to go with a monster eight contested marks, while Jack Riewoldt booted four goals.

Shai Bolton starred through the midfield and up forward to finish with 30 disposals, three goals and six score assists, while Jayden Short, Kamdyn McIntosh and Kane Lambert also had big games.

The only sour point for the Tigers was an ankle injury to Dion Prestia.

West Coast’s horror day was further compounded by a hamstring injury to Willie Rioli, who was subbed off at halftime.

Defender Tom Barrass was a late withdrawal with his own hamstring complaint.

Since beating Richmond by four points in round 13 last year, West Coast has returned a 3-13 win-loss record to be the worst performing team over that period.

Eagles have sunk to even lower depths

A glut of injuries and a devastating COVID-19 wave have ruined West Coast’s start to the season.

Despite the return of a bulk of their stars, somehow the club has sunk to even lower depths, with their three most recent losses being by 63, 84, and 109 points.

The insipid nature of its latest defeat evoked memories of West Coast’s 135-point loss to Geelong at Subiaco Oval in 2008, when then-Cats coach Mark Thompson was so relaxed he began eating a giant roll while the game was still going.

West Coast’s lack of urgency against Richmond was evident to see from the outset.

But even more diabolical was the team’s continual turnovers, with Richmond feasting on the easy pickings to pile on the pain.

From that point on it was a Richmond avalanche, kicking nine straight goals either side of quarter-time.

The scoreboard damage would have been even greater if Lynch’s radar wasn’t so off early.

Lynch, playing his 200th match, booted 2.3 in the opening term, but the inaccuracy mattered little given the manner in which West Coast kept turning the ball over.

The 63-point margin at halftime meant the game was already over, but Kennedy fought hard to boot four second-half goals to break through the 700-goal barrier.

The result improved Richmond’s record to 3-4, and it could be bolstered by the return of Dustin Martin for next week’s blockbuster against Collingwood at the MCG.

Veterans Trent Cotchin and Robbie Tarrant will be back against the Magpies after being rested for the trip west.