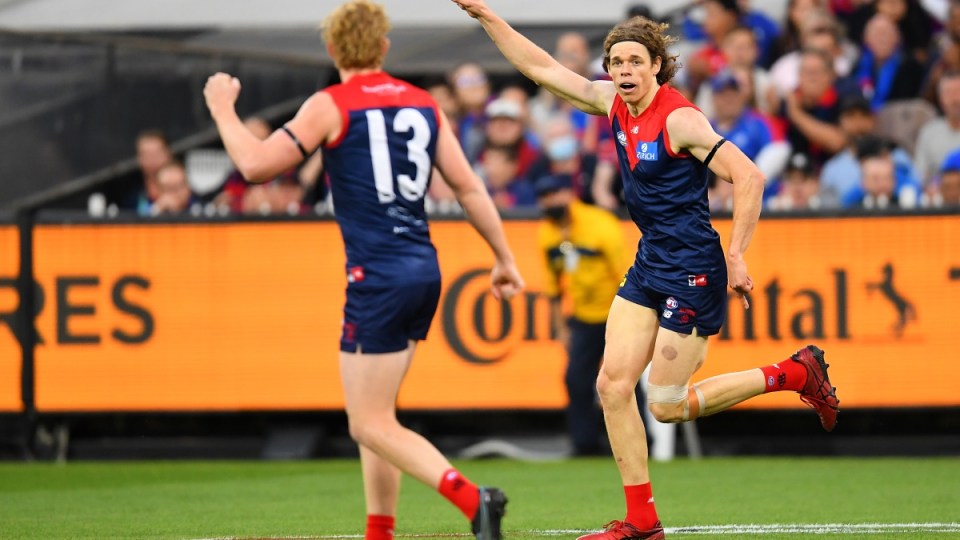 Melbourne has toppled the Western Bulldogs again, winning a topsy-turvy Grand Final rematch by 26 points in the AFL season-opener at the MCG.

The Demons stormed out of the blocks on a night when they unfurled their first premiership flag in 57 years, with the first-half playing out in eerily similar circumstances to last year’s decider.

After booting the first four goals of the match, Melbourne then had to withstand a blistering surge as the Bulldogs piled on the next eight majors.

The parochial Demons crowd was treated to scintillating football in-person, after having to watch Melbourne’s magical run to the premiership while in lockdown.

After having a quiet first-half, captain Max Gawn stepped up when the game was on the line, nailing a crucial set-shot from beyond 50m midway through the final quarter.

Hardnut James Harmes then sealed the result for the Demons, converting from point-blank range after bringing down a terrific mark.

Christian Petracca almost matched his Norm Smith Medal-winning performance, gathering 38 possessions and booting two goals to be the most influential player on the ground.

“Once again, our ability to adapt and reset ourselves and get back to the core way we play (was impressive),” Demons coach Simon Goodwin said.

“It’s a great way to start in front of our supporters in a pretty big game for our footy club.”

There could be more improvement in the forward line, with full forward Ben Brown in tremendous touch by kicking four goals after a sluggish start to his first season with the Demons in 2021.

The Bulldogs battled bravely and hung in far better than they did in the grand final when they conceded 16 of the last 17 goals, but were still outclassed.

Aaron Naughton flew out of the blocks, booting four goals in an imposing performance from the strong-marking Bulldogs forward.

“The opportunities of not being able to capitalise when we had that momentum and their connection inside-50 started to come to the fore,” Bulldogs coach Luke Beveridge said.

“It was a disappointing night, all in all.”

Beveridge has more concerns than just the defeat, with captain Marcus Bontempelli struggling with an ankle injury.

Runner-up in last year’s Brownlow Medal, Bontempelli twice went off the ground in the third quarter to receive medical attention.

But the Bulldogs superstar was able to return to the ground, kicking a vital goal in the final term and running out the game, but was clearly hampered by the injury.

It came after bizarre pre-match circumstances when midfielder Lachie Hunter was demoted to medical sub, before coming back into the starting-22 just 10 minutes before the match when Jason Johannisen was a late withdrawal.

Beveridge had bristled at a report earlier in the week claiming premiership player Hunter would be left out due to his poor form.

The Demons will be sweating on the fitness of half-back Christian Salem (knee), who was subbed out for Toby Bedford in the first quarter.