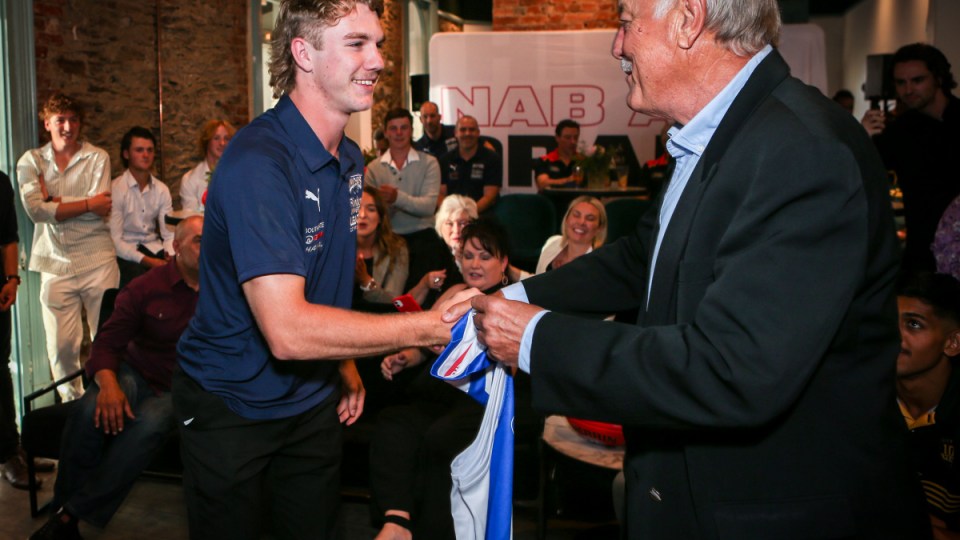 Old Shinboners had every right to feel sentimental as No.1 AFL draft pick Jason Horne-Francis was presented with his North Melbourne jumper by Kangaroos legend Malcolm Blight.

The talented South Australian was, predictably, selected as the best player among this year’s draft crop after North chose not to bid on highly rated father-son prospects Nick Daicos and Sam Darcy.

The Kangaroos held the top pick for the first time in an AFL national draft and used it to select the classy midfielder on Wednesday night.

Blight, who won a Brownlow Medal and played in the Kangaroos’ first two premierships in 1975 and 1977, was on hand to congratulate Horne-Francis in Adelaide.

As well as his North connection, Blight is widely regarded as one of the best footballers in South Australian history.

Although he was a certainty to be selected by North, Horne-Francis did not instantly have the news relayed to him.

“It was a bit weird. We couldn’t see much and luckily my manager hooked us up with his phone,” he told Fox Footy.

“Definitely a lot of excitement. I can’t wait to get into things with the North Melbourne footy club.

“I think North are on the right direction. They’ve got a lot of young talented midfielders and I think I can learn a lot off players at the club.”

There was early drama on draft night when the Kangaroos’ first selection was delayed by two live trades as the Western Bulldogs acquired more draft points to match a bid for father-son prospect Sam Darcy.

It came from Greater Western Sydney at pick two and the Dogs wasted no time matching it to secure the 205cm ruck-forward.

The Giants have got themselves a seriously smooth mover.

The Giants instead gained midfielder Finn Callaghan at pick three before Gold Coast’s bid on Collingwood father-son prospect Nick Daicos at pick four was immediately matched by the Magpies.

The Suns then landed athletic ruck-forward Mac Andrew, who had been part of Melbourne’s Next Generation Academy.

The Demons were unable to take Andrew from the Suns because of new rules that prevent clubs matching bids for NGA players inside the top 20.

Fremantle was the only club with two top-10 selections and used them on a pair of local Western Australian products, snapping up key forward Jye Amiss and midfielder Neil Erasmus.

The remainder of the national draft will be held on Thursday night, starting with the Dockers’ third selection at pick 21 overall.

Let’s face it – we’re addicted to polls, even if they’ve got things so wrong in the past
Carlton CEO Brian Cook tests positive for COVID-19
Today's Stories